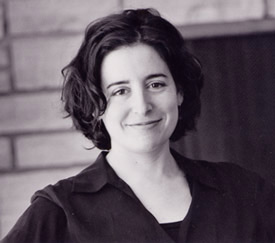 Aimee Bender is the author of two collections of short stories, two novels and one novella, and her work has been published in Granta, Tin House, Harper’s, McSweeney’s, and The Paris Review. A self-proclaimed tale-teller, Bender’s stories are magical but never flippant, often alien but never alienating. Bender has graciously agreed to answer Full Stop‘s questions about the writing life and her fabulous new novel The Particular Sadness of Lemon Cake.

The Particular Sadness of Lemon Cake is a novel about a girl, Rose Edelstein, who develops an ability to perceive the emotional condition of whoever prepares the food she eats. She comes from a family whose tension is mounting, its secrets piling up, and around the dinner table she most often registers anxiety, detachment and disappointment. The novel strikes a really fantastic balance between whimsy and sobriety, where a surreal plot functions as a threshold into a very real examination of unspoken needs and domestic dissatisfaction. Did you begin with the idea for Rose’s peculiar faculty or with her family circumstances?

They arrived at the same time — I think often for me, magic is a way into emotional territories, so I’m not even aware of its use but it kind of pulls me there. When it seems to be working well, that is; often I write magical things that just take me nowhere. The desire to get at some emotional experience/state/way of living is one of the main drives, for me, and I will use any tool I can find to get closer to it. I do like the word you use here, ‘sobriety,’ as a counter to whimsy. Geoffrey Wolff, a formative teacher for me, once told me that the danger of any magic was potential cuteness, and he’s so right — it seems to work best for me when it leads somewhere dark and is a way into an exploration of some kind of darkness.

The novel inverts the idea of comfort food so that whatever’s cooked in the home makes the protagonist feel lonely and displaced. What relationship do you observe between food and family, or food and home?

I did want to do just that — to undo comfort food, to question what comfort is. Yes, a mac and cheese can be very soothing and delicious, but is it true comfort? What is actual comfort? It’s a question that continues to interest me. Family and food are so incredibly intertwined to me that it’s impossible to separate the two, but often food is positioned as the object of warmth and closeness and I wanted to go at it from a different angle.

Why did you decide to set the story in Los Angeles? Is L.A. a particularly surreal backdrop, or a hub of domestic fantasy, or just a familiar place?

It wasn’t a calculated decision — more that I wanted to write about a place I know well. But I also did want to present a ‘daily L.A.’ vs. the glamour gritty L.A. we often see. A couple people (who live elsewhere) told me after reading the book that they hadn’t seen L.A. in that way, as a kind of normal place to live, which was very gratifying to hear! We go to the market here, and walk around, and do our daily lives.

I’m a bit late encountering the term “slipstream.” It was coined by the writer Bruce Sterling (Tomorrow Now, A Good Old-Fashioned Future), who wrote of it:

“It is a contemporary kind of writing which has set its face against consensus reality. It is fantastic, surreal sometimes, speculative on occasion, but not rigorously so. It does not aim to provoke a ‘sense of wonder’ or to systematically extrapolate in the manner of classic science fiction. Instead, this is a kind of writing that simply makes you feel very strange; the way that living in the late twentieth century makes you feel, if you are a person of a certain sensibility. We could call this kind of fiction Novels of Postmodern Sensibility, but that looks pretty bad on a category rack, and requires an acronym besides; so for the sake of convenience and argument, we will call these books ‘slipstream.’”

I was in the middle of your novel when I read this, and you naturally came to mind. Have you come across this term before? How well do you think it applies?

I like this term, too — I think it’s one of the most useful ones. I was in an anthology once that was wonderfully titled “Feeling Very Strange”. And I was on a panel about Slipstream, too, which is when I became familiar with the term. I think it applies extremely well, and fits someone like Murakami who I just love — there’s a lot of room with slipstream to talk about the experience of the reader, the uncanny worlds a reader might explore with a writer, and I also like it that slipstream has a musicality to it as a word, vs. a more academic term. Victor LaValle‘s Big Machine fits really well under this too. Kelly Link. Lots of people fit comfortably under “slipstream” that wouldn’t under other titles.

I’ve seen you referred to as a fabulist before, too, but then fables peddle lessons whereas your work seems to avoid moral neatness. Do you see yourself as writing postmodern fables, keeping the chimerical but chucking the cautionary?

These are good questions! “Fables peddle lessons” — I want to make that into a haiku somehow. I agree — fables tend to indicate something lesson-like, and the last thing I want to do is prescribe behavior. Tales seem to fit better — the fairy tale is often considered a moral teaching but it often isn’t — it’s just a story that winds its way somewhere, and hopefully is entertaining and resonant along the way.

I heard you mention in another interview that you stick to a pretty strict work regimen, where you compel yourself to sit still and write for about two hours every morning. Does it get boring and frustrating at times? Might there be some value for an artist in subjecting oneself to boredom or frustration?

It’s often, often boring and frustrating. I think that’s the ticket. I’ve been happily quoting Adam Phillips, a British psychoanalyst who says that with boredom, the child is waiting for himself. It is an uncomfortable, often deeply uncomfortable space, but on the other end of it is something. I once assigned this to a class: be bored for half an hour. One student in particular, a super go-getter active extravert, was horrified. It was the worst homework I could’ve given him. I can get pretty restless and distracted and the strict rule helps me stay put, even when restless.

You’re pretty prolific thanks to that regimen. Do you ever allow yourself periods of non-writing or idea-gathering?

Since I just sit there for the two hours, often it’s non-writing. Non-writing as sitting. But I don’t really idea-gather — in fact, the regimen makes it easier to not think about writing the rest of the day, and I very very rarely have an idea during the day that actually goes anywhere. My ideas are usually about one sentence long. My favorite part of Lorrie Moore’s classic “How to Become a Writer” is her list of notes the writer puts down for story ideas, and they are all totally ludicrous, my personal favorite being, “A woman gets on a bus.” That’s pretty much what my idea gathering looks like! But on the practical level, once I finish a book I usually take a couple months off which feels very luxurious and fun.

You contributed a pep talk for participants in National Novel Writing Month wherein you wrote, “My friend Phil once said that if I wrote every day what I felt like writing that day, then my writing would not be dutiful. It would have life and interest in it. It was one of the sagest pieces of writing advice I ever got.” Will you elaborate on this for us? What is dutiful writing, and what is its opposite?

Yes. Phil Hay. Wise words. Dutiful writing is writing that is driven by a ‘should’– “I should write that scene;” “I should write about a character who is sympathetic;” “I should write a better plot.” It tends to dry up on the page because it is not coming from a deeper place. Its opposite is lively writing that comes from the writer’s true interest and unconscious — and the writer really does not know what this will be before sitting down. It is a rare writer who can think: I want to write about dogs, and then sit down and do it. Our minds are often just not that organized. I find that what I think I want to write about and what I really write about are usually very different. So to write what I feel like writing each day, what I find interesting on that day, even if it’s not what I’m supposed to be doing — that has been the best way to work for me. It blasts all the ‘shoulds’ away and is my best chance of actually being engaged with the work.

Do you find yourself rummaging through your autobiographical backlog for events and emotional responses that you can incorporate into your work?

What’s it like writing a novel as opposed to a short story collection? Can you say which you prefer, or are they too different?

I loved stories first so they’re still my easier place to go. Though right now all my stories are 30+ pages because I think I’m still in novel-mode. Novel writing feels harder, and evokes Flannery O’Connor’s quote about losing hair and needing to go to the dentist. Or maybe she says your teeth fall out while writing a novel. It’s a rough exercise in faith and patience, but it’s also intensely rewarding for that same reason.

What have you been reading lately? Anything blowing you away?