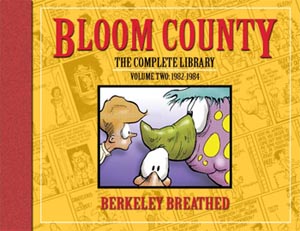 The amount of space allotted for Sunday strips has been slowly shrinking for decades. Thank goodness there was still enough space in 1983 for Berkley Breathed to spend seven Sunday strips commemorating a cat’s death by acne. And thank goodness those strips, along with the entirety of his comic Bloom County, are being collected in IDW’s multi-volumed Bloom County: The Complete Library.

Bloom County appeared in newspapers from 1980-1989 with an ever evolving cast of young miscreants and woodland animals. Included in this number is Oliver, a 10 year old who is able to hack into the New York Times and change headlines; Binkly, a media-obsessed child whose anxieties manifest in his closet every night; Portnoy, a groundhog and a bigot; and Opus the Penguin, a wide-eyed, tuba-playing, vice presidential hopeful whom Breathed considered “an innocent amidst the insane.” He is highly susceptible to infomercials.

I’ve loved Bloom County for years. When I was in elementary school (in the 90’s), my brother and I found our parents old Bloom County collections with titles like Penguin Dreams and Stranger Things, Tales Too Ticklish to Tell, The Night of the Mary Kay Commandos and- of course- Billy and the Boingers Bootleg. Bloom County felt like a secret. It was silly enough to engage an 8 year old, yet timely enough to feel alien. The spirited critique of Reaganomics was over my head, but I could still laugh at the name “Casper Weinburger” and a Penguin declaring “Ted Koppel is a waffle.” Bloom County thrives on the mix of pointed satire and the absurdly whimsical.

So far, IDW has published three volumes of the complete Bloom County with a fourth volume coming soon. Though so much content might be overwhelming, a great place to jump in would be Volume 2: 1982-1984, since the characters are still being work-shopped at the beginning, but by the middle the main cast has been established. Gags which run throughout the series are conceived: the yellow journalism and depressing personal ads of the Bloom County Beacon, Binkly’s anxiety closet, and the inception of The Meadow Party (whose presidential candidate is the aforementioned Bill-the-Cat, who has already died at the time of his nomination). Included amongst these storylines are the forgeries of Elvis’ secret diaries (written on Dukes of hazard stationary), Opus’ journey as a stow-away on a green peace vessel to find his mother in Antarctica, and the long-winded trial and exoneration of an obvious axe-murderer.

Bloom County is one of the sharpest, silliest, and sweetest comic strips out there. It’s no surprise that Berkely Breathed has been making children’s books since ending Bloom County. He has also written the newspaper comics Outland and Opus, but Bloom County remains his magnum opus.