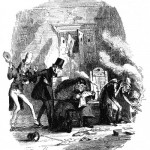 Many people, even avid readers, are intimidated by Charles Dickens’ novels because they are long, somewhat difficult to get into, they were written in the nineteenth century, and they are considered “high art” (and thus it must not be possible to read these books for fun!). On the contrary, Dickens’ novels are absolute escapist fiction. Want a rollicking storyline full of interesting characters and a satisfying happy ending (you wade through some tragedy to get to the happy ending, but get there you will)? Just pick up a novel like Nicholas Nickleby, Dickens’ third novel, published serially in 1838-39.

The pleasure people got from reading Dickens serially in the nineteenth century – reading one installment that ends in a cliffhanger and then having to wait in anticipation for a week or two until another section was published – prefigures the way we watch television today. Like today’s television-watchers, who schedule activities around their favorite shows, the nineteenth-century’s novel-readers no doubt experienced a sense of delayed gratification and of belonging to an excited group of followers.

In his early novels Dickens’ characters are more straightforward than in later novels: either “good” or “evil,” it does not take long to figure out who falls into which category. But that does not mean Dickens cuts each character from the same mold. Part of what makes Dickens so fun to read is his vivid descriptions that, like the best of fiction, help our imaginations bring characters to life. In Nicholas Nickleby, Dickens saves some of his best descriptive language for Newman Noggs, Ralph Nickleby’s clerk. When we first meet Noggs, his appearance is certainly not inviting:

[A] tall man of middle-age, with two goggle eyes whereof one was a fixture, a rubicund nose, a cadaverous face, and a suit of clothes (if the term be allowable when they suited him not at all) much the worse for wear, very much too small, and placed upon such a short allowance of buttons than it was marvelous how he contrived to keep them on.

And his actions are even quirkier. Noggs, a man of few words, often stands and “[rubs] his hands slowly over each other: cracking the joints of his fingers, and squeezing them into all possible distortions.” Our Dickensian narrator tells us that,

The incessant performance of this routine on every occasion, and the communication of a fixed and rigid look to his unaffected eye, so as to make it uniform with the other, and to render it impossible for anybody to determine where or at what he was looking, were two among the numerous peculiarities of Mr. Noggs…

You can picture Noggs methodically cracking his fingers as he stands stiffly in a too-small suit with an impassive face. Not exactly the sort a reader would be immediately attracted to. But in this novel Noggs is one of the more complex characters because we must peel away layers until we reach the true man beneath. Perhaps Dickens means us to judge him by sight first, to be wary of this character who, after all, works for the book’s villain, Ralph Nickleby. Noggs’ outward appearance allows him to set in motion the events leading to the happy ending. He doesn’t look inherently good and can thus play for both teams, so to speak. Ralph Nickleby does not suspect Noggs of being the information-uncoverer until it is too late (for Ralph, that is). Were this a TV show, Noggs would be that character always lurking outside the door, always standing a bit too close, always acting slightly strange. But we would love him for it, as we do in Dickens’ novel.

Dickens is known for his vivid descriptions of characters’ appearances, but he also employs auditory descriptors, such as his representation of John Browdie’s Yorkshire accent: “Beatten the schoolmeasther! who ever heard o’ the loike o’ that noo! Giv’ us thee hond agean, yoongster. […] Dang it, I love thee for’t.” Even if you’re not familiar with a Yorkshire accent itself, you understand that it’s different from how the other characters speak merely because of the way Dickens vibrantly reproduces it, further drawing the reader into his world.

If nothing else, Nicholas Nickleby is worth reading for the descriptions and actions of Newman Noggs and the hilarious accent and exploits of John Browdie. But a Dickens novel also allows us to escape into the completely different and fascinating world of nineteenth-century England. We travel with Dickens’ characters, from the country to Yorkshire to Portsmouth but always returning to London, the story’s focal point. We ride for days in bumpy and overcrowded coaches in the middle of winter, and we walk miles and miles over the countryside with Nicholas and Smike. Like his scenery, Dickens’ characters also help set the tone: Mr. Crummles, “talkative and communicative, stimulated…by his natural disposition,” entertains us; Ralph Nickleby, “stern, hard-featured, and forbidding,” whose eyes “twinkl[e] of avarice and cunning,” fills us with foreboding and spite; Nicholas’ naïve yet unflagging optimism gives us hope; Kate Nickleby’s beauty and loyalty softens us; Smike’s gentle earnestness inspires pity; the eternally “kind face[s] and manner[s]” of the Brothers Cheeryble make us grateful on the Nicklebys’ behalf.

Part of the joy of reading Dickens is that we don’t have to analyze. Material for analyzing is there, of course, and that’s why we study literature, but we can also just take the plots and characters at face value and let ourselves sink happily into another world. A novel like Nicholas Nickleby makes us part of its world by planting us in dark, dingy, depressing Dotheboy’s Hall only to place us back in the light of the concluding banquet, where the “good” characters sit and we feel “grand and complacent,” “devoted and proud,” and “subdued yet overjoyed” right along with them.