The following is from the latest issue of the Full Stop Quarterly. You can purchase the issue here or subscribe at our Patreon page. 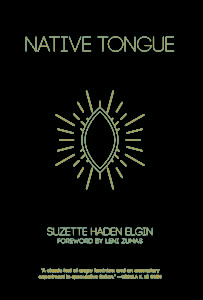 The literary genre of feminist dystopian fiction was not born on the evening of November 8, 2016, though the casual reader could be forgiven for thinking otherwise. In the three long years since the election of Donald Trump, pop culture has been inundated with a swell of stories about women fighting back against
draconian, at times barely-fictional patriarchies: The Power, The Water Cure, Red Clocks, Vox, to say nothing of Hulu’s adaptation of The Handmaid’s Tale — the towering matriarch of the genre — and Margaret Atwood’s rabidly anticipated sequel, The Testaments.

Arriving alongside the Republican Party’s emboldened assault on women’s rights, this new wave of feminist dystopias has managed to be incredibly timely and, at the same time, curiously stale, outpaced at every turn by a news cycle unburdened by the restraints of fiction. These books, it must be said, are generally well written, and occasionally inspiring. As polemics against misogyny, they succeed. But as works of imagination they feel oddly stilted, especially when it comes time to actually depict said resistance. Too often, this work is left offscreen or simplified, or distilled down to a sole cathartic event where the decision to rise up and fight back is framed as the climax of the process. This is a nice sentiment, but not a very useful one, in part because it doesn’t teach us anything about what comes next, and in part because it presents patriarchy as a regime to be toppled, rather than a virus that has wormed its way into every strata of society and infected our very way of thinking. In other words, our new canon of feminist speculative fiction has largely neglected what ought to be a central question of the genre: how does one defeat a totalitarian affliction as deeply entrenched as patriarchy? And how might we build a better world in its place?

For answers, one might look to Suzette Haden Elgin’s Native Tongue trilogy, which began in 1984 and has been given a desperately needed reprint by the Feminist Press this year for its thirty-fifth anniversary. A forgotten classic of the genre — it beat The Handmaid’s Tale to publication by a year — Native Tongue is heady, strange, and granularly obsessed with the machinery of power and misogyny. There are aliens and spaceships, pulpy eighties plots about humans living on asteroids and such. But Native Tongue’s true focus is the role that language plays in the creation of reality, and our perception of reality: a thousand page thought experiment in the guise of a sci-fi epic.

Native Tongue begins in the late twenty-second century, when human colonization has expanded across the galaxy and Earth’s economy has grown dependent on the technology of advanced alien races. Unfortunately for Earth, these aliens’ languages are far beyond the grasp of most humans, leaving planetary commerce reliant on a league of thirteen families known as the Linguists. By training their children from infancy in the art of “interpreting” — translating — alien languages, the Linguists alone have mastered the ability to communicate with the aliens, and as such have retained enormous political control. Meanwhile — because this is a feminist dystopia, after all — an amendment to the US Constitution has relegated women to the legal status of minors, banning them from voting, working, owning property, and holding their own money. Their only purpose, as far as male society is concerned, is for marriage and bearing children. Once the women have outlived their childbearing years, they’re sent to “Barren Houses” to knit, gossip, and wait to die. The men of the novel, meanwhile, see themselves as righteous guardians, pointing to “science” that “proves” women are intellectually inferior to men and declaring that they’re protecting women from the impossible mental strain of running for office or learning to count. Critics at the time complained the men of Native Tongue were almost cartoonish in their condescending cruelty; reading the book today, it’s hard to picture the male characters as anything other than assorted varieties of Mike Pence.

Yet these men, so convinced of their mental superiority, have failed to notice that the women have instigated a quiet rebellion right under their noses: a language of their own. This “women’s language,” called Láadan, is invented to fill a linguistic hole: experiences and feelings “that so far as we know have never been chosen for naming before in any human language . . . a chunk [of reality] that has been around a long time but has never before impressed anyone as sufficiently important to deserve its own name.” Limited at first to hushed whispers and basement rooms, Láadan slowly spreads over the course of the trilogy from household to household, Barren House to Barren House, until finally a parallel society of women has begun to emerge, spreading across the planet and beyond, to the stars.

In a society where communication is the paramount form of power, it only follows that a reordering of political control must begin with language. So it is with Láadan. At first, the language is conceived as a means of solidarity, to give validation to those emotions and situations most familiar to women. This includes such terms as emotional labor (radíidun), togetherness (wohosheni), eating as a means to reclaim control in one’s life (doroledim), to refrain from asking a question, “out of courtesy or kindness” (raimime), and its opposite, “to refrain from asking, with evil intent; especially when it is clear that someone badly wants the other to ask” (ramimelh). It reclaims a girl’s first period as a joyful sign of coming adulthood, and rephrases parables from the Bible on explicitly female terms.

By the second volume, The Judas Rose, the women have begun a gradually escalating battle of wits against the men, employing double agents to spread Láadan into churches and hospitals and employing its uniquely female perspective to undercut the men’s patriarchal tendencies. As one of Láadan’s creators muses, imagining the future, Láadan “would continue to keep [the women] immune to the state of violence that the men struggled with so incessantly; it would continue to provide the women with the patience necessary to bring the men out of those endless loops of violence always begetting more violence.” And as more children — boys and girls — learn Láadan in their infancy, its values of empathy and generosity grow increasingly normalized, replacing the language, and values, of institutional misogyny.

Such ideas are not merely the stuff of science fiction. This philosophy forms the basis of the real-life Sapir-Whorf Hypothesis, which argues that language not only reflects reality, but actively creates it. As Susan M. Squier and Julie Vedder observe in their afterword to Native Tongue, the Sapir-Whorf Hypothesis notes that language is our primary tool for understanding the world and how to engage with it. On a broad scale, this informs societal beliefs about everything from race to ethics to politics to yes, gender. “Assumptions about gender roles are everywhere [in English],” Squier and Vedeer write, “particularly in our habit of binary thinking, through which the paired terms male/female become associated with other pairs: active/passive, strong/weak, right/left, and so on.” The implications are clear. If a society’s primary language prioritizes the interests or experiences of a certain group of people — men, for example — it teaches its speakers to prioritize those experiences as well, and to deprioritize those of women, transgender, and nonbinary people.

The Sapir-Whorf Hypothesis remains controversial in some philosophical circles, and by the end of the trilogy, Elgin herself seems resigned to the idea that Láadan would be a failure. (The third book, Earthsong, takes a sharp left turn that is far too weird and complex to even summarize here.) And yet the last several years have seen something of a real-world test of this idea, as terminology previously limited to activist or academic circles — intersectionality, rape culture, the male gaze — have punctured and begun to shape mainstream culture. This includes #MeToo, whose fight to center women’s lived experiences is, in essence, a titanic battle over language and the way we think about sexual assault, one that has led to the fall of powerful men and a sea change in the public conversation.

A significant piece of this conversation was the dawning acceptance of how deeply masculine views have shaped our thoughts and perceptions. Jill Filipovic observed in The New York Times that many of the journalists who dismissed Hillary Clinton as cold, dishonest, and unlikable — and quite possibly cost her the 2016 election in the process — were, in fact, men, leading Filipovic to wonder how public perception of Clinton might have changed had the journalists been women. In his roundup of the best movies of 2017, New Yorker film critic Richard Brody took this idea one step further, devoting his entire introduction to the “gaps” of female filmmakers whose careers have been derailed by men like Weinstein, and whose potential impact on popular culture will never be known. This past year, for example, saw the release of Olivia Wilde’s wonderful Booksmart, which took a genre dominated largely by dick jokes and female objectification and reinvented it as a celebration of queerness and female friendships. One wonders how different our values might be had we previously elevated the worldviews of women and queer and nonbinary people instead of men. What we talk about matters. How we talk about it matters.

In this way, Native Tongue’s fascination with language makes it an urgent and prescient read in 2019, despite its admitted flaws. As a novel, a work of fiction, the book is occasionally clunky: its storylines wandering, its characters half-sketched. (Its most rounded character is Michaela Landry, who embarks on an Arya Stark-esque quest to assassinate the Linguists before eventually being recruited to the Láadan cause.) Yet Elgin resolves these issues in fascinating ways in The Judas Rose, the second and richest book in the trilogy. Whereas another author may have channeled a messy narrative into a more streamlined sequel, Elgin instead explodes the book into a panoramic epic, tracking Láadan fluidly as it circulates throughout the galaxy. Flitting from character to character and planet to planet without a protagonist in sight, The Judas Rose abandons a traditional narrative structure in favor of a vast collective all working together towards a common goal—and in doing so, offers a method of storytelling that reflects the values of its core language, Láadan.

In retrospect, Native Tongue’s failure to break into the mainstream shouldn’t come as a surprise. Elgin may be the epitome of a writer’s writer, filling Native Tongue with dense linguistic musings on the ways that words shape our politics, our culture, our sense of self, and how they can be wielded to reform those structures from the inside out. And as the narrative of the trilogy sprawls out across hundreds of years, it reminds us, too, that systemic structural change is slow — the work of generations. Both of these things may be true, but they don’t exactly make for riveting page-turners. So in the end, the Native Tongue trilogy is a paradox: a brilliant illustration of how feminist writers might use genre to grapple with the problems of patriarchy, and a striking example of why such a book will never break the New York Times bestseller list. Writers will love it. Don’t hold your breath for the Hulu adaptation.

Will Preston’s writing has been nominated for the Pushcart Prize and has appeared in publications across North America, including The Common, The Smart Set, Smithsonian Folkways, The Masters Review, and Maisonneuve. He lives in Portland, Oregon, and holds an MFA from the University of British Columbia. Visit him at willprestonwriter.wordpress.com.