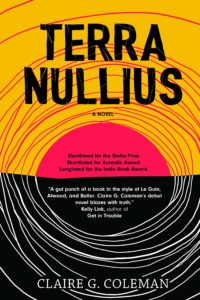 Terra Nullius is as much a gift to readers as a challenge to reviewers. A gift because Claire G. Coleman delivers a driving narrative of profound force. A challenge because describing this force demands spoiling a revelation that punctuates the story some one hundred pages in. Indeed, what is so fascinating about this book is the open question of whether this particular revelation changes everything about the story or changes nothing at all. It’s not a question I can address without giving away the twist. So, consider yourself alerted.

Set in the arid Australian outback, the first hundred pages depict a gripping if distinctly this-worldly conflict that resembles brutal expropriation as it exists and has existed in any number of places. This is a story about imperial domination. Strangers invade to decimate Indigenous people and the land. Hunger, fear, and desperation exist at the precariously free fringes of a colonial government that otherwise forces native persons into slave-like working conditions and assimilation by education. A cruel religious leader, Sister Bagra, abuses  children. A desperate runaway, Jacky, is pursued through the desert by soldiers and a particularly nasty commander named Rohan. A young woman, Esperance, struggles to hold together her crumbling community. And one of the colonizers, Johnny Star, defects from his fellow soldiers to join the conquered people in violent resistance. The story is difficult and raw but recognizable. While clearly wanting to focus on history specific to the continent “now called Australia,” as Coleman puts it in her “Acknowledgements” note, the book invites a certain universalizing consideration of the colonial machine. This universalization is indicated, for instance, by Coleman’s generic characterological distinction between “Settlers” and “Natives.”

But this book is marketed as speculative fiction; the cover blurb names Ursula K. Le Guin, Margaret Atwood, and Octavia Butler. Surely soon the science fictional shoe will drop — the technology will revolt, the monster will appear, right? When the shoe does drop it works to quiet but startling effect. The deft final pages of chapter nine inform us that the genre fiction — monsters included—has been here all along. This story of bloody abuse dried in the codes of civilizations past and present is also, for Coleman, a vision of the future. Here the invasion derives not from Europe but from the incursion of grey-skinned overloads, rulers from the stars no more alien to human beings than white settlers must have once seemed to any number of native peoples. The book’s dyadic distinction between Settler/Native speaks to a ubiquitous system of abuse, then, but also marks a strategic obfuscation for Coleman, who wants particular identities unspecified at least for a while. The dyad endures into this speculative future, but now all of humanity finds itself conquered. The dyad is thus universal in a literal sense — extending to describe inhumane treatment rife throughout the interplanetary universe itself.

The novel’s title indicts this inhumane treatment directly. “Terra Nullius” is Latin for “no man’s land.” The phrase refers to a legal distinction with ancient roots but ongoing consequences: land designated terra nullius is empty and open, ripe for the taking. This legalese justification motivated the shaping of modern Australia, and a similar legitimation by declaration of absence and erasure has spurred many other colonial projects. The “new world” of America, for instance, was declared a “wasteland” in need of the improving presence of European “settlers.” Here as in so much storytelling from Indigenous traditions, the land is shown not to have been empty even if, perhaps, it did not “belong” to anyone in an acquisitive sense. The long-standing fullness of the land in this novel is evidenced by the generational patterns of adaptation that the Natives (read: humans) depend on to survive in the desert landscape of their home. The grey invaders—referred to by human as “Toads” because of their amphibious yet humanoid physiology — do not fare as well given the scarcity of water. Indeed, many of the Toads throughout the story pine for their aqueous homeworld, which uses canals instead of roads. Despite the imperial domination vouchsafed by advanced weaponry, it is clear even to the often-embittered Toads that they do not belong in this world that they have claimed as property.

Coleman’s story refuses to sentimentalize the unremitting violence levied against the Natives. As Liz Bourke points out in her review for Tor, this book has no interest in providing an escapist fantasy or unlikely revolution, and as such it is not always easy to engage. For all the sympathy extended to the human protagonists and to Johnny Star, the Toad who joins them on the run, the book offers no balm. Coleman effectively situates their desperate struggle within the larger fictional universe by prefacing each chapter with quotes (sometimes whole pages) clipped from various “found” documents; all but one of the prefaces, Coleman says, are her creation. Together these prefaces drawn from bureaucratic records, proverbs, court testimonies, etc. give the sense that little is certain for characters which face such an entrenched and totalizing system. In the face of this reality, resistance together is everything, the only thing left.

But while eschewing comforting closure, the novel does offer a powerful demonstration that Indigenous traditions of storytelling contain ample resources for narrating deeply human dramas of endurance within the straits of apocalypse. Scholars like Grace Dillon and Kyle Powys Whyte have consistently argued that the term “apocalypse” is almost redundant in the case of Indigenous literature. Where much conventional science fiction — whether techno-determinist or cli fi—looks forward in time to imagine the destruction of the world as “we” know it, a similar destruction of the world is ingrained in the ongoing stories of Indigenous peoples. Put simply, Indigenous traditions do not have to imagine, do not have to craft a made-up future. What seems to many like the end of times is all too familiar for them. They have seen worlds destroyed — indeed, are still seeing worlds destroyed as the long shadow of colonialism vociferously eats away at cultural traditions and environmental surroundings.

With this profound truth in mind, it should come as no surprise that Coleman, an Australian Aboriginal author of the South Coast Noongar people, is particularly poised to enliven the tropes of the science fiction contact genre. After all, the South Coast Noongar people and other Indigenous groups have continuously been subject to violent interruption. Indeed, as author Drew Hayden Taylor points out, the contact story structures the past and the ongoing present for many Indigenous groups. For Coleman, as I’ve said, this story is also the future. This sense of continuity is what makes the twist one hundred pages into the novel both fascinating and — ultimately — inconsequential. Coleman’s point is to un-defamiliarize the genre — to render the normally defamiliarizing work of science fiction mundane within the Indigenous perspective of her telling. Her point, in other words, is to show us anew a situation that is not new but all too frequently unseen. We travel forward in time to understand a story that began centuries ago.

When We Cease to Understand the World – Benjamín Labatut