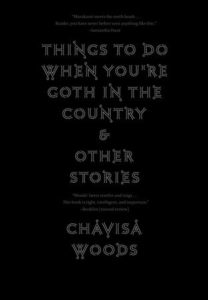 Were the eight stories that comprise Chavisa Woods’ collection Things to Do When You’re Goth in the Country & Other Stories to be mapped, they might best be visualized as a series of Venn diagrams. In the center of each would be a word referencing an artifact of the American south, while one “wing” would describe a common cultural narrative about that artifact and the other would be a metaphysical explanation for its existence. In the center of one, for example, we might have “guns.” In the left wing we might see “paranoid allegiance to the second amendment”; in the right, “a tool that is rendered useless, indeed forgotten, upon the arrival of glowing green orbs of mysterious origin in the backyard.” In another, “meth” might be the focal point of our diagram. In this case, the left side of our diagram might say something about the abject misery of poverty, barriers to healthcare and holistic treatment, and our tendency to consider addiction a personal moral failing; in the right, we might see analysis of the drug as both a cause and escape from existing as the walking dead. Of course, the things you consider phenomena, artifacts, and narratives both true and false would come to represent different parts of the diagram, depending on your vantage point.

“The country” has always held a dominant place in the stories that America tells about itself, imbued with popular understandings of national identity, character, and history. This is certainly no less true since the 2016 presidential election, as demonstrated by the seemingly endless retrospective attempts of befuddled city dwellers to understand the motivations of white rural Trump voters. But most of these analyses take for granted too many assumptions about who rural Americans are and what life is truly like in the country to offer much insight. It is apparent that, for too many authors of these sociological investigations, their subjects are a newly emerged population that they are considering seriously for the first time. The stories of Woods’ collection are somewhat fantastical and take place pre-president Trump, against the background of the Gulf War, the Clinton and Obama administrations, yet offer a more sympathetic, interesting, and downright wacky look at small town U.S.A., reminding us that weird America has been here all along.

Throughout these stories, Woods’ characters positions themselves as of the country, but also alien to it. It is where they are from as well as from where they have fled. They are compelled to return after swearing they never will because they were ostracized for being gay, or atheist, or simply because they look strange. Their experiences reflect a tension between dark, painful reality and the tenuous bonds that make it survivable. Her character’s perspectives, therefore, are simultaneously insightful, heartfelt, and often hilarious.

In the first story, “How to Stop Smoking in Nineteen Thousand Two Hundred and Eighty-Seven Seconds, Usama”, a New York City ex-pat reticently returns to rural Illinois, where she finds herself holed up in a trailer with her younger brother and his cousin who is hiding from the cops. She is surprised and initially horrified to find that she is invested in his evasion, though he is wanted for manslaughter (second degree) and rape (statutory) and she is “not the kind of lady who usually sides with convicted rapists wanted for manslaughter.” But these kids are victim to BS “Good Samaritan” laws and, after suggesting they call the ACLU (an organization they have never heard of), she berates herself for being “a stupid little faggot,” in “stupid little art-fag clothes . . . talking at them with my faggoty, self-educated voice, telling them my faggoty New York ideas. I’m such a queer faggot, I was even thinking about Michel Foucault.” But when the green glowing alien orbs that her brother and his cousin warn her are proliferating in the meadow cleared by meth cooks behind their trailer turn out to be real, and when the mucus in her chain smoker’s chest starts to develop a monstrous personality of its own, when she realizes “how much sad death, murder, and suicide” she’d seen there in comparison to New York and “how ironic that seemed,” the power dynamics between them start to shift.

In the particularly somber story “Zombie,” a young tomboy and her friend happen upon a figure in the cemetery late one night. Unsure at first if she is real or hallucination, dead or alive, they listen to a bevy of mixed-up stories that are meant to explain the marks of her abuse and her home within a tomb. They are old enough to know that this woman is a homeless, drug-addled prostitute and that she is sad, but young enough to get caught up in a fantasy that she is their friend, a cool older sister figure who buys them alcohol and shares their secrets. For them, she exists somewhere between their childhood and adolescence, their imaginations and their nightmares. In a way, she belongs to them. But the cemetery, that universal haunt of goth teens everywhere, cannot remain their place of peace and play when it ceases to be a place “where the dead left us alone.” The shortest story in the collection, “A Little Aside,” is narrated by a woman who exists in a similarly liminal state to the “zombie,” disenfranchised through lack of access to education, legal aid, and sexual violence. This liminal state is important because, as she puts it, “things have a way of showing you their true selves when they’re transitioning. Their true selves is there in the moment between, when they go into the space between, like how the moment between calm and anger, you see what a person really is; if they are a scared person, or a sad person, of just a hard motherfucker.” And there are beasts within us all.

But most of the stories maintain a healthy levity. In “Take the Way Home That Leads Back to Sullivan Street,” a college student drops acid at her rich girlfriend’s mother’s MENSA party, upending all popular definitions of genius. In “A New Mohawk”, perhaps the most imaginative and abstract of the bunch, a trans boi joins his crush at a rally in support of Palestinian liberation only to find the next day that a miniature replica of the Gaza Strip has grown up in place of his hair, tiny bombings and casualties and all. He becomes an unwitting spokesperson for the cause but, unfortunately, his love interest is more interested in what is on top of his head than what’s within his heart. Even the two stories narrated by women fearful of spiritual damnation hinge on a sense of humor that they do not feel themselves but the reader is privy too, so that as the little girl narrating “What’s Happening on the News?” cries while burning her troll dolls because CNN (the Christian News Network) says they are demonic, we laugh at the absurdity of the situation. While devoted churchgoer Sarah is frightened, in “Revelations,” to learn that many of her fellow worshippers distrust their priest and have started to follow their own heathen practice, we laugh as we sense her interest piqued through her disgust.

The final, and title, story is the only one which is perhaps too on the nose, at least thematically, but it’s here that Wood’s lyricism shines above her content. A literal description of what a queer goth teenager does to occupy themselves in the country, (smoke, cut, make “fucked-up Barbie doll-head necklaces . . . Vietnam ear tokens honoring the violence of girlishness” to freak out their neighbors) becomes a toe-tapping, tongue-wagging séance of its own. Echoing the very rhythm of a sermon while offering a how-to for political, cultural, and religious subversion, her prose bends, bleeds, and bulldozes. It’s here she really identifies the thing at the heart of southern Being and Not Being, of Belonging and Not Belonging. “If you are going to be Goth in the country and really go for it,” she writes, “I would highly recommend a nonconsensual, surprise Southern Baptist exorcism.” There are many devious behaviors that might achieve this end: “Satanism is so blasé and reactionary an endeavor” but “if you are not already a homosexual, you can easily become one,” which entails “that moment when your minister lays hands on you, and the faces of the congregation, people you thought you knew well, turn, doll-eyed and pitying, to begin praying some unknown demon out of you, their lips mouthing out whispering a of the same prayer in unison: that really is the pinnacle.” SO goth, in other words.

These stories exist in those in-between places, those sticky spaces that are neither completely real nor imagined. They are never judgmental, nor do they let those who inflict pain off the hook. They offer both a realistic view of the negative contradictions, isolation, and overwhelming boredom that is part of modern rural life as well as a creative way out of it. As the narrator explains in the first story, after all, it is more plausible that green orbs come from a combination of meth and toxic mold than UFO’s, but admits that it’s “a lot more fun” to think of them “as alien life-forms than all that other crap, especially if you’re living with them.” Through the contradictions and ambiguity of these stories, we catch a few real glimpses of what it must feel like, for some, to live in the country; and what a queer country it is.