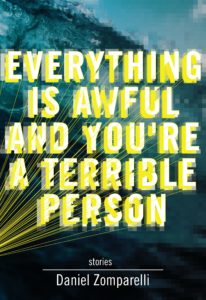 He walked into the lounge.

ThatDude would be in the back and wearing a fedora.

Ryan noticed that he looked nothing like his profile picture.

He quickly turned around and deleted ThatDude’s number.

The lines above appear in Daniel Zomparelli’s story “Date: ThatDude” as normal sentences, rather than verse, and together comprise the entirety of the short story from Zomparelli’s first fiction collection Everything is Awful and You’re a Terrible Person. Reading it over, and then over again, I felt compelled to break it into separate lines, to highlight the narrative arc and emphasize Ryan’s ephemeral interest. “For sale: baby shoes, never worn” this is not, but for Zomparelli, spareness as formal constraint is informed as much by Grindr as it is by Lydia Davis.

Throughout the collection, technology often mediates desire, updating the universal themes of love and loneliness for the gay man with a smart phone. “Date: Chillandlaidbackdude” begins with a typical exchange between two unnamed people: “What’s up?” and then, “Not much, just got back from the gym. :p”. It ends with an exchange even more typical: “[bentover.jpg]” followed by “You have unread messages from a user that you have blocked.” For the uninitiated, such an exchange might seem extremely coarse or pathetically shallow, but by the end of his vignettes, Zomparelli paints such interactions as commonplace. Sometimes, they are refreshingly droll, as with “Date: Notallican”:

“I promised myself that I would say yes to anyone who asked me on a date.”

“That’s a bit of a Russian roulette, no?”

“Has it been eventful?”

This kind of stilted interaction provides some relief to a collection that might have benefited from some excision. Even more satisfaction comes from the various instances of body horror that Zomparelli deploys, sometimes with uneven effect, to neatly tie together the strands of digital and physical intimacy that run through the stories. In “Craig Has Very Nice Skin,” the narrator attempts to have a night out at the bar, but is hindered by his human skin slipping off to reveal his wings and fur. However, what begins as a humorous story wrapped in kitsch treads quickly into an overwrought sentimentalism: “Maybe he would kiss me and hold me, tell me that skin was just a disgusting layer of flaking elastic bands covering beautiful flesh and fur. Maybe he would kiss my face, my chest, tell me that I was perfect with my flesh hanging out.” In “Date: Monster”, however, surrealism works to amplify the erotic: “Unwrapping him from head to toe, Ryan pressed his naked body against the cold fur. Steve’s wings unfurled and wrapped around Ryan’s body. They slipped to the floor, the skin a mattress protecting them.” Reading these stories, I wondered if Anne Carson’s Geryon would be any less sympathetic if he had a smartphone.

To the extent that such exchanges are recognizable to the point where a chuckle turns into vague discomfort, Zomparelli’s collection paints a fairly accurate life of urban, or urban-adjacent, cis-gay men, rife with real-life issues of alcoholism, depression, racism, and class confusion. Many of the longer stories in the collection include transcriptions of therapy sessions, or feature therapists as characters. “Therapist told me that my body dysmorphia is normal and common among gay men,” a character recounts. Later, nervously sitting in the home of a “not very attractive man” whose “profile used shadowing and was cropped in close to make him appear to be something else,” he sweats nervously but recalls, “Therapist made a joke once that my anxiety must be great for my skin.”

Feeling uncomfortable in your own body – or rather, being made to feel uncomfortable – might be the closest to what could be called a “universal” gay experience, if there is one at all (there isn’t). In the most poignant of his stories, Zomparelli illustrates how these feelings of discomfort have professional impacts. The narrator of “Progress” is unhappily waiting out his last few days of his contract in a nondescript office job, stealing stationery and failing to do his assignments. As a limp goodbye, he leaves Post-It notes on his co-workers computers, each with a hand-drawn frowning face. Immediately after, he and a coworker have a sexual encounter in the bathroom stall, and after finishing, the coworker informs him: “You know no one likes you here, right?” In “Nice Shorts, Bro”, Kevin’s social anxiety prevents him from informing the staff of the café he frequents that he’s lactose intolerant. As a result, he spends much of his time in the office writhing in pain in the bathroom, when he’s not busy interpreting casual comments from his coworkers as personal slights. Unable to assert himself in public, Kevin enacts his exact desires in the privacy of his bedroom, whose door he leaves open for anonymous men to enter. “What do you want me to do with these little blue shorts?” someone asks. “I need you to rip them off me.” If the opposite of discomfort can be read as happiness, something beyond the signifiers of frowning or smiling faces, these characters know that it’s out there.

When I began this review, I took the liberty of rearranging Zomparelli’s words to appear more like poetry, in an effort to imbue some of the more mundane or seemingly trivial aspects of gay life with the same gravity with which Zomparelli speaks of romance in verse. Take, for instance, his recollection of a past relationship: “i was showing you where my friends were getting married. and you/corrected me, said this was the hotel where we used to go for brunch. you/drove the car in the wrong direction.” Through poetry, the past brims with the potential for interpretation. The present, by contrast, is always slipping away in narrative. We reach out and try to hold onto the moments we think we’ll need to remember in the future, but how to determine what will matter is a near-Sisyphean task. This desire for narrative takes on a distinctly queer verve, as Edmund White (poetically) notes: “The most romantic moment with gay men — this is something Michel Foucault said, it’s not an original thought — he said the most romantic moment for a heterosexual man is the build-up to sex, and for gay men the most romantic moment is when you put your trick in a cab and you go back home alone thinking about it all.” If there is any occasion for poetry at all, why can’t it be found in a one-night stand?

I should mention now that Zomparelli is himself an accomplished and widely published poet, the founder and Editor-in-Chief of Poetry Is Magazine and whose first book of poems, Davie Street Translations is both heartbreaking and vivifying. Everything is Awful and You’re a Terrible Person is interspersed with arresting lines, such as in the opening of “Dream Boy”: “the house is filled with old, empty boxes. i wander around trying/ to find you again, but it’s just old empty boxes and the boxes pile up.”

It’s evident that Zomparelli works well with prosody, but it is in “Fake Boyfriend” where the thematic tropes of body horror, digital intimacy, and an ear for rhythm coalesce into something truly moving. The story introduces a series of men who have signed up for a web service called Fakeboyfriend.net (“Would you like a boyfriend who texts you all the time, and ONLY has time for you?”). Anthony, the gay equivalent to SmarterChild, is meant to only exist online but manages to visit his “clients” in stealth; the story recounts his interactions with Erik, Julian, Kevin, and Dave. Like the rest of Zomparelli’s stories, “Fake Boyfriend” reminds us of the discrepancy between IRL and URL, that desire might not map so cleanly onto the bodies we intimate ourselves with. Per Dave and Anthony:

Dave: I didn’t think that’s how this

Anthony: Well, it doesn’t. But I

just think maybe we have a real

Enjambment itself doesn’t make for real import, but here, desire pulls the mundane conversation toward a vision of happiness, toward something resembling what the characters really want. Desire, after all, is no light thing.

Tausif Noor is a freelance critic and contributing editor at Momus. His writing has appeared in Artforum, Art Asia Pacific, the Los Angeles Review of Books, and more. He lives in New York.