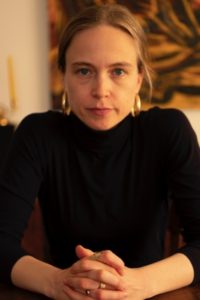 Kathryn Scanlan’s stories are written with a scalpel. Every word and punctuation mark is carefully considered, and at the end of each story one is left with the feeling that those words have carried them to a great height, though the the climb felt short. In short, the stories in The Dominant Animal perform linguistic magic. Scanlan and I emailed to discuss the craft sensibilities fueling these stories, as well as their potential aesthetic histories.

Kyle Williams: To start, I would like to ask about your process. The word “compression” comes up a lot—is that how you view it? From what are you compressing?

Kathryn Scanlan: Compression indicates pressure is being applied to create a reduction in volume, which I think is accurate to what’s happening in the stories. I apply pressure to what I’ve already written when editing, but I also apply pressure as I write, and before I begin to write, by continually saying no to my received ideas about language and narrative. The pressure built by saying no helps me find what I can say yes to. Excessive explanation and commentary are tendencies I’m always working against.

How much do you identify with a term like “minimalist”? As a description of what you’re doing, and what writers like Diane Williams and Lydia Davis have been doing, and as a sensibility shared among many of the stories published in NOON, it doesn’t seem to go far enough, or seems in other ways inaccurate. How would you characterize that sensibility? Are there writers who’ve had an influence crafting it in you?

In general I dislike any term that attempts to categorize writing or writers, because it’s always as you say—inaccurate, partial. Some traits I’ve seen attributed to minimalism are traits I admire in writing: concision, absence, restraint, close observation of the physical (often mundane) world, an authorial stance that allows space for the reader to participate. Diane Williams and Lydia Davis are very different writers (and I’ve been hugely influenced by both) but I think the traits above might be applicable to them. Fundamentally what they share—what the stories in NOON share—is an intensity of focus on the possibility and opportunity of language.

In an article you wrote on your last book, Aug 9—Fog, you write that “connecting with one’s original speech is central to the ability to write fiction.” What is “one’s original speech”? Do you mean this in a sense like voice, or something more metaphysical? (Both?)

I’m suspicious of pronouncements about writing fiction and am irritated with myself for making this one, but I think what I was trying to say has something to do with voice and the metaphysical both, and is probably more personal than that quote indicates. I don’t believe in a fixed idea of the self—I feel my personality to be continually in flux, and my writing regularly borrows from and is influenced by the speech, stories, notions, and personalities of other people—but I think there might be a vein of speech one can tap into that comes from listening to your mother in the womb, from your earliest encounters with language, and reconnecting with that particular syntax and vocabulary can be invigorating when writing fiction (in my experience).

I am always paying attention to sound. Because writing is speech, and speech originates in the body, in the throat, in the mouth, I think a writer’s attention to sound might better enable her speech to travel from her body onto the page and into the body of her reader. When I read the work of writers who do this, my response is visceral—my pulse accelerates, my stomach lifts, I have to stand up and walk around or curse.

There are a lot of animals in these stories. There are a lot of pet dogs, as well as cats, but also horses, coyotes, cows. I hope I am not making too much of this, but I feel there’s something to it. What keeps you coming back to these animal presences?

I’ve spent a large part of my life in silent communication and companionship with animals. I love to watch animals, what they do, how they live—it gives me deep joy and a sense of proximity to mystery. I’m troubled by the supremacy with which humans, who are animals, tend to view animals—and I think it’s related to the supremacy with which some humans view other humans.

“Violent” might be a central characterization of many of the relationships in this book, and is signaled by its title. But violence, dominance, and abuse come across in many different ways. There is, for instance, the line in “The Rescued Man”: “Violence became necessary, said the fisherman. To save the man, he beat him on the head.” What, then, is violence?

In that passage, a man has decided to end his life, and another man decides he won’t allow it. One definition of violence, then, might be the physical imposition of one’s will on another—this happens in a few of the stories. But I’m curious how you define it, because I don’t consider it to be a central characterization of many of the relationships in this book, and I don’t necessarily equate dominance with violence as you suggest.

I defer often to Judith Butler, who writes in Precarious Life, “violence is, always, an exploitation of that primary tie, that primary way in which we are, as bodies, outside ourselves and for one another.” Dominance is part of it, and in Butler’s own formulations political and systemic violence often has that element, but it’s difficult for me to reconcile. For instance, as in “The Rescued Man,” is suicide not violent? Butler’s formulation requires bodies, plural, so I wonder. Is the imposition of one’s will on oneself not also violence?

Maybe another definition of violence could be the simple condition of having a body, then—violence does not exist without a body for it to be enacted upon. I think a lot of the stories in the collection come from a kind of terror or horror of having a body, of being vulnerable to violence.

The way you pace your stories is extremely interesting. I cannot call many of your stories “plotless,” but “plots” are often done away with in a few words, so the rest of the words can do something else—I am thinking here of half a sentence in “The Hungry Valley”: “After his children left and before his wife found a large, hard lump in her thigh . . .” Your pacing often creates these stark cuts that jump time past a few crucial seconds to entire years. What is plot for?

I like your phrasing—“plots” are often done away with in a few words, so the rest of the words can do something else—and I think it accurately describes my inclination. I find it exciting to undermine narrative expectation. A thrilling sense of freedom comes from the realization that as a writer you are the god of your story—you can make whatever leaps and elisions you want. I think stories come closest to their alchemical potential when a writer is actively testing the limits of plot.

The story “Fable” made me think about whether your stories are fables—not like Aesop’s, but like Kafka’s. Do you view your stories this way?

Using “Fable” as the title of that story is a way of invoking the form, of twisting and subverting it. A fable is typically a vehicle for a moral lesson, which is the opposite of what I want fiction to do—but someone like Kafka is also playing with and against the form. Refutation and reinterpretation of forms, genres, conventions—of anything that feels like a constraint or an expectation or a demand—is a continually invigorating activity.

My last question is concerned mostly with “Mother’s Teeth,” which is a story that really stuck with me when I read it in NOON, and which sticks with me still in its new context. In it, many things happen, most of them quite bad, violent, and scarring, but its ending leaves the narrator in circumstances “which—in my understanding, [are] the best possible outcome for this story.” This is an impossible question, but, for you, What is a story?

In my mind a story is infinitely flexible and elastic, capable of holding or being anything and everything. It’s a platform, an empty stage. A story is whatever I say it is. I occasionally have the misfortune of hearing someone declare that a piece of writing presented by a writer as a story is not actually a story. To me this always sounds like a declaration (and litigation) of what god likes and doesn’t like. I get a similar feeling when I hear stories emphatically, repetitively, obsessively described as ‘brief’ ‘fleeting’ ‘short’ ‘very short’ ‘micro’ ‘flash’ ‘strange’ ‘weird’ ‘unusual’ and ‘quirky’ because in it I hear a belief in a standard, universally agreed-upon length and subject matter and narrative style for a story, and a belief that any deviation from that standard is outside the norm, is other. Like most arguments for normalcy, for standardization, it favors a few and excludes most, and promotes the reduction and constriction of art. To me the story form is expansive, mutable—and stories are as variable as the people who write them.