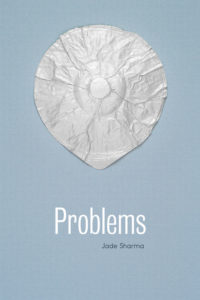 Before a solution can be pursued, a problem has to be acknowledged, and acknowledging a problem puts one at risk for being blamed for it. In an atmosphere like that, a debut novel like Jade Sharma’s Problems comes as an uneasy relief. It seems so clear in 2016 that there are problems, but acknowledging them, even with their solutions suspended in a stubbornly unreachable future, is still vital — and maddening. And Sharma knows it: “Behind every crazy woman,” she writes, “is a man sitting very quietly, saying, ‘What? I’m not doing anything.’”

Problems is the first book published by Emily Books’ new imprint on Coffee House Press. Emily Books subscribers hoping to discover a book like the kind Emily Gould and Ruth Curry have brought to light over the last half a decade will be in for a profound, visceral, and totally appropriate surprise: Problems is just as immersive and risky a place to develop compassion and love for characters as they live the way they want, injuring themselves with no interest in redemption. Like Adrienne Eisen’s Making Scenes, Tamara Faith Berger’s Maidenhead, and Heather Lewis’ Notice, Problems is hypnotic and dank, an intimate gurgle from a person to whom you have become so endeared you decode it. And you know it’s beautiful.

Problems lowers the reader into the atmosphere of Maya, whose identities as a new, young wife and masters student have curdled and shrunk as heroin use becomes the thing that fills her days. Maya is so alienated by the things people do because they feel they should and the things they will put up with to be polite — and she considers both motivations to be the only reason anybody engages with her. “Everybody likes it when you tell a joke and fake a smile because they can see you’re at least trying,” Maya observes. “And that’s the main thing: to be trying.” Maya does not try because she wants to smile for real, but nobody tells her a real joke. There are no good jokes in this world where Maya says, “The whole world wants young white girls.”

But Maya tries to shoulder the blame for why this world wants young white girls and not her. It is easier for her to accept that it is her fault she is not white and slim and still a girl (still a liability). It is not the world’s fault for not wanting her. She tries to internalize that she is the problem and stays out of the world’s way, holed up in her house, doing drugs.

Maya’s failure to “try” and the subsequent end of her marriage makes up the most mesmerizing part of the book. The story sees Maya, who starts out by concluding, “Somewhere along the way, there stopped being new days,” as she compares her husband Peter, who she has mainstreamed until he is reduced to a blond smear, with Ogden, the professor from her masters program who she had been fucking, but whose interest in her had waned since he could no longer feel that fucking her came free of consequences. Maya feels faced with the “choice” of Peter or Ogden, despite the fact that she is married to the one and the other has shed his affiliation with her. The passivity with which she can approach this choice makes it a safe place to toil. Her passivity is complicated by the real Thanksgiving vacation to Peter’s parents’ house where she has to try, where she has to not get high, where she tells herself, “This was not forever. This was like a job. A bad shift at a bad job.”

Maya reckons with Peter’s family, a stone cold average group of non-New Yorkers whose worlds look furiously small to Maya and whose interactions with one another are conscribed by social rules that confound Maya with their tedium, particularly since she is bound up in her own rules for herself — specifically, she cannot just tell them what is on her mind because she cannot keep her rage from infiltrating her interactions. She cannot acknowledge problems, and she cannot make herself unaware of their multitudes.

“You look so cold,” she said. Her body was perfect. Her smile showed ultrawhite teeth. She was a ray of sunshine. I was doom and gloom and could hardly muster a smile. I wanted her to like me. I hated her instantly.

“Yeah, I’m kind of cold.” I was still wearing my coat. I kept waiting for the warmth to hit me after I came in, but there was no heat.

“Oh, sorry about that,” Sandy said.

All of Maya’s assessments are so sober but her logic, the idea that she knows what’s going on when she doesn’t have a lot of social currency, makes her want to check out of the whole thing. Coffee House Press advertises that Problems takes on the trope of, among other things, “likeable” characters. How is one supposed to be likable when they acknowledge that problems exist and they need fixing, when one has internalized that one is a problem to be solved? Sharma gives readers the chance to dwell in the confrontational hailstorm that is Maya’s inner life, the thoughts she thinks that she can’t allow to escape her, in which she inadvertently reveals to herself what her problems really are. It doesn’t matter what they are. It matters that they are legible to her.

I chain-smoked in a thin black slip and slippers. I was content in my bubble. Nothing in this bubble could hurt me, if you didn’t count me. Life was going to be awesome and awful, beautiful and ugly. The most exciting things that were going to happen to me would not be anywhere near Crate & Barrel. They would be in bars and streets and dark places. I would wake up in bright places and laugh at sad things and cry over dumb things. I would never get married again. I would never get stuck.

Maya has no metabolism for pretense, and it is hard to get by in this world without it. Likability is only on the table for characters whose presence does not expose the fraud, dysfunction, and potential for violence around them. A room with Maya in it is a room where racism and misogyny exists, because she carries them with her everywhere, she engages with them and wears their effects. She is forced to get by on demonstrating her ability to relax people, and Sharma wrings every exhausting drop out of her electric descriptions of emotional labor:

Imagine a world where people didn’t have hang-ups. Where I could have gone to a job interview, and said, “I’ve been hooking up with men for money, but I think I want to try working here now.” Where I could talk about it with people the same way other people talked about their jobs. It wasn’t fair I had to have these secrets when I didn’t feel like I was doing anything secretive.

Ultimately, after she burrows into a blur of Craigslist hookups in order to focus more on her heroin use, Maya spends time in an institution where, in that microcosm, she is able to gain some perspective. When a nurse tells her, “You’re refusing to comply with the rules,” Maya responds, “No. Jesus, I’m just trying to figure out what the point is.” Why try when she is not really the problem, not her non-maleness, her non-whiteness, her non-slimness — but feeling like she is, like there is a solution and it is drugs, that this is the only way to endure when the problem is patriarchy and white supremacy, so unfathomably big that they seem easier to try and work within them than challenge them.

“And I think about those women on Facebook,” says Maya, “who are always posting pictures of themselves with husbands or children, and I think how for so long, that’s what I had wanted. But anyone can find others to hide behind. Being alone, figuring out how to make the hours go, satiating your own wrestling human heart, means you never have to hide or be numb again.” It is easy to roil in the problems you should have, i.e. that you don’t have the life you should want, than to determine who you are and what you want on your own terms. The real problems might feel insurmountable, but this directive — do not be numb — that pulsates throughout Problems establishes Jade Sharma’s work (may there be much more on the way) as a powerful, pitiless, razor-sharp ally that readers can take with them as they move through this fucked up world.