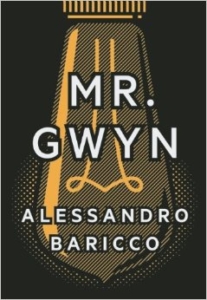 The solitary act of reading often makes universal statements seem overwhelmingly directed toward the reader. At the center of most reading experiences, there’s a longing for those exalted, so-called transcendental moments when it seems the author has somehow leapt off the page and penetrated us; it’s those juvenile, romantic “it’s as though they were speaking to me” moments that often determine the reverence with which a book is treated by its reader. These bursts of true-false connection are the cherished, if hokey, souvenirs of reading. Alessandro Baricco’s awe-inspiring double-novella Mr. Gwyn, translated by Ann Goldstein and just released by McSweeney’s, is all about these moments — about the idea of a text truly “getting you” — but it also opens up the question of whether there’s a “you” to get.

After announcing in The Guardian that he’ll no longer be writing novels, venerated British author Jasper Gwyn clandestinely takes to creating “written portraits” — four-page documents that capture the essence of a person with such eerie precision that they’ll pay tens of thousands of pounds for one. The process of creating these texts is rigidly structured: Jasper Gwyn has enlisted a light-bulb-maker to fabricate bulbs that extinguish themselves one by one, as his 30-day observations of his clients comes to a close. He plays noise music while observing. He gives his clients a key to his studio — a room with a bed and the suicidal bulbs — and instructs them to come for exactly four hours a day, every day. He requires them to be nude, to “move everything beyond a certain limit,” otherwise “without that uncomfortable dislocation . . . no field would open up, no infinite prospect.”

All of these atmospheric additives might lead the reader — and surely lead some clients — to question the authenticity of the process. Is Mr. Gwyn getting at something essential (and is the essential truly something to aim for?), or is he using mystical flourishes to disguise a vacuous act? Like most forms of doctrinal spirituality, the complex fortresses built for their practice provide more of a sense of wonder than their intangible and untapped promises. Does God exist, or is that flying buttress simply too stunning? Did Reiki just heal my UTI, or was I merely overtaken by Yanni’s passion on the didgeridoo?

Baricco’s writing, while always elusive, manages to likewise be fun: it seems as though the Italian writer chose to set his book in England for the purposes of subtle Agatha Christification. Baricco’s language thrives (here through Ann Goldstein’s graceful translation) in this light application of archetypal British mystery to an otherwise Kafkaesque narrative. As for the “portraits,” which are the novella’s biggest mystery, Baricco remains deliberately vague (for a while, we know so little, Jasper Gwyn’s “written portraiture” could be as literal and goofy as calligrams in the shapes of his clients). The result of Baricco’s game of omission, depending on how willingly you fall under Baricco’s/Gwyn’s spell, could be seen either as an overweight but undefined metaphor, or an eerie suggestion of the ineffable power of words. I, personally, fell quite hard under said spell, but I see how the feeling of being conned could cross Gwyn’s patrons’ — as well as Baricco’s readers’ — minds. Baricco, too, is well aware of this, and at one point, towards the end of the novella, Jasper Gwyn is briefly suspected of plagiarizing his portraits; here, Baricco lets us know he might share our skepticism, and it’s something of a relief.

Gwyn’s shtick resembles that of a certain Marina Abramović (it falls somewhere between her MoMA retrospective and the artworks of, say, a “Your name on a grain of rice!” street vendor); here, the artist is present, the subject is present, everyone is present, and at the end of the four weeks of portrait-making, those presences are inscribed on four pages of text that might question the very nature of presence. For Mr. Gwyn also ambiguously places itself between the semiotic tenets of existentialism and structuralism/post-structuralism: while these portraits suggest a humanist ideal of autonomous selfhood, how could a written portrait not represent a decentered subject, a linguistically tyrannized entity that cannot exist without context? Does Gwyn’s written portraiture solidify notions of implacable selfhood, or a lack thereof? Luckily, Baricco never gets so academic in his writing — the focus of his crisp, unfussy prose is rather Gwyn’s elaborate process, whose results merely give rise to this unending array of questions.

Even more than with most literary sex scenes, reading Baricco’s straightforward account of Gwyn’s process, his ritual of heightened intimacy — which, strangely, is also one of reserve and solitude — feels like an encroachment on something very delicate. Gwyn’s trial run — for which he uses his soon-to-be assistant Rebecca, with whom he’s also somewhat in love — is an especially tense read. Just as you’d tiptoe or whisper your way through that old cathedral with the aforementioned flying buttresses that bolstered your belief in a higher power, so here are we caught in a hushed fixation on what’s occurring between these individuals. We question if Gwyn’s only able to achieve this intimacy because of his more organic feelings for Rebecca, but it turns out he’s just as successful at getting to peoples’ cores in his subsequent undertakings. We’re therefore awestruck by the fragility of the connection Gwyn creates with his subjects, but know that it’s so brittle because of the painstaking efforts he took to make it so; these transcendental moments are quite premeditated.

Three Times at Dawn, the novella following Mr. Gwyn, is inextricably linked to it, but we’ll never quite know how. The details of this uncertain inextricability cannot be revealed here, as they would give away one of the key philosophical “twists” of Mr. Gwyn, but let’s just say that the novella is something of a “power of suggestion” scavenger hunt. Three Times at Dawn is composed of three vignettes, starting with two characters that meet in a hotel lobby at four in the morning; the following two vignettes elaborate on bleak but formative moments of both of their adolescences (each centering around a connection with a stranger in a hotel room). The quotation mark-less dialogue and spare description give the stories and their characters a disembodied quality — they are somber, floating suggestions. And yet the author manages a strange character building alchemy that turns them into people in spite of this. In the last vignette, for example, a boy tells a policewoman who’s benevolently “kidnapped” him the story of watching his parents burn alive; the sparseness throughout Three Times renders this passage unbearably vivid by comparison: “my mother was like a torch,” says the boy, “she caught fire at a certain point, but even then she didn’t start running away, she stood there like a torch.” Baricco builds a startling magnetism between characters in these three duets, and their collisions ultimately result in revelatory full-bodiedness.

By the end, we wonder how these are not, themselves, written portraits. Or might they be? The bizarreness of the concept of a “written portrait” might, it turns out, be its very normalcy. Since Mr. Gwyn is followed by this fragmented — but otherwise conventional — series of narratives, we puzzle over the difference between this and what Jasper Gwyn is attempting. What piece of literature isn’t a written portrait, regardless of whether it’s of a fictitious character or a real one? And if it’s just a semantic reframing, how did such a simple gesture of rewording make this very basic thing sound so outlandish?

The wraith-like quality of Baricco’s novellas connotes a vague notion of spirituality — perhaps a strategically bogus notion, perhaps not — beneath the act of writing character. Baricco ensures that we see the authorial machinations that create this gorgeous ghostliness — both on Gwyn’s and Baricco’s parts — as Baricco ponders the genesis of faith, selfhood, and literature, considers the fallibility of each, and quietly celebrates all.