The Whole of Life – Jürg Laederach 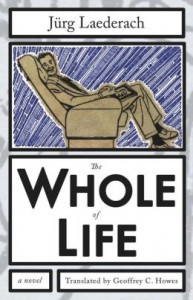 [Dalkey Archive; 2014]
It’s hard to believe, but once upon a time Trent Reznor’s music wasn’t immediately associated with hopeless, charming nihilism. In a 1992 interview with Chaos Magazine, Reznor expressed his frustration over fans who were “turned off” by the abrasive sound of his second major release, Broken. “It may be pretentious,” he said, “but I wanted to make a record that the first time you hear it you don’t like it, but you might want to hear it again.” As an artist who with each subsequent release alienated a new set of fans, Reznor fulfilled his aspirations. Even as a total fanboy, I briefly turned against him after 2005’s With Teeth — an album I wouldn’t appreciate until much later. When I first heard it, it wasn’t the album I’d wanted him to write.

A few years ago, one of my writing mentors introduced this idea via “difficult reading.” What are the books, she wanted to know, that resist you? I’d battled the first few chapters of Moby-Dick for years until, one day, I sat down and enjoyed the novel’s every word. It wasn’t until my third time through Beloved that I didn’t hate it. Some books, she said, do what they can to fight you off. Often, these are the books we come to love most. At least I’ve learned, by now, that just because I can’t finish a book doesn’t mean I should throw it out. Sometimes it’s the reader who’s not holding up his end of the bargain.

To be honest, had I not volunteered to review Jürg Laederach’s recently-translated 1978 novel, The Whole of Life, it would’ve gone right back on my bookshelf. In his preface, translator Geoffrey C. Howes tries to warn the reader of what’s coming: “Laederach knows that language is only as reliable and stable as the minds that use it; in other words, it is unreliable and unstable.” Never before have I spent so long reading and re-reading a novel’s first page, trying to make sense of it. Already, I’d been tricked.

The Whole of Life is not one character’s Dickensian romp, nor a chorus of several interlocked lives meant to simulate any reality. It’s not even a chronological life. Instead, Laederach divides the novel into a “trilogy” of thematic elements. The first, “Job,” is a phantasmagoria of professions held by Bob Hecht, Bob, R. Hecht, Robert, Hecht Bob, That Hecht, and myriad other forms of the same idea of a man. Whether as a lounge pianist, a gardener, an ambiguous executive, or a counter of arc lamps along a highway (because, his boss admits, “Until now we’ve never known just how many arc lamps there are in this damned country”), Hecht is both victim and perpetrator in his own kafkaesque hell of financial desperation. A typical passage reads something like this: “The next dose of pension comes punctually. Stinking drunk, he opens the door to the enforcement officer. He’s mislaid his name and thinks he’s the first of the month in person. Scribbles an X on the receipt and stamps it with an imprint of his mouth next to that. This is interpreted in the office as a kiss, and they say nice things about him behind his crooked back.” At 133 pages, “Job” is just as absurd, incoherent, and terrifying as an actual job. As a reader, you can only hang on and take care of yourself.

The second section, “Wife,” gives us Hecht living in a country house with his young wife, furiously planting a garden as he battles a yearlong bout of impotence. Though a mere 15 pages, Laederach’s “Wife” is the only consistent, uninterrupted narrative in the novel, and is a welcome relief after its predecessor’s schizophrenia. That’s not to say that it’s easy to follow. Sexual impotence and inadequacy aren’t exactly wanting in metaphors, and it’s hard, so to speak, to know when to call a “huge, stiff firewood log pointing slantwise at the chimney” for the stove fuel that it is.

Fortunately, in the book’s third section, “Totems and Taboos” — though it returns to a fractured and circular, sometimes psychotic, narrative — Laederach mercifully forgoes the multiple Bobs and Hechts and “the bouillon cube(s) Robert” for a consistent “I,” whose voice, throughout these final meditative pages, we at least believe we can trust. Deriving its name from Freud’s 1913 collection of anthropological/psychoanalytic essays, “Totems and Taboos” pits Robert the beast against Robert the writer, who may have written the previous 156 pages — it’s hard to be sure. In fact it’s uncertainty itself that seems to haunt Hecht, and by extension Laederach. But if it’s uncertainty that haunts him it’s uncertainty he’s mastered. “Let’s believe half of everything,” he proposes. “I presume it means something indefinite, and emphatically so.”

Somehow, in these final pages, Laederach achieves an emotional undertow, and all of the novel’s frustrating incoherence — its hostile instability — work beautifully. “Laederach’s language breaks up and breaks down,” Howes tells us in his preface. “It repeats itself like music does, and it teases us into the idea that if language is to account for human perception, thought, and emotion, it has to leave behind the received realm of conventional facts and how they are made.” In The Whole of Life, there are no facts, and it’s possible, Laederach seems to say, that the same is true for the whole of life itself.

Incidentally, in that statement, Howes introduces another way to view this novel. The Whole of Life does repeat itself, and it does start to seem like music. Its structure, too, mirrors that of a romantic symphony: “Job” as allegro; “Wife” — with its slow, concentrated narrative — a brief adagio; and “Totems” as a return to manic allegro. All three recycle the same themes of power and powerlessness, first the struggle against unemployment, second impotence, and third — with his homegrown “writing business” — creative incompetence (or, for lack of a better term, writer’s block). Laederach’s befuddling prose may simply be musical notation; his surrealist anecdotes may be nothing more than trills and key changes that, like music, elicit unexpected, unexplained emotions you didn’t know you were carrying around inside of you.

Of course I know nothing of music theory. Perhaps this is only how I want to read The Whole of Life. Perhaps the idea of a novel at work in the unexplored parts of my head is more alluring than a trilogy of writer’s block. Perhaps Hecht’s mentioning a Romantic composer — “‘I love Schubert,’ I said without prompting” — is only a coincidence, a name caught in his overflow of information; and perhaps his interlocutor’s response — “‘Composing instead of writing,’ Hirsch confirmed — is equally coincidental. How are you supposed to be certain? Again, even Hecht dodges this: “I don’t know what ‘to be certain’ means. It might not mean anything. But that’s not so certain. . . . Perhaps it means that it has crossed someone’s mind, without one’s knowing him or ever having heard of him, a mind that he himself does not know.”

In the end, Hecht can only know one thing: “that he has once again written something down.” In the technical sense, that’s all The Whole of Life is — a thing written down. The same is true for Moby-Dick or Madame Bovary. Or The Cat in the Hat, for that matter. The most recent issue of People. A pamphlet that tells you what bus to take, or at least what bus you should’ve taken at the time the pamphlet was printed. All Laederach has done, maybe, is taken the short cut. He’s shown how much of ourselves we bring to what’s written down, and how much of a mirror a text really is. Here are some words, he says. All you have to do is show up, baggage in tow.