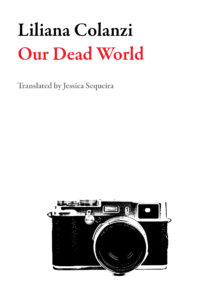 For a time, while living in New York in my twenties, Carl Jung’s Flying Saucers: A Modern Myth of Things Seen in the Skies was consistent livre de chevet. The symbolic value that Jung assigned UFO’s in his relatively straightforward historical record of mysterious things seen in the sky held a complicated double significance for me. Weekends as a child spent camping at Table Rock Lake in Missouri, a place marked by urban legend as a notorious hotbed of UFO activity, primed me to take pleasure in fantasizing about the terrible sublimity of the potential of intelligent alien life. It was a heady combination of beauty and fear, contemplated while trembling inside a flashlight-illuminated tent.

EYE: “Loss of the eye or loss of sight can lead to something healing or creative, to the opening of clairvoyance, to the ‘third eye’ of ‘inner sight,’ transpersonal awareness,” writes Bruce Marshall in The Human Body: The Eye, Window to the World. But in Lilana Colanzi’s story “The Eye,” in which a young woman emotionally abused by her religious mother a la Carrie forces herself to vomit an eyeball into a toilet, the new vision the eye portends seems anything but a gift. “She used her fingers to spit up a bitter liquid that burned her throat, but relief was some time in coming. From the toilet bowl, emerging in the middle of a bubble of vomit, she saw it appear. The Eye. It was missing an eyelid, but in the dark blue iris the girl recognizes the gaze – mocking? threatening? – of her mother. The Eye – was it possible? – smiled.” She thinks The Eye is an omen for something, or a signal. Perhaps for the end of the world. Later on she almost has a sexual encounter with a boy in a movie theater that is instead interrupted by a spiritual awakening. She has opened herself up to the enemy and finally understands her purpose, which is mixed up with a homegrown eschatology: “The Eye had disappeared, and in her bones the girl could feel the crackle of the first balls of fire setting off towards Earth. She had begun.”

A second and more immediate meaning for an almost devotional reading of the book came from my having recently returned from military service, which included two deployments to Iraq. Jung argues that what the historical phenomenon of UFO sightings portend is an act of cosmic synchronicity. People see saucers, or flying golden discs, or “chariots of the gods” when there’s some kind of vast, incomprehensible harmony between inner and outer states. A sign of synchronicity. Simultaneously, Jung wrote, they also symbolize the collective advancement through a liminal state and into a new world. He took the modern infatuation with UFOs as a symptom of our moving together into the Age of Aquarius (his words, not mine). And so for a year or so Jung’s little book on UFOs sat on my nightstand, the odd and optimistic symbol of my own passage into what I hoped would be a brand new world of civilian identity. A personal jubilee in which a radical rebalancing of force and energy would be achieved.

METEORITE: Colanzi’s story “Meteorite” is about a flabby, diet-pill addicted rancher who is confronted by the strange energies of both alien life and his peasant workers. A comet portends the strange events — which include spectral invaders and death —- at the beginning, as it did for the three wise men, Julius Caesar, the Norman invasion, and Montezuma. “The meteoroid traced the same orbit in the solar system for fifteen million years until the movement of a comet pushed it towards Earth. Even so, it took another twenty thousand more years before it collided with this planet, during which time the world passed through an ice age, mountains shifted and the waves gave landmasses a new shape. Innumerable life forms died out forever, while others battled ferociously, adapted, and repopulated Earth. When the object at least entered the atmosphere, the pressure of the shock reduced it to an explosion of flaming fragments that were consumed before they hit the ground.” And then a boy dies after a cow kicks him. Or aliens abduct him.

Lilana Colanzi’s collection of short stories, Our Dead World, lucidly translated from Spanish by Jessica Sequiera, sunk me deeply back into the more primal fears of my younger self, half awake and dreaming in the fire light, where UFOs weren’t odd gestures of a grand symbolic unity, but simply mysterious invaders from the unknown. The oldest dynamic of any invasion played out simultaneously in registers both majestic banal: the one where the mystery that the invaders bring renders you mysterious to yourself.

WAVE: The Rig Veda relates the mystery of waves to the question of a prime mover:

There was neither non-existence nor existence

Then; there was neither the realm of space nor

The sky which is beyond. What stirred? Where?

In whose protection? Was there water, bottomless deep?

The wave is emblematic of movement itself. In “The Wave,” the annual wave of suicides on campus corresponds with a young writer’s return home overseas. On the way home, a cab driver tells her an amazing story that both reaffirms and recontextualizes her metaphysical ache: “There, beneath the golden light, was the house of my childhood. The clouds peeling away in tatters. The long journey. The old Dream. The Wave suspended over the horizon, at the beginning and ending of all things, waiting. My worn-out heart, shivering, trembling with love.”

Colanzi’s work moves in the opposite direction of Jung’s in every way, both stylistically and in meaning. Instead of incorporating fringe events — maybe called miracles in other contexts — into a unified theory of the symbolic nature of human consciousness, Colanzi’s work disintegrates our faith in the existence of a coherent reality itself. Colanzi works in horror, and that’s exactly what horror is supposed to do. It acts as a rejoinder to the Apollonian faith in our role as curators of a universe that naturally replicates a cogent order. Horror shows us this order infiltrated and broken down, the cosmic balance out of sync, and the total inability of the intellect to pierce the decay of meaning. In this sense, horror is a metaphysical humility.

CASKET: Not just a casket, but a child’s casket. Penny Colman tells us that before boxes were used to bury the dead, bodies were just wrapped in cloth or animal skins. Sometimes nothing at all. The casket is supposed to be something more permanent, a cross between a vessel and an abode. Built for mysterious movement inside of a cold permanence. “Alfredito” is the strongest story in this collection. Children learn about death not through the passing of an adult, who is a stranger anyways, but through the death of one of their own. A school friend. Anyone who had a friend die as a child understands the way that the presence and absence of the departed blend to create a third energy. The funeral scene in “Alfredito” is a triumph of mystical rhetoric that crescendos in a Catholic satori: “At that moment, the neon cross above us twinkled with the intensity of a diamond. The hall, people, coffins, flowers, our own astonished bodies, everything levitated in a single iridescent shaft of light. It was like our lives departed from us a moment to rise in shining vision, which left us inundated and overflowing.”

So Colanzi’s stories work within a genre that resists intellectual systemization, but her powers aren’t bound up within the genre alone. Many writers use the clichés of their genre like training wheels, making up for a lack of individual talent by leaning heavily on commonly recurring characteristics: the cowboy slinks away to another plateau after saving the day, the child accepts the supernatural threat long before the adults, human political constructs are mirrored in those of extraterrestrial cultures. Half of genre fiction writes itself. So maybe in Colanzi’s case it’s more accurate to say that she’s a writer of literature who works in a horror idiom. And though she has all the markings of being able to fit snugly within au courant political categories (she’s a young Bolivian woman currently living in the United States who writes from that perspective) her power as an artist derives from something deeper than either her identity or medium. Or maybe it’s better to say that both are subsumed by her talent and transformed. Her real genius doesn’t derive from either of these things, but more from the Keatsian negative capability to unweave the anodyne and assemble its spent threads in a disturbing pile, perhaps still half-recognizable from childhood.