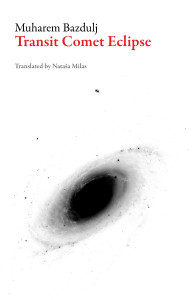 “I was just thinking of X when I saw him in the street,” “I dreamed of a flood in country Y, and the next day saw it in the papers,” “I was just wondering what happened to Z, then the telephone rang”: coincidence can come in many forms, and persist in seeming important even when statistical information should convince us otherwise. Birthdates are a classic case. One can become hyperaware of those with shared birthdays; in school it is common to discover a secret resemblance with other classmates who share our D.O.B, not to mention celebrities. Astrology is also rooted in the remarkable nature of coincidence, and likewise attracts us with its mélange of playfulness, pseudoscience and ego flattery.

In the three linked novellas of Transit Comet Eclipse, Muharem Bazdulj bases his material on coincidental findings. Bazdulj was born in 1977 and is one of the leading writers to emerge from the Balkans after the disintegration of Yugoslavia; he now lives in Belgrade after fifteen years in Sarajevo. His essays and short stories have appeared in twenty languages, including two previous translations into English, The Second Book and Byron and the Beauty. Transit Comet Eclipse is similarly wide-ranging in its material. The first part recounts the travel of 18th-century Jesuit astronomer Ruđer Bošković through eastern Europe to see the transit of Venus in Petrograd; the second part is about a contemporary Moldovan girl at the end of the 20th century who tries to flee west with a boyfriend, but is sold into the sex trade and kills herself; the third part tells how the Writer came to compose the previous two stories, and explains his ideas about coincidence.

Coincidence, the remarkable concurrence of two events or circumstances unified by what amounts to a situational pun, can be seen as an illumination of divine structure or a connection to the chain of being; it can also be used as a procedure for writing. As Bazdulj puts it: “It’s all connected, it’s all one, all is harmony; the chances and coincidences are signs of this harmony. That is what one ought to write about, thought the Writer, but not high-strung and pathetic, no crudeness or cheap cynicism. It should be done the way Auster does it: naturally and in an old-fashioned way. One ought to tell a story, realized the Writer, one’s own story but not the story of oneself.”

The “Auster” reference is not gratuitous. Bazdulj is a fan of Paul Auster, and this book is essentially a rewriting of the New York Trilogy and Moon Palace in Balkan key. Bazdulj’s act of naked homage to a western writer outstrips in intensity what many US fans would feel capable, and is reminiscent of the enthusiastic homages to rock stars in eastern Europe, more intense than those of their US counterparts. Bazdulj writes of Auster’s work with reverence, and he reads and rereads it. When he comes across a passage tucked into the middle of Moon Palace about Nikola Tesla, he is inspired to write a book with a part that focuses on Yugoslav astronomer Ruđer Bošković. The Writer was born in Dubrovnik. So was Bošković, as the Writer learns when he is shown a newspaper clipping in 7th grade; not only that, the two share a birthday. A similar logic continues in the second story in the book, which twists unexpectedly after the Writer spends a day accompanying a journalist, and after “coincientally” coming to know about certain goings-on at a Lašva Valley night club, decides to write this despair into the second story.

There is a curious morbidity to the stories. In the first tale, as the priest passes through Jassy, he describes it as a “city of wood”: “Like a city from a fairy tale, thought Bošković, remembering stories he had heard in childhood, as if it were a city on a ship floating on the sea.” Yet at the end of the story he dies, spitting up blood. Correspondingly, although the anodyne story of a girl named Maria Alexandra begins as a fairy tale spiced with incursions into smoking and flirtations with a mysterious local boy, it swiftly turns dark, and this tale also ends in blood. Here the preordained quality of coincidence also applies to life; it is as if Bazdulj is reminding us that things must be this way, that only one end is possible.

The human brain is wired to recognize coincidence, and it is a phenomenon that affects everyone. What makes Bazdulj’s particular coincidences worth reading? Unlike famous admirers of coincidence like Carl Jung and Arthur Koestler, Bazdulj does not have any theory of synchronicity or occult meaning to offer readers. The “harmony” he mentions is not religious or spiritual. Although they are the focus of a third of his book, Bazdulj even expresses a distaste for the subject of Jesuits. He quotes Ivo Andrić — a Nobel Prize winning writer and clear influence on Bazdulj; his epigraph appears before each of the three sections — in his description of the priests: “Peculiar people. They have a way about them by which they express their politeness that is somewhat disgusting.”

As we come to learn, the meaning of coincidence for Bazjulj is whatever links back to his self, as a key that gives meaning to the reality of one’s own life. Everything acquires meaning because it is linked to the Writer, from the rambling journal entries of the traveling Jesuit in the first part, to the horrifying descent of a kitsch love story into sordid epiphany in the second, to the Writer’s mandala-like thoughts in the third. Is this mere egoism? Perhaps one would prefer the first two sections without the final exposé, the magician’s “reveal” that both destabilizes and makes banal what has come before, as it introduces a self-centred Writer with open doubts about the purpose of literature: “The autumn melancholy was now intensified by his literary resignation. I know how to write, thought the Writer, I know what to write, but I don’t know why to write.” This might seem like navel-gazing, especially when the Writer describes a pointless trip to the Atlantic port of Saint-Nazaire for a literary festival, where he gets sick and complains about everything.

Two possible nuances, however, open up other more interesting readings. The first is that Bazdulj and the astronomer Bošković do not really share a birthday; the dates are separated by one day. So this is a “forced” coincidence, and suggests more agency and literary craftsmanship than Bazdulj states explicitly. Perhaps there is a game of masks here, in which the Writer is fascinated by the idea of coincidence but also knows that to wait for destiny is not enough. The second nuance is that Bazdulj comes from an area with a very complicated political past. After Bosnia and Herzegovina declared independence from Yugoslavia, Sarajevo was under siege for three years. Bazdulj’s own move away from his birthplace drives him to introspection; in some sense, the search for meaning in coincidence is a search to escape loneliness and make sense of events. It’s no surprise that all of Bazdulj’s characters are solitary figures, and that Bazdulj’s travels into psychology are also excursions into the recent past of Yugoslavian history.

That the coincidences are forced, however, leads one to question even further the ethical consequences of these texts, especially the second in which a girl kills herself. The novel does not have to kill her, and while it is true that the author was ‘coincidentally’ introduced to the sex trade while writing, the abrupt and violent death occurs because the Writer wants to surprise the reader — because he wants her to die. Is this move self-gratifying? Are these characters mere wood for the burning furnance of an Auster-enamored author? Or is Bazdulj attempting to demonstrate that another kind of determinism exists alongside coincidence — namely, death and the cruelty of fate — and that it exists, furthermore, in fiction? In any case, the results are disturbing.

The publisher of this English translation, Dalkey Archive, focuses particularly on books that are self-conscious about the process of writing, laying bare the pre-textual steps that go into making a novel. Bazdulj has been brave enough to admit the provenance of his own process in a way that does not make him seem glamorous or original, but rather indebted to the procedure of coincidence on the one hand and the structural influence of Paul Auster on the other. Bazdulj takes apart the classic three-act structure of literature, with its organization of introduction, central conflict and resolution, without making his text read like a wandering conversation in a bar; in this Transit Comet Eclipse makes for a tight and interesting read (translated by Natasa Milas). If it does seem too obviously autobiographical at times, using coincidence to make constellations out of the stars of history, at least Bazdulj has the audacity to extend his telescope further than do most writers. He seeks to capture not only his own journey to writing, but also the journeys of an 18th c. priest making his way through lands unknown to him, and a sentimental girl for whom things go terribly wrong. Perhaps the question is whether Bazdulj’s telescope is the kind that works by curved mirrors, so that all others are mere extensions of his “I,” reflected light.