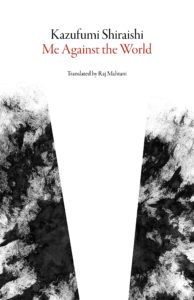 When my grandparents were not dead, I would go alone to see them, usually for lunch. Not often because I lived far away, but when I visited my parents I liked the midday, midweek drive to my grandparents’ Orange County subdivision while the world was at work. Having only the three of us felt novel partly because we had no recourse to the set roles and scripts that otherwise constitute family drama. We could speak freely. My grandfather could speak freely. For example, the time he looked intently at me over an egg salad sandwich: “They say you can make a difference, that everything is filled with meaning. They are lying. Life means nothing.” Hearing that, it was like relief. The pronouncement was surprising, even for him. He was more or less known for being a curmudgeon, partly why we got along so well. Also, we both liked poetry and egg salad sandwiches, both of which go largely underappreciated in my family.

Kazufumi Shiraishi’s misanthropic Me Against the World begins there, in the subdivision, at the condo’s beige kitchen table, or wherever you associate the most predictable interactions with the most predictable people in your life. The character Mr. K (Mr. Kazufumi? Mr. Kashyap? Does it matter?) whose journal we are supposedly reading, after a staid life filled with un-objectionably fulfilling his obligations, then begins to articulate something other.

You see I don’t love my children, nor do I love my wife.

Their existence is meaningless to me.

An existential thrill sets in, one I don’t remember feeling since, say, The Stranger or Nausea, both guiding lights during my late teens. The book then proceeds with a homespun philosophical interrogation of/tirade against death and the idea of it for about a hundred pages. The philosopher will say, that’s it? What can you get done in a hundred pages chasing after such a perennial? The fiction reader: Do I have to wade through all one hundred? I’ll say it outright. You can get a lot done and you should wade through all of them.

There is real pleasure in the way Mr. K makes his way through his line of reasoning, in the shape of his thoughts. The explanatory tropes he uses and the weirdly curated thought exercises and facts culled from popular media, funneled through the curious divagations of his thinking, these give depth to the character and energy to the prose. We get paranormal reality TV and Enola Gay. We get the “enormous drawing paper measuring ten meters in height and twenty meters in width” on which the self is but an ink stain. Even though not longer after the drawing paper gets scrapped — actually “We are like the paper patterns tailors use.” Or how, in another extended metaphor, those who advocate for “a great force for good” are merely God’s spies on the battlefield, no different from any spies deployed by any imperial power.

And if we are to follow his train of thought, where does Mr. K lead us? While not particularly rigorous in approach (that is not the point) nor particularly new in scope, there are little gems that feel fresh, excavated by the process. Cancer is suicidal, we learn. Ghosts are only capable of uninteresting platitudes. That by “carrying out mutual destruction . . . we are made to perceive and appreciate the true pleasures of life.” Not the least of these surprises is the volta towards the end. The reader having been drawn through the wringer of a peculiar kind of negative theology, arrives at a stance of equanimity and compassion, but a skeptic’s stance, one highly specific and personal.

“I saw myself in Camus’ The Stranger,” quotes translator Raj Mahtani from an interview with Kazufumi in his postscript. The little novel was apparently an early and magnetic influence during the author’s charmingly literary childhood cloistered on account of chronic respiratory issues. No surprise given the clear if superficial congruencies between Existentialism and certain strains of Japanese lit. For a certain set, what’s better? You get moral permission to inhabit the voice of a first-person asshole poised to wipe the bourgeois smirk off the reader’s face by way of the unvarnished truth, the really real. Even if that voice must be a male’s and of a certain privilege.

But this is not that exactly. Kazufumi is working against the backdrop of another terrible global political morass, equally all-consuming and equally likely to debilitate with apathy, but with a different texture. The current toxic media environment and rainbow hues of terror alerts are pervasive and pernicious in ways unlike the specter of out and out world wars. Second, the method is hybrid. While Mr. K is more or less doing atheistic philosophy, he doesn’t give up on the Buddhism of contemporary Japanese culture in which he is steeped. Lastly, he let’s himself get somewhere. There might be some shortcutting, but that doesn’t entirely undermine the moment of arrival.

In the introduction, the fictional journalist responsible for getting Mr. K’s notes published justifies his decision: “I thought it would be a good idea to personally hand over this collection of notes to those around twenty years old.” And it’s true; of the multiple ways to take this work, it’s hard to shake the reading in which there’s an unwritten subtitle, something like Letters to a Young Curmudgeon. The younger me would have been enthralled. He would not have noticed so much the spots where the terrain felt well trod or where the path skirted solipsistic onanism. But there’s more than enough thrill in the premise and delight in the execution to find you the whole way through. You walk away with a hard won sliver of compassion for Mr. K and continued gratitude to Dalkey for making acclaimed contemporary voices like Kazufumi available to a broader audience before they’re totally dead.