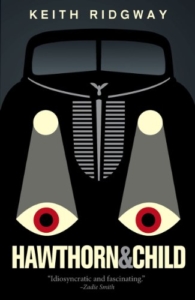 In its way, Keith Ridgway’s Hawthorn and Child is a compelling read. Some readers expecting a conventionally linear narrative might certainly find that this book consistently defies expectations of sequential continuity and character development, but this does not mean it provides no story (it may provide too much) and no characters (there might be too many to keep track of). If we were to abandon the notion that plots must be unilinear and that the reader’s relationship to the plot must be mediated by “well-rounded” characters, one of whom serves as a protagonist with whom we may “identify,” we might perhaps come to appreciate the different kind of structure and more dispersed focus on multiple characters Ridgway employs in Hawthorn and Child.

The reader puzzled by this strategy might usefully regard it as the explicit reversal of the conventional expectations of what a novel will offer us. The effect is heightened by the fact that the book is initially presented to us as a crime novel or detective novel, a genre that especially relies on the kind of story that progresses, that answers the questions it implicitly poses. The first chapter of Hawthorn and Child introduces us to the title characters, a pair of London detectives, who are on a case in which a man has been shot but doesn’t really know where the shot came from, although he believes it was fired from a “vintage car.” Hawthorn begins to investigate, looking further into the victim’s background and attempting to identify the car, leaving us the impression as the chapter closes that this investigation (as well as Hawthorn’s state of mind, which, it is suggested, might be precarious) will be the focus of the novel.

As it turns out, however, we learn nothing more about this case. Hawthorn and Child themselves fade from view in subsequent chapters, appearing only as secondary or peripheral characters in episodes featuring new characters from the north London area where Hawthorn and Child work. These include a pickpocket turned driver for a local gangster, who eventually must run for his life when he fears the gangster has discovered he has become a police informant; a possibly psychopathic book editor in possession of a strange manuscript; an art-loving young girl (who also happens to be the daughter of Hawthorn and Child’s boss); a paranoiac who believes he suffers from an infection transmitted to him by Tony Blair; and a religious lunatic on the loose. Hawthorn and Child return in the final chapter, investigating a woman’s death that may or may not be a suicide.

Readers accustomed to the usual progression of the detective novel would understandably be disconcerted by a book that first seems to promise the pleasures offered by a crime story plot but then so thoroughly withholds those pleasures. But surely Ridgway wants such readers to be disconcerted, to reconsider what they require of fiction beyond the repeated iterations of this sort of plot. Even so, however, Hawthorn and Child fulfills many of the goals traditionally assumed by crime fiction. As in many crime novels, Hawthorn and Child conveys a strong sense of place, the questionable activities and behavior it depicts arising from local circumstances, while also allowing a perspective on the local setting that a focus on more conventional behavior would not provide. If the book does not feature a clearly delineated protagonist and antagonist, we are initially encouraged to take Hawthorn as the protagonist, and many of the other characters make a vivid enough impression on us as well. And while ultimately this novel does not focus on one particular “crime” carried through to its solution, it is still possible to regard the interlocked episodes as forming a crime narrative of sorts, at least if we allow that such a narrative is as much a mode of representation as it is a specific kind of plot.

Crime narratives work to portray the reality that is in a sense masked by “ordinary” reality, a reality where deviation from norms is the norm, a reality that reveals the disorder lurking beneath the thin veneer of order society attempts to apply in order to ignore it. If usually the plot’s resolution seems to restore a fragile order, the threat to its preservation remains, ready to take a slightly different form in the next story. Hawthorn and Child certainly offers us a perspective on this parallel reality, even though it doesn’t do so through the expected plot devices. There are criminals and other shady characters, but the focus on other sorts of marginal people collectively evokes the milieu that in this part of north London sustains the parallel reality, nourishing the problematic behaviors that arise from it. Hawthorn and Child don’t “uncover” the circumstances behind any one transgression of public order and civic peace, but the novel itself uncovers the ultimately illusory nature of such order and the always provisional status of that peace.

Furthermore, it is possible to read Hawthorn and Child not as a novel (as which it has nevertheless generally been described), but as a collection of stories with a common setting and with the title figures as recurring characters but not necessarily the exclusive focus of interest. This would mitigate our need for linear development, while the book would still provide the depiction of the urban underside I have described. Although the book’s first story would also still have tricked us into expecting a fully developed crime story with Hawthorn as the somewhat unstable protagonist, knowing that the ensuing chapters are meant to be read as formally discreet works that do reverberate nicely with each other but are not otherwise continuous would surely ease our frustration with its apparent lack of continuity. Yet to view the book this way is finally only to underscore that Hawthorn and Child is a fundamentally conventional work of fiction, with arguably the imposed tension between reading it as a novel and reading it a series of short stories the sole adventurous feature. And that the book in fact could be successfully read in both ways doesn’t so much mark it as original or innovative as indicate the extent to which it manages to incorporate enough of the familiar, in-common elements of both the novel and the short story to be accessible as either.

A few of the “chapters” would no doubt work less well than others if considered as stand-alone stories. “How to Have Fun With a Fat Man” focuses on Hawthorn, although it alternates between a memory from Hawthorn’s early days as a police officer when he was part of police line during a demonstration, a get-together with the rest of the Hawthorn family, and Hawthorn’s participation in group sex at a gay sauna. This piece mostly contributes to the portrayal of Hawthorn, giving us further insight into the troubled state of mind in which we find him in the opening chapter. Thus it gives support to the conclusion that this book ought to be judged as a novel, Hawthorne its unheroic hero. Ridgway does not depict his protagonist as a “gay detective,” although he is clearly enough struggling with his sense of himself as both. His sexuality seems just another unexpected twist on the conventions of the detective novel.

Hawthorn and Child is probably best appreciated as an extended twist on the detective novel, one with enough twists to maintain the reader’s curiosity and written crisply enough to move dubious readers past their doubts. Overturning or manipulating genre conventions is by now a rather familiar tactic, however, and I don’t think the book transforms this tactic into something sufficiently fresh that it fully escapes the specific genre conventions it parodies. It succeeds as an unorthodox version of a crime novel, but its interest doesn’t go much beyond that.