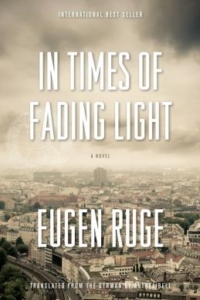 Eugen Ruge’s debut novel In Times of Fading Light has generated an enthusiastic response for what many critics perceive as the author’s admirable skill in building a historically fascinating puzzle. The pieces of the puzzle, a series of vignettes chronicling three generations of the Umitzer family over more than fifty years of modern history, document the way the Umitzers’ geopolitical circumstances shape their personal experiences. Certain charismatic people easily remember the names of new acquaintances post-introduction. If the aforementioned gift does not define you, however, Ruge’s critically acclaimed novel will most likely pose quite a challenge.

As I have a rather average ability to remember the names of new people, and possibly an average brain overall, I cannot help but address what a structural mindfuck In Times Of Fading Light is. The books introduces readers to a diverse family, the members of which express varying views on socialism during a transitional period in modern German history. Similar to an overcrowded social gathering where one is forced to meet many people on a superficial level, the book offers little insight into the motivations, incentives, and desires of its characters. Although Ruge claims to have based the characters on his actual family members, the motivations of the characters seem caricatured, lacking in emotional depth. There is only one character a reader can empathize with in the novel, the mother figure named Irina who gradually kills herself, succumbing to the great Eastern European tradition of alcoholism.

The complexity of the novel’s timeline also works against Ruge’s apparent aim to construct a narrative history of Germany. The book is dissected in random chronological fragments, starting the first chapter in the year 2001, moving on to 1952 in the second chapter, then transitioning to 1989 for the third chapter, and so on. The sparse timeline of numerous narrative plots, which are eventually concatenated to form a family mosaic, makes it more difficult for the author to delve in depth for the time periods in which the events took place. The only time-frame presented almost adequately is 1989–1991, yet even this section calls for much more depth. These two years mark the move from the centrally-planned economy of the German Democratic Republic (GDR) towards the decentralized open-market prowess of contemporary Germany. But readers interested in how such a radical transition took place, as well as in the resulting socio-cultural circumstances, will need to look elsewhere.

The book comprises a peculiar hybrid of the so very trendy “ambiguously-meta” dichotomy between fiction and nonfiction: it is marketed as a novel, but Ruge affirms its autobiographical nature. Ruge does not hesitate to state that he “waited” for his ancestors to pass prior to publishing his autobiographical novel, and he alleges that following their deaths, he acquired a “distance” that enabled him to construct an accurate, politically unbiased portrayal of the GDR. The writer’s audacity is clear in his claim of creating an “objective” novel of heroes and heroines who are no longer able to verify said objectivity.

Ultimately, the many exhausting details of Eugen’s prose never coalesce to justify the reader’s efforts; the book never really lives up to its promise of constructing a narrative from the many personal vignettes.