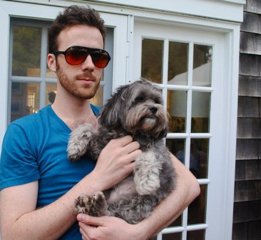 Miles Klee is the author of Ivyland, which is a finalist in this year’s Tournament of Books. He writes for BlackBook and The Awl and lots of other places.

Most directly it has limited my access to health insurance. Few employers feel the need for a full-time, 9-to-5, benefits-and-all writer when they can squeeze repeated freelance work out of the same body. Applying for jobs in any specialized niche of the media/publishing world, you get the sense that interviewers hear an alarm bell when there’s novel on the résumé. They bring it up as if to ask whether I really want a career or just a cubicle in which to daydream.

Writing requires no budget and no collaborators, sure. But I’ve always understood it more as a pastime of the idle, antisocial bourgeois(e). Flaubert, who can spend entire nights mastering his syllables. Then there’s the working class: Trollope scribbling at dawn before his shift in the civil bureaucracy. At the bottom rung, Dostoevsky trying to cover gambling debts. Good work materializes under all economic conditions, so you might as well be wealthy.

You’re crazy if you don’t want to see other people succeed in your field: it’s proof that you may do the same. I am envious of the relatively large advances and relatively extreme demand for non-fiction, though fiction’s relative unpopularity is not without its charms. Sometimes I am envious of especially loud and kickass rock bands, just because they have visceral instantaneity going for them.

None whatsoever. This is the entire problem.

Each time I enter a short story contest it is on the assumption I will easily win. I never ordinarily send out fiction with that confidence, but I guess it’s required to get past the $15 submission fees. Anyway, I can’t place higher than second. A story that became a chapter in Ivyland was a runner-up in a contest judged by Amy Hempel — I would have despaired at greater length had my friend not taken the top prize.

People tear up, they cry. It’s too bad, because usually I want them to laugh. Friends have been a bit shocked — this goes back to the Nietzsche question — because the work appears to contradict my identity, or painfully expose it. As for me, while writing, I have the emotional range of a lizard. Once I hesitated before killing a character that didn’t deserve it, but he had to go. Nothing personal.