Metawritings: Notes Toward a Theory of Nonfiction – Jill Talbot 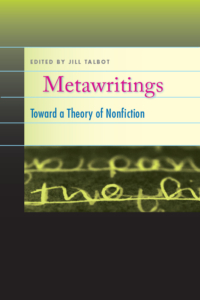 “This is so meta” has at this point become a punch line both within and against the mainstream “hipster” community. The prefix carries with it the baggage of characterization, and to employ it is to appear the educated overthinker and overanalyzer playing out a need to incorporate terms you became familiar with during one of your less career-intensive liberal arts classes. So it would be no surprise if, solely based on the book’s title, many would-be readers rolled their eyes uncontrollably.

Certainly, Jill Talbot’s Metawritings: Toward a Theory of Nonfiction treads that line. The selection of essays includes some that are quirky and provocative, but also some trying a tad too hard to be quirky and provocative. But it is also undoubtedly very timely in its appraisal of the importance of an “objective truth” in nonfiction, a preoccupation which connects the collection’s pieces to one other and to the broader cultural situation in which we find ourselves. In our time of vast  accessibility to information, people seek facts more than ever; they do not want to consume lies, especially lies that are presented as facts. If Oprah doesn’t like James Frey, why should anyone else? Not too long ago, John D’Agata and Jim Fingal’s Lifespan of a Fact became the catalyst for an extensive debate over the importance — or unimportance — of fact-checking nonfiction. The book presented the discourse between an almost condescending writer of literary nonfiction who considered himself a creator (D’Agata) and a fact-checker trying to eliminate too-creative liberties (Fingal). A myriad of articles were written to defend each side, but consensus was not reached. Readers’ curiosity in regard to the validity of writing alleged to be nonfiction is certainly not a new development. What has changed is contemporary hyperconnectivity: with “the facebook” and “the twitter” readers can  access unlimited information on writers’ lives, if the writers allow it.

It would be easy to take an extreme stance asserting the selection was either terrific or horrendous. The objective truth is that it includes fine paradigms of both.  Ryan Van Meter’s “I Was There” focuses on a thorough investigation of Janis Joplin’s exact address and its proximity to Van Meter’s home and falls under the terrific category. Brian Oliu’s “Adventure Island,” an essay based on an eight-bit Nintendo game, was also impressive. On the other side of this terrific-horrendous division: Ander Monson’s pompous “Facing the Monolith” which is presented like a performance piece on paper. It is possible that an abstract theoretical element might have been missed, but it is to be expected that many other readers will also not “get it.” Pop-culture-heavyweight Lena Dunham is also featured, and while her screenplay “Creative Nonfiction” might be a radical, life-changing feminist milestone, it might also be a saga of utter self-involvement in a privileged setting, which — by the way — does not cater to the need for characters of a diverse racial background.

It becomes hard to decipher to what degree Metawritings was crafted to make the reader wonder what is fact and what is fiction, triggering the “is-it-true”-curiosity that serves as the connecting theme for all the narratives. Fortunately, Talbot manages to emanate this ambivalence without making it a farcical drollery. The book is undoubtedly well-structured: it provides an interview segment with the story’s writer following each story and essay. The interviews in the collection enable an additional layer of understanding of the pieces from the authors’ standpoint, along with a description of their creative process and their views on the state of nonfiction. Interpreting every story separately on a personal level seems most appropriate for the reader to appreciate this collection. While the book’s quality depends on the attitude of the reader towards cultural references and academic inside jokes, it is of a buoyant level, with the author interviews serving as a feature that sometimes emulates the stories themselves.