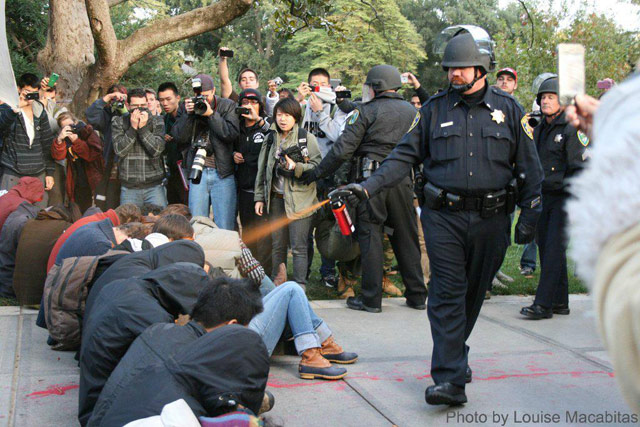 There are 758 words in the statement released Saturday by the Chancellor of UC Davis. The Chancellor, Linda Katehi, is the one who ordered campus police to disrupt the tents at the campus’s “Occupy” protest. The many videos of what happened after those orders sicken the stomach.

One of the words not included in this statement: “sorry.” Another phrase that does not appear: “I apologize.” Another: “It was wrong.”

Two of these protestors were hospitalized, and one was still coughing up blood forty-five minutes after the pepper spray.

These are kids who were barely aware of the latent violence ready to burst out into their protest. One video of the events, for instance, shows one of the students laughing at the absurdity of a policeman’s threats–because these threats were absurd, for the circumstances–only to be pepper-sprayed in the face two minutes later.

Who cares if their protests’ goals are right or misguided, whether you’re in the 99% or the 53%. James Fallows calls this a Bull Connor moment.

Chancellor Katehi should take responsibility for what happened. As an assistant UCD professor wrote to her,

You are responsible for it because this is what happens when UC Chancellors order police onto our campuses to disperse peaceful protesters through the use of force: students get hurt. Faculty get hurt.

Afterwards, Katehi and the campus police chief refused to even remotely take responsibility for what happened. According to Gawker,

UCD Police Chief Annette Spicuzza told the Davis Enterprise that she’s “very proud” of her officers. “I don’t believe any of our officers were hurt,” she says, “and I hope none of the students were injured.”

“The students had encircled the officers,” [Police Chief Spicuzza] said. “They needed to exit. They were looking to leave but were unable to get out.”

Sadly, this kind of overreach happens every day, by a very small but not negligible number of people. As Ta-Nehisi Coates reminds us,

Not to diminish what happened at UC Davis, but it’s worth considering what happens in poor neighborhoods and prisons, far from the cameras.

Since Katehi will not say the one word she must say, UCD students have left her in eerie, stunning silence, protesting her with a silent vigil that shows all of the discipline and moral force that she and one of her policemen lack.

Lucas Brown is the Director of Content at Sense and Sustainability, where this article was first posted. It appears here with permission from the author. You can read the original article here. Photo: Louise Macabitas, via SFist.