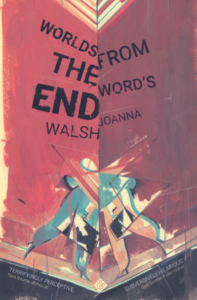 In her 2015 New York Times review of Joanna Walsh’s Vertigo, Heidi Julavits complained that the stories in the book “do not cut downward or inward, instead they move laterally until the energy simply dissipates.” On the one hand, this seems to signal an impatience with the stories’ resistance to the perceived need of psychological depth (“downward and inward”), reinforced by Julavits’s further charge that Walsh’s prose is “like a series of rocks expertly skipped across a body of water that maintains its surface tension,” but it also reinforces what is clearly a broader intolerance on the reviewer’s part of Walsh’s more unorthodox and adventurous narrative practices: “When does the reader feel vaguely ashamed for wanting more guidance” from the author?” Julavits asks near the beginning of her review, which pairs Vertigo with Walsh’s previous nonfiction book, Hotel. “Walsh’s formally restless approach,” Julavits avers, eventually “begins to seem less an inventive way to convey her story (and her mind) and more a fashionable evasion tactic — one that is intimidating and disorienting, so that common desires for sense, order, or the accrual of meaning are deemed moot, even foolish.”

While Julavits’s lament is a common enough expression of protest against formally or stylistically adventurous fiction, usually such full-throated objections are reserved for more grandly ambitious, conspicuously “experimental” works, not the kind of slender volume comprised of foreshortened stories offered by Joanna Walsh, which now include her new collection of stories, Worlds from the Word’s End. Julavits further charges Walsh with an emotional aridity: her books have “no platform for intimacy,” and her narrators use their discourse “to keep emotion at bay.” (Only one story in Vertigo manages to evade “Walsh’s emotional laws” of non-expression.) Is Joanna Walsh’s departure from accustomed practice judged to be even more unacceptable because she is a woman writer? If she must approach her subject — which to some extent could be described in terms that suggests a concern with women’s experiences and circumstances — from an oblique angle and a less expressly “intimate” style, should she not at least provide the sort of emotional resonance we might expect? To be sure, many reviewers of both Hotel and Vertigo responded much more favorably to these books, registering their ambiguities, their stylistic brittleness, and their distancing effects precisely as strengths of Walsh’s writing, not as manifestations of authorial bad faith.

Still, the sort of reaction exemplified by Julavits’s takedown in the New York Times Book Review remains as an illustration of the dissatisfaction that continues to be expressed among the keepers of common knowledge in the entrenched literary class with the questioning of that knowledge by writers apparently indifferent to it — perhaps in particular women writers who stray too far from the consensus about how a woman’s perspective ought to be represented in a work of fiction. One mode of anti-realist fiction has become favored by some more adventurous writers, what could be categorized as “fabulation,” of either the surrealist variety popularized by a writer like Aimee Bender, or the magic realist variety practiced by Kelly Link, and this mode has mostly received the endorsement of the literary establishment — at least insofar as these writers have achieved a significant degree of success, and other writers adopting that strategy continue to appear. However, although some of Walsh’s fictions might be characterized as reveries or fantasies of a sort, most of them nominally stay within the realm of a loosely conceived realism. Walsh’s challenges to expectation and convention can be seen more clearly in her fiction’s general avoidance of direct narrative. Even when narrative is ostensibly present, she offers an elliptical structure in which what is not disclosed is emphasized, and a prose style that abstains from the familiar sort of figurative language — “fine writing” — found in most mainstream literary fiction, instead frequently relying on devices such as repetition or the deliberate use of clichés.

To an extent, these strategies work to provide a kind of structural and tonal unity in Vertigo, as they reinforce the book’s perspective: all of the stories are narrated by a character who is unnamed but clearly enough the source of the experiences related throughout the book. The narrator largely observes and reflects, frequently alluding to her marital difficulties and attempting to come to terms with her feelings for her husband (from whom she eventually becomes estranged) and adapt to the conditions of a marriage’s dissolution. One could say that she finds herself in a perpetual state of vertigo under the circumstances she confronts, although in the particular story with that title the narrator indeed suffers from the physical symptoms of vertigo. This story is otherwise quite representative of the stories to be found in Vertigo, as well as some of those in Worlds from the Word’s End. The narrator is on holiday — a common setting in the book — in this case with her family. The story is highly fragmented, presenting the narrator’s brief observations of the activity around her, tinged with the awareness of her husband’s infidelities, at other times pursuing her observations into direct meditation on her circumstances or falling into a kind of internal dialogue. Near the end of the story, the point of view begins to alternate between the first-person and the third-person, as if her subjective processing has experienced overload and she must escape the confines of the internal perspective to gain more clarity.

But this escape from emotion, the attempt to impose distance on those emotions, a distance on herself through the disposition of language, is precisely what Heidi Julavits perceived as the weakness of Walsh’s writing. In a story like “Vertigo,” however, the delineation of this state of self-alienation is surely one of the writer’s goals. To admonish her for actually accomplishing this goal seems an odd critical judgment, to say the least. In Walsh’s stories, the reader is asked not to passively receive the account her narrators provide, not to “identify” with characters in the superficial sense we usually give the term in reflecting on the experience of reading fiction, but to inhabit the characters’ experience ourselves. By thus requiring us to occupy the narrator’s perspective, the stories paradoxically bring us closer to the character than a more conventional style or more casual treatment of point of view would be able to do. Clearly some readers resist assuming the perspective of characters whose response to their condition is an ambiguous mixture of stoicism and icily suppressed rage, who perhaps at times convey the impression that their doubts and disappointments are the opportunity to invoke and order language in unusual ways rather than to grapple with them openly. But while such readers may find themselves impatient with or judgmental of the behavior and attitudes of Walsh’s narrators — especially considered as a kind of composite narrator likely incorporating the author’s own experiences — this is an objection to the kind of character portrayed, not to the truthfulness of the portrayal.

Worlds from the Word’s End, unlike Vertigo, is not focused so exclusively on stories featuring a narrator we might directly connect to the author in this way. It is more formally varied, and could be called more recognizably experimental. Stories such as “Femme Maison” and the title story to an extent return us to the context explored in Vertigo — the dissolution of a long-term relationship — but each of them extend the subject beyond the still essentially realistic premise underlying its treatment in Vertigo. The former concerns the efforts of its female protagonist to adjust to living in her home alone, but, in a move that simultaneously imposes greater distance between author and character even as it elicits identification between character and reader, the story is related in the second-person. “Worlds from the Word’s End” begins in a familiar situation — a man and a woman with “communication” problems — but in this case the failure to communicate becomes part of a worldwide phenomenon in which communication more generally goes “out of fashion” and then disappears entirely.

Other stories depart from the paradigmatic approach of Vertigo altogether, introducing different sorts of characters and telling different kinds of stories, seemingly more purely invented. In the book’s first story, “Two,” an unnamed woman stands on the side of a road, offering two items to passersby. These items are never identified — they variously seem to be children, animals, and inanimate objects. “Travelling Light” tracks the progress of a “shipment,” the contents of which are never identified, in the form of a report by its shipping agent. Both of these stories seem to offer the possibility of allegorical meaning, but finally they appeal more as parodies of allegorical narratives, their “meaning” deliberately obscured. In the book’s final story, “Hauptbahnhof,” a woman has apparently taken up residence in a German train station and describes her activities waiting for a “you” who “may be in Edinburgh” but otherwise remains elusive. In stories such as these, Walsh relies more heavily on continuous narrative than in Vertigo, but still underscores what is not revealed, what acquires meaning only when unspoken. These narratives straddle the line between conventional storytelling in a realist mode (their details seem ordinary, recognizable) and a more suggestive kind of fabulation. If they seem slightly surreal, it is because ordinary reality has been made to seem incomplete, not distorted beyond recognition.

“Enzo Panza” achieves more with less through a radically expanded timescale, essentially the story of a life, executed via a compressed narrative (fewer than ten pages), while the story itself is not so much elliptical as straight-out surreal. “I was still a small girl when I decided to kidnap Enzo Panza,” the narrator announces, and the remainder of the story relates Enzo’s life in a kind of captivity, although he continues to live in the girl’s home even after she herself has left and married (and is there when the girl returns after her divorce). Not even the girl seems to know the meaning of her actions, or Enzo’s:

What has he spared me, this Enzo Panza? What, with his constant presence, has he prevented happening in my life, and what, if anything, has he caused to happen? Does he care for me, my mother, my children? Is he escaping something, or is he just biding his time? Why, when I invited him into my life, did he agree to stay?

While this is otherwise the story perhaps most dissimilar to what we might have expected from the author of Vertigo, the narrator’s words here could certainly also have been uttered by the narrator of the earlier book in her brooding on the direction her own life had taken. However much the stories in Worlds from the Word’s End are more formally disparate, the disabused narrative voice in most of them remains distinctively the voice both Hotel and Vertigo prepared us to expect, Walsh’s writing creating its “surface tension” that, Heidi Julavits to the contrary, is precisely the kind of tension such “formally restless” works require.

Still, in Worlds from the Word’s End Joanna Walsh doesn’t simply repeat the approach taken in Vertigo but develops the adventurous aesthetic sensibility revealed in the earlier book in ways that are arguably both more orthodox — more emphasis on narrative, less intense focus on a single character’s perception — and more experimental — a looser attachment to realism, more audacious use of narrative elision and indirection. The stories in both of these books are fully-realized creations, but they also leave us anticipating what the author might do next.