Cool as in Cold-Press 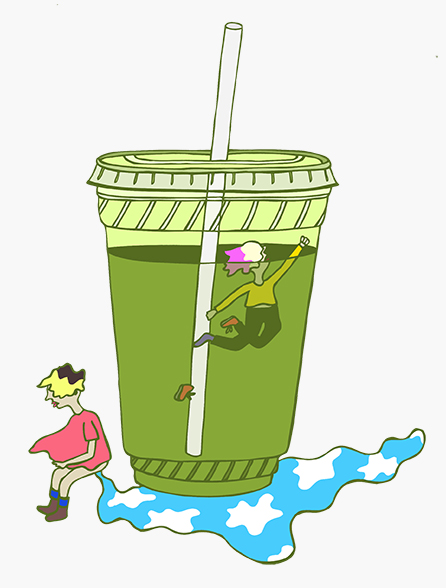 I only worked at the juice bar for a couple of months, but it made an impression. The shop played Patti Smith and The Talking Heads and was careful not to be too pedantic or woo-woo. The vibe was chill-purity—we sold ten-dollar juice to people who say, “fuck the rules” while, simultaneously, making the rules. Everyone who came in worked in advertising or real estate, and assisting them I saw, at close range, a life-style—which is to say mode of consumption—that seemed glamorous and, even more bizarre, almost within my grasp.

The shop, called Tiny Empire, has since closed but was on the ground floor of a condo building in Williamsburg—a neighborhood that has, in the last fifteen years, become a symbol and cliché of gentrification. With a tiled floor, white walls, white-stone surfaces, modern looking plants, and glass-fronted fridges filled with juice, Tiny Empire was pristine and shiny, like a hospital for the super-rich. But the interior also had a punk rock affectation: The smoothie menu and line-drawings by Jason Pollen were printed directly onto the wall; and the labels on the bottles of cold-press juice and dried mango were green and black, stark like they’d been xeroxed.

The shop’s owner—let’s call him The Man—was in his forties and covered in tattoos. In an interview with a blog, Cool Hunting, he explained that as a teenager he had been a straightedge vegan, part of a movement that had grown out of punk:

We hung out in skate shops, backyard half pipes and health food stores in upstate New York; caused trouble, skated, and drank juice . . . The activism fell off a while back, but juice has remained pretty constant.

The values behind the aesthetic choices of his youth had faded away, but his taste—in music, decor, and juice—remained. This style was the commercial manifestation of the organic farming movement (and its insistence on self-sufficiency and “saving the planet”) and of straightedge punk (and its values of individualism and anti-establishmentarianism). Despite having been separated from the principles that gave birth to it, the style nevertheless retained an exotic sheen of this conviction. This made the juice bar seem cool, which is to say seem like an aesthetic micro-resistance against suburban blandness.

On my first day working at the juice bar, The Man explained that it was very important that the shop stay clean, that the stainless steel and glass fridges be free of finger marks, and that I know the health benefits of the super-foods but not sell the product merely based on the fact that it was healthy. “A ten dollar juice is a luxury product,” The Man explained. The shop needed to be maintained like Yves Saint Laurent.

The girl who trained me had (like me) a bad bleach job and (also like me) a BA from Bard. The girl demonstrated how to use the blenders and taught me my brown-rice protein from my hemp protein. I watched as she entertained each patron’s insecurities, offering them affirmation and encouragement, and was caught up on the lives of the shop’s regulars. She made smoothie recommendations with an air of medical or psychological authority. Working at Tiny Empire, the girl had gotten really into juice; plus, it was fun getting to meet all the people in the neighborhood. “I don’t know how much you know about Williamsburg, the people who live here, but it’s interesting. Like, anthropologically.”

On the wall opposite the bar was printed—in angular black lettering—a paragraph describing, in the brand’s own language, the product:

It’s a big city. Which is why you can’t underestimate the small stuff. After all, it’s the small stuff that gets you through—whether it’s a swim across the Hudson or a ride on a packed L train. At Tiny Empire, we make small batches of raw, organic, unpasteurized juices that are packed with big flavor and essential nutrients. We find it’s all you need to make this city your own.

I read this over and over as I worked, trying to untangle the string of equivalencies within it. It’s hard to live in New York, the brand said, validating each patron’s feelings—of want, struggle, and need. Regardless of whether you’re doing something impressive, like swimming across the river, or totally normal, like riding beneath it in a subway car. Everyday life was equated with extreme challenge, and, so, patrons were encouraged to believe that their own lives were of epic proportion and their success inevitable and absolute. Once the feat of crossing the Hudson has been accomplished, New York will belong to you, and, so, your suffering transcended. Standing behind the counter at the juice shop, I knew this series of conflations led to an untruth, but it was a lie that I wanted—thought I needed—as I struggled to make a life, to make rent.

As I assisted patrons, the copy loomed on the wall behind them as a beacon and a riddle of what the city was and what living there might mean. It framed my interactions with the man in the black trench coat who wrote copy for the World Bank, the real-estate developer who would come in all the time shouting all about meditation retreats and celibacy rituals, and the hot lesbian mom and her impeccably dressed toddler. Each had a certain level of financial success in New York, as evidenced by the fact that they bought, with some frequency, cool—but kinda pricy—juice.

Yet, even as the decor invoked the city as a locus of cool, the copy insinuated that inside the city there might be many small kingdoms, each governed by an individual. But a city of tiny empires, strictly ruled, is unwelcoming to the co-mingling of disparate, contradictory ideas, lifestyles, and values, which is to say a city of tiny empires is suburban, is bland.

Closing the shop at night I would do all the normal things—wipe down the counters, sweep, mop, take out the garbage—and go through the fridge to remove the juices that would be expired by the next morning. I was then supposed to tally up this waste and text the numbers to my manager. But, because the juices were still fine to drink for another few days, rather then pour them out and recycle the bottles like I was supposed to, I would offer them to the people working in the back and then put everything left unclaimed into my bag.

Then I would leave, walking the bar and boutique lined blocks to the Bedford-Ave-L train to ride not west beneath the Hudson but east to the room in a rapidly gentrifying part of Queens that I was sharing with my girlfriend. There, I would put hundreds of dollars of organic, cold-press juice—which would supply essential nutrients that I needed to make the city my own—into the fridge we were sharing with our three Craigslist roommates. The juice was a luxury product, and having it in my fridge, even though I was not (and could not afford) buying it, allowed me to believe that I would have all that the brand promised: a bright—which is to say cool and moneyed—future. Yet, even as I basked in the brand’s glow, I understood that the glow came from the manipulation of counter-culture symbols within and for the marketplace of late capitalism rather than from a true manifestation of counter-culture values.

Working in the shop, I could eavesdrop as The Man had meetings about the shop. I remember one with a group of PR consultants. The consultants, all women, had primped and preened and were meeting with The Man about how to make the store into a cool neighborhood spot. (Instagram!) The Man sat as the women brainstormed people who would be good to feature on Tiny Empire’s Instagram. A model, Robyn Lawley, was suggested, and immediately the PR-pack leader said—not without a touch of resentment—“People love her. She’s so quirky. She shows off her stretch marks in Sports Illustrated. So real.” The shop’s desire to sell an aspirational gritty and glam version of New York was obvious; Lawley’s public persona was perfectly in line with this sort of airbrushed authenticity.

There was a guy who I worked with sometimes who had another job at the Apple store in the old church on Sixth, could never pick up shifts because he was always going to New Jersey to visit his mom, and would come to work stoned in the philosophical kind of way. He told me about all sorts of interesting things—sustainable farming in Haiti, smoking weed on the roof of the juice bar in the snow, and, most intriguing, an inner eye that worked as a locus of creativity and spirituality but which became coated with toxins as we grew up but could be restored with a diet of raw fruits and vegetables (read: cold-press juice). I wasn’t sure, but it sounded cool.

When the shop was slow, I would finish bottles—and then more bottles—of juice that had been opened as samples for customers. And then, sometimes, depending on how much of this juice I had drank, I would have to rush into the back to the small bathroom—which doubled as the office (labels, security camera monitors, mop)—lock the door, crouch over the toilet, and peer up at the monitor to make sure no one came into the store while (in juice-bar parlance) I rid myself of toxins. Other times, my urine would turn cloudy and stay that way for days. I googled it: Cloudy urine was sometimes the result of having ingested an excess amount of water-soluble vitamins and minerals.

Juice, even organic juice—marketed using loose, unspecific notions of the moral clarity of organic farming and punk rock rebellion—is a diarrheic, and, after a point, the body will start ridding itself of excess vitamins. But, the shop wasn’t really selling juice—or even the ideas of organic farming and punk rock. Rather, Tiny Empire sold the unspecific notion that these things are cool—the marketplace of late capitalism having reduced counterculture conviction into consumption whose function is largely symbolic.