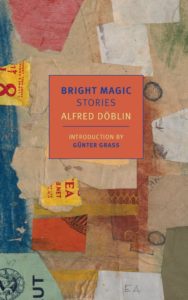 In college, majoring in German, I read the usual suspects: Goethe, Kleist, Kafka, Mann. I even read some unusual suspects, at least by American standards – writers like Christa Wolf, or Heinrich Böll. But I never read Alfred Döblin. Until recently, I hardly knew his name. Berlin Alexanderplatz was familiar; the title of a film directed by Rainier Werner Fassbinder. I knew Fassbinder’s Berlin Alexanderplatz was based on a novel, but I didn’t know the novel was Döblin’s. I planned to watch the Fassbinder before I wrote this review. Then I realized, days before my deadline, that Fassbinder’s film was, in fact, a miniseries, and it was more than fifteen hours long. Fortunately, Bright Magic, a new anthology of Döblin’s stories – the first to appear in English – is more approachable: page by page, sentence by sentence, the writing moves from the humorous to the grotesque to the philosophical to the tragic, offering small and lasting pleasures of the kind we don’t often get from a 500 page novel or a 15-hour long TV series. Döblin’s stories echo and reverberate with all of 20th century German literature, and the more we read, the clearer it becomes that other writers are echoing Döblin.

Born in Germany in 1878, to assimilated Jewish parents, Döblin lived and worked in Weimar-era Berlin, alongside figures like Bertolt Brecht and Thomas Mann. A measure of literary celebrity came with the 1929 publication of Berlin Alexanderplatz, which tells the story of an ex-convict through literary montage – a method that earned enough comparisons to Joyce’s Ulysses for Walter Benjamin to take issue with the comparison in a 1930 essay. When the Nazis came to power Döblin went into exile, first in France, then in Los Angeles. (We hear, today, of fights to save the Thomas Mann villa, the Bertolt Brecht House; about the Alfred Döblin residence, we hear nothing.) By the time Döblin returned to Europe in 1945 the literary world had moved on. Döblin died in relative obscurity. And, at least for the American reader, Döblin remains obscure: even Berlin Alexanderplatz is barely in print. An Amazon search turns up shoddy editions, old translations. I found a used Penguin paperback from 1980 – in “acceptable” condition – priced at $1,279.97. Plus $3.99 shipping.

So why has Döblin been forgotten? In an introduction by Günter Grass – from a speech delivered in 1967, ten years after Döblin’s death – the author argues that Döblin’s problem was his variety, the way his literary output resists a clear narrative. While Mann and Brecht “consciously conformed[ed] to a classicist plan,” and wrote from a classical tradition, Döblin was an “anticlassical writer”:

[Döblin] starts afresh with every book, refutes himself and his changing theories. Manifestos, essays, books, thoughts follow close on one another’s heels, a jostling throng that makes it impossible to see: where is the author in all this?

Grass is onto something: if we can’t see the man in the work, how can we be expected to line up to save the man’s villa? The variety of Döblin’s work may have hurt his chances at posterity, but it’s this same quality that makes Bright Magic such a joy to read.

Divided into early and late tales – the first batch from between 1904 and 1911, the second from between 1935 and 1948 – the book offers a crash course in the strange world of Döblin’s fiction, moving from fairytale to fable to mystery to something approaching science fiction. It is not so hard to see why Grass sees himself as a follower of Döblin: Bright Magic does, in fact, contain magic, and if these stories had been introduced to an American audience in the years of The Tin Drum and One Hundred Years of Solitude, they might have fit the historical moment. While the lesser of the early stories sometimes feel like curiosities or experiments, the best of them surprise and provide a pleasant sort of whiplash. In “The Other Man,” a gynecologist starts an affair with his secretary and marries her, then one day the doctor receives a letter from a stranger – an acrobat – who intends to “go after” his wife. The acrobat and the wife have not met. The acrobat makes a suggestion:

As for you, my dear doctor, I recommend, moved by my great goodwill toward you, that you commit suicide on the twenty-fifth of this month in Charles Park, leaving behind a specific statement of your motive.

P.S. I own an automobile and would like to put the car at your disposal while you make all the necessary arrangements.

The whole situation is funny, absurd, but what’s best are the details: the “twenty-fifth of this month,” and “Charles Park,” and the offer of an automobile. It’s in the details where Döblin transcends and hits gold, and he does it again in his description of the doctor’s reaction:

[The doctor] confirmed receipt of the latter’s cordial letter, dated today, thanked him for the binding appointment of date of death, and requested prompt delivery of the automobile, which he duly promised to maintain in good condition.

It’s the final phrase that gets me: the doctor’s promise to keep the car in good shape. In the world of the story, with its twisted logic and fate, the doctor’s acquiescence is not so surprising, but his politeness both ups the ante and somehow pulls our heartstrings.

Again and again in Bright Magic Döblin plays with the concepts that define the classic fairytale – that German form, harking back to the Brothers Grimm. Döblin takes fate to its absurd and logical conclusion. And in some stories, like “The Canoness and Death,” the sense of narrative inevitability is more explicit: in the title Döblin tells us that death is coming. The Canoness, who is something like a nun, spends most of the story’s five pages going about her daily business: walking, sleeping, sitting, and eating. The monotony of her routine combines with the clean simplicity of the prose to create something wholly absorbing:

The maiden sat stiffly behind the glasses of hyacinths. When the clock struck, she went to the refectory table, took a bite, and put down her fork. She left the hall. She sat in her room. All day she sat in her room, in a corner, her ruined face turned to the wall. The snowlight falling into the room turned faint; the colors dissipated on the carpet. Two trembling hands raised the cylinder from the lamp in the dark, then the lamp was violently put out again. Clothes fell to the floor.

When death appears, near the end of the story, it comes as a shock. And what makes the turn so affecting is the way Döblin maintains the simple, staccato rhythm:

She fell asleep. Woke up in darkness. Brawny footsteps in the room. The bed creaked. In one leap, Death jumped into bed next to her.

Death is made to feel almost routine. When death appears, we know what will happen. The arrival of death feels arbitrary, predetermined, and this feeling is what makes the ending so moving. It’s as though “Death” was written into the title of the story, and for this reason alone Death must appear; its arrival has been delayed as long as possible, but with two paragraphs to go, there’s no more delaying. Death is here, and there’s nothing that the Canoness or Döblin or the reader can do.

In the late tales Döblin delivers on the promise of these his stories and stretches the form of the fable to its limits. History – with a capital H – comes more clearly into play. Here, in “A Fairytale of Technology,” is Döblin’s matter-of-fact description of the massacre of Jews in Ukraine:

And one day people needed money again, and look, here were some Jews, and their business had been doing well lately, so people set some stories going around, about Easter, about how a bad word had been said about a pope and a Jew had laughed. . . . And what will happen, they’ll band together and riot, some word has already leaked out but it doesn’t help, pogroms will be pogroms, blood flows, but the Jewish people aren’t children, blood eventually flows on the other side too, one doesn’t let oneself be torn to pieces by wicked beasts.

Döblin provides essential information in asides: about the voice (“and look), and about the gruesome action (“blood flows.”) In its tone, its structure, its compactness, and its insistence on a clear moral, the story is reminiscent of a biblical parable. Yet the setting is unrelentingly modern: the action centers on a radio. In its concern with technology, the story is reminiscent of a short piece by Robert Walser, a Swiss modernist and contemporary of Döblin’s. In Walser’s “Radio,” the experience of listening to a radio for the first time is used to narrow our attention, to bring us into the narrator’s head. In Döblin the radio does something different: it connects people, and in turn connects them with history. A father and son are separated during the pogroms. For years, the father waits for news of his son, a singer with a “beautiful voice,” until one day he hears the voice on the radio. His son has become a famous cantor in America. Telegrams are exchanged. Father and son are, in a way, reunited. Here’s the moral:

And the radio did this thing, and that is technology, and it led a son back to his father, and both of them know that God lives and is a rock to build upon for whoever believes in Him.

Döblin converted to Catholicism in the early 1940s; this story dates from 1935. Even if the moral is tongue-in-cheek, it seems imbued with optimism. It’s an optimism the reader can’t help but share.

The two longest stories in Bright Magic are “Traffic from the Beyond” and “Materialism, A Fable,” and in their contrast they show us what Döblin does best. “Traffic” is an absurdist ghost story that moves toward a punchline, a clear resolution; “Materialism,” on the other hand, takes as its starting point a simple conceit – Nature (capital N) has learned about Materialism, about science, and the animals, plants, and atoms are depressed – and from here Döblin moves in unexpected directions, surprising us at each step. The story satisfies not in how it ends, but in how it moves. We feel, on each page, Döblin pushing the envelope, widening the scope of the story.

Reading Bright Magic I thought again and again of Robert Walser, who, like Döblin, was for many years a forgotten writer. Since the early 2000s Walser has enjoyed a resurgence: publishers like New York Review Books and New Directions have issued newly-translated editions of his novels, stories, and writings on art. Walser – like Döblin – was prolific. And he doesn’t fit easily into any box. Yet Walser’s work shares a clear affinity with current tastes, current styles: his short texts, in their humor and insularity, sit comfortably beside the stories of Lydia Davis (who has translated Walser in the anthology Looking at Pictures). How Döblin fits into current tastes is harder to say. While Walser feels like a writer who stands outside of time, Döblin somehow operates in many times at once: a 20th century of pogroms and wars, a past of fairytales and fables, and a future of radios, science, and the possibility of connection.