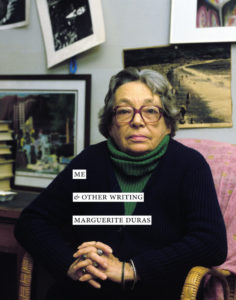 There are two sentences in Me & Other Writing by Marguerite Duras, separated by as many pages: the first is, “They told me: ‘Your child is dead.’” The second is “The child who is here now, sleeping, that one, just now, laughed.” If I actually wanted to summarize her—the Me of the book’s title, taken from the essay in which she concludes, “What makes me want to cry is my violence, is me”—I would locate Duras in the space between those sentences. I would spend years trying to map “the horror of such a love,” as she calls it. I would never turn more than two pages.

When the name of Marguerite Duras comes up I find that it is usually in the context of Alain Resnais’s film Hiroshima mon amour, which she wrote. But the writing gathered under the name of Duras deserves to exceed that however rightfully fêted document of love and annihilation. A celebrated essayist, director, and author of fiction, Duras also frequented the hinterlands of experimental journalism, writing pieces for newspapers and magazines from Libération to Vogue that combine the jagged incongruities of imagery and texture characteristic of her stream-of-consciousness style with her equally unmistakable linguistic facility that tips more often than not into the poetic. Until now, however, most of Duras’s journalistic writing has been unavailable to readers of English. Me & Other Writing brings this facet of Duras to light. In doing so, the volume manages to offer an accessible primer to her work in general as well as a careful assessment of what it is like to attempt to render Duras’s prose into English.

This, as the translators point out, is particularly difficult. Even for the French it is nearly impossible to pin down exactly how Duras does what she does. Without indulging in too much treacle, I don’t think anybody can seriously deny that French has a certain in-built mellifluousness, with its many stopgaps against sharp edges and sudden shifts in register or flow; like most Romantic languages, French seems to expel, of itself, the silence around and under what can be said. Spoken French provides a case in point in the liaison, for example, which entails that one pronounces the (usually omitted) consonant at the end of the word when the following word begins with a vowel—called sandhi in linguistics, this process fuses sounds across words and, in the case of French, phonically eliminates most possibilities for vowel-vowel pausa. Thus flow preponderates over syntax proper, making the impulse to fill silence with sound a structural necessity within the language itself. This internalized horror vacui makes it especially difficult to explore or—quelle horreur, indeed—revel in rupture and irregularity, to compose a text that is as much space as substance, to make the silences between words as legible and freighted with meaning as the words themselves. In a word, Duras writes this irregularity, this space, this precipitous emptiness, weaving it through the very atoms and molecules of her language, and she makes her reader attend to the silences and lacunae that puncture the landscape of not only her language but language itself. And for all that, her writing is still beautiful. Anybody who has seen her Atlantic Man knows what I’m talking about: her frequent shifts in tense and register, her crescendos of short, opaque phrases that layer meaning upon meaning not syntactically but texturally, her open and constantly fluctuating notion of what, if anything, separates subject from object and defines the tenuous position of each—this, and much beside, all mixes in a way that is simultaneously terrifying and hypnotizing, turbulent and soothing, like the very ocean she spent so much of her life writing about. Crucially, Duras both mobilizes and subverts the very movement of the French language to draw attention to what is not written as much as what is, to the combined impossibility of fully inhabiting and of fully escaping the strictures of grammar and syntax. “The moment we try to capture this fleeting quality in English, it falls apart,” write the translators, “When we try to dissect it and piece it back together, it’s suddenly gone. When we strive for clarity, those phrases that form a logic solely unto Duras, the deep current of her writing, seem to lose their glimmer, their truth. They cannot be pinned down because, like ‘streams, lakes, oceans, . . . they flow.’” In this connection it is not surprising that Samuel Beckett and Georges Bataille so deeply admired her work—it opens onto the unnamable; in it, we seem lost like water is lost in water.

How do you translate writing like that? I wouldn’t know where to begin—thankfully, translators Olivia Baes and Emma Ramadan both attempt this impossible task and thoughtfully attend to the nuances of their project’s very impossibility. What results is something that sounds unmistakably like Duras and, even upon first reading, achieves the very same effect Duras’s writing does in the original. As the translators themselves identify, Duras’s work at its best “immerse[s] readers in an experience of the ‘unreadable,’ that deeper, more immediate state of existence.” Here they quote from “Reading on the Train,” one of the best essays in the collection, in which Duras recounts the experience of reading eight hundred pages of War and Peace over the course of a train ride. What was an attempt to get through a book in order to return it to the booklender in time turned into something approaching a spiritual experience:

It’s as if I had realized that day and forever that a book was contained between two layers superimposed with writing, the legible layer that I had read that day as I traveled and the other, inaccessible. That layer, completely unreadable, we can only get an inkling of its existence when we’re distracted from a literal reading, the way we glimpse childhood through a child. It would take forever to explain and it wouldn’t be worth the effort.

Importantly, however, the attempt to move from language to the immediate and unnamable is not just an artistic strategy or spiritual initiation, but a political project. Me & Other Writing bears witness to Duras’s personal-political imperative to explore and transgress of the conventions by which the self is both constructed and represented—her life’s work is to question, as Dan Gunn points out in the introduction, the absurd notion that one could possibly “live honestly or meaningfully within the conventions dictated by society, with its religions, its laws, its tyrannies, its grammar, its syntax.” She seems to want to access something primal and irreducible through writing, not just as a demonstration of her artistic prowess but as a way of making us confront the impossibility of ever reducing our selves and our lives to nouns and verbs. It is unsurprising that she speaks so often of the ocean and of childhood: both seem unlimited, neither in any case can be fully reduced to the rudiments of conventional description, and each is finally possessed of a secret to which only silence really does any justice.

One might think we evolve out of childhood by developing defenses against aggression and flattening our reason, but this is merely a façade: the jumble represents the oceanic mass of our first hour, it’s entirely of the same substance, the same force, the same danger. Everything is open. We are born with our minds open.

It’s absolutely horrible to find yourself before a book you can’t write. I was alone with myself. No one could help me.

For Duras, again, what cannot be said is freighted with as much meaning as what can, and each of us is finally a child borne off on the currents of what cannot be written.