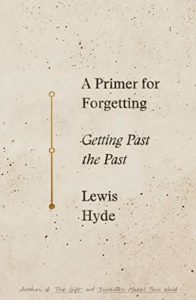 Lewis Hyde’s A Primer for Forgetting is like this: koans, digressions, clipped asides, a history of forgetting that forgets to be a book and is instead islands of text, a breezy archipelago.

See? Like that. But imagine each asterisk is a page. Reading Primer in public gave me the thrill of fooling onlookers: they thought I was getting through a big book quickly, operating under the naive assumption that these pages were filled with words.

Divided into four “notebooks,” which are themselves structured around a loose group of aphorisms, Primer more often than not gives you a sentence or a paragraph per page. Hyde also adds pictures, photographs of artworks he’d include in a hypothetical museum of forgetting.

But Primer is by no means light. It’s a beautiful book that leaves most of the work to you. But that work doesn’t feel like work, it’s not a puzzle to be solved. It’s less Cy Twombly, more James Turrell. The book creates clearings that allow you to comfortably contemplate what everyone’s afraid of: blankness. In this sense, Primer invites what most books hope to stave off: oblivion.

Forgetting is easy to resist. Easy to villainize or associate with the present, with whatever’s new and scary and young. Hyde casts memory as conservative fantasy, in which you can say that _____ (the printing press, the internet, life right now) makes us forget what’s really important, the past, which is fragile and needs to be protected because _____  (the old love, the old country, the old life) is the only thing that ensures our safety.

Pledging allegiance to memory makes you feel part of something bigger; that’s the lie, at least.

But oblivion, of course, is bigger. More people are forgotten than remembered. Oblivion is more serious than history.

The priority of oblivion frightens us which is why we try to ignore it, obviate oblivion. People who fight forgetting are themselves afraid of being forgotten.

But what if we tried looking the black hole head-on? Hyde argues we’d stand to learn a lot.

What are the pleasures of forgetting? Freedom from identity traps. Hyde dissects his memories of feeling stupid, illustrating how childhood inadequacy (his mother wrote letters to Hyde’s grandparents stressing that poor little Lewis wasn’t smart) made him hate himself and change. He gets into Harvard’s graduate school, doing his parents proud — except by this point his parents are dead. Once Hyde lets go of his motivating resentment, his reading becomes a gift to him again; a pleasure rather than a revenge on his younger self or his parents.

What are the uses of forgetting? Hyde talks about amnesty, political forgetting. Although it’s easy to feel uncomfortable with this, and think that he’s asking us to forget things we should remember, that by forgetting atrocities we’re letting history’s villains off easy, Hyde cites Borges’ insight: vengeance and forgetting are two words for the same thing: oblivion. This is a variation on the “the best revenge is living well, without you” bromide.

I didn’t buy this argument at first, needless to say. Countless nefarious actors benefit from our stupidity around history. What about the hoards who “forget” American horrors, from the Native American genocide to slavery to the flagitious actions of ICE? Doesn’t bigotry rely on ignorance?

To which Hyde responds: Bigotry relies on willed ignorance, which means lying. And liars have to remember their lie, keep their story straight, keep their fiction — their odious history — alive. Actual oblivion belongs to the innocent.

Primer argues that a cracked-up memory can be a beautiful thing. Think of each slip of the tongue as a window onto what you really think. Hyde notes that memory is only stories, fictions. Part of the fear of senility is the implication that we’ll finally have to face the music. This is who you are: your momentary impulses and dependence on others.

The most beautiful passages here reflect on Hyde’s mother in the last years of her life battling dementia. As she forgets, you might say that we see dementia defeat her. But lovingly Hyde questions our assumption that dementia “defeats”; an antagonistic relationship with forgetting (with loss in general) doesn’t do us much good and in fact distracts us from enjoying what’s still available to us.

Hyde’s mother forgets his name and looks sad that she can’t greet him when he visits. So he says “Lewis is here” and she calms down. Now they can enjoy being together. He gives her the gift of forgetting her dementia for a second.

There’s one page that’s empty other than the line “Preparing for my own dementia.”

I read Primer as allegorically about death, the big forgetting. You forget everything, even mind, self. It’s like you spend your whole life fishing around your garbage disposal for the valuables you keep dropping down there — that’s remembering. Then one day God flips the switch and the disposal disposes. The end of memory is oblivion like the end of life is you-know-what.

Our fictions of deathlessness are memory fictions. The promise of heaven is one of reunions, memory turned inside out. Even hell has the consolation of commiserating with others who remember what life was like.

Memory means control. It means being taken seriously. It means alluding precisely, reciting the right lines, assigning value, persisting and propping up permanent meanings. That we end life forgetting everything is humbling, but not necessarily depressing.

Several of the exhibits in Hyde’s museum of forgetting reflect on geological time. That’s the timeline where every proper name you know, every artist you love even abstractly, is nothing compared to the lifespan of land. Further out, considering the timeline of the universe, even the names of rocks, elementary life forms, chemicals, mean nothing.

These pieces of information, which comprise our personalities, are gifts on loan. We remember things to pass the time. What we remember is the source of ourselves but these are sandcastle selves. What makes me myself is who I know, whether or not I know their birthdays, whether or not I know what to do at work, how to drive a car, write, whether or not I’ve read this book. But these things will eventually recede into the distant past then oblivion; so will I. Although I “know” this, I don’t feel it. What I can feel is the sensation I’m forgetting something, I feel that every day, and extrapolating from that experience I can intimate the horror at having forgotten everything. But beneath that horror might be something approaching grace, if Hyde is to be believed. In other words, even the horror of forgetting might be forgotten.

Hyde, at 74, has penned a poignant goodbye to language, accomplishment, memory, and pride; he guides us to the end of information, which is gratitude for the amusing pastime of learning then a surrender to nothing.

The staccato pace of the book suggests continual beginning, continual ending, each page a terminal point, appreciable in and of itself.

Funny story: I tried writing this entirely from memory, at first. But I couldn’t remember the book’s title. I can only interpret this as a measure of Primer’s success.