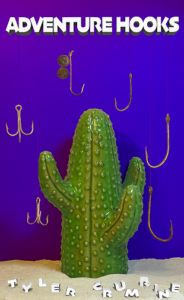 Adventure Hooks is a small book / the frame of its content relates to three twenty-sided dice (3d20) / dependent on the game master’s roll, there are fifty-eight possible scenarios / along with two forbidden rolls (a one or a two, which is impossible to do with three dice) / the scenarios in this book are original and thought-provoking / they’re often hilarious and surreal //

Reading this book, I was reminded of Sebastian Castillo’s 49 Venezuelan Novels / not because the two have any substantial similarities in regards to their content / but because they draw from a similar type of creativity //

I’d classify both of these books to some extent as collections of micro-fiction / in an incredibly short timespan, they create worlds that are so large and full of potential / in the case of 49 Venezuelan Novels, these narrative threads lead the imagination towards very literary places / where the reader begins to fantasize the kinds of circumstances that might surround a previously mentioned situation or the life a particular character / in Adventure Hooks this openness is presented almost as a gift to the reader / an invitation to form the narrative yourself / knitting the provided threads and forming something completely your own / Crumrine is presenting his reader with a series of moments that branch out into endlessly varied narrative paths //

While reading I found myself imagining all the different campaigns that I could make with these prompts / “when entering a new location, always roll a 1d20.” / after each section, it felt as if I’d read an entire book / or experienced an entire campaign / my imagination immediately filled in all of the empty spaces, and clarified any ambiguities / and I think this is the intention / these are adventure hooks, they are jumping off points / you read them and they lay the groundwork for a variety of quests / Crumrine really creatively invites the reader to build their own stories out of what he has given them //

Naturally these scenarios (which all begin with the phrase “In This Adventure…”) are written in the second person / they read like instructions or suggestions / a friend of yours messages you a thought that they had over dinner / “sometimes you have to suffer for fashion.” / and you think about that thought for a while and it gives birth to new thoughts in your head / which you message back to that friend / and you go back and forth until something wholly absurd forms between the two of you / “it emerges from your mouth, inch by inch, your jaw miraculously unhinging.” //

The writing in this book does not feel as if it’s meant to be read / it feels as if it’s meant to be performed or spoken aloud / and this seems obvious, being that the book, to some extent, intends for you to use it as a jumping off point for your own role-playing games / but the book never feels like it’s putting in the effort to fit this mold / it’s never straining to adhere to that format / it’s more like a reminder that you’ve left for yourself on the refrigerator / something to remember, or to keep in mind as you move forward //

Crumrine is working with a very versatile type of literature / which exits in a variety of categories / at the beginning of the book, the reader is told to roll a three-sided die in order to determine how they might approach the proceeding pages / this, along with the forbidden rolls at the end of Adventure Hooks, create an atmosphere where the separation of reader and writer starts to disappear //

You are not the audience of someone else’s art / you are a participant in it / to some extent, it feels like your presence is the most important part of these hybrid poems / they are trigger words meant to activate your brain //

The contents of this book might be classified as a set of afflictions and accusations / there are things that happen to you, and things that are said about you / “no one believes in God and you’re performing miracles.” / both of which promote a constant engagement / the world changes around you / this is not a place abstracted by distance / you are present and active / when Crumrine says that you’re performing miracles, you immediately imagine yourself doing so, in whatever futile or absurd form that would take //

Adventure Hooks style and structure mean that it is often devoid of characters / or at least there are no main characters / people take non-specific, usually speculative roles / you hear a woman says something about you / or the townspeople have started behaving strange / you are given a space to fill / and all of this is pretty tantamount to role-playing games / but I think what makes Adventure Hooks special is the way that it blends these rpg elements with such engaging prose //

Mike Corrao is a young writer and filmmaker working out of Minneapolis, where he earned his B.A. in film and English literature at the University of Minnesota. In 2016 he was an artist-in-residence for the Altered Esthetics Film Festival. His work has appeared in over 20 different publications, including Entropy, decomP, Cleaver, and the Portland Review. His first novel, Man, Oh Man will be released from Orson’s Publishing in October 2018. Further information can be found at www.mikecorrao.com.