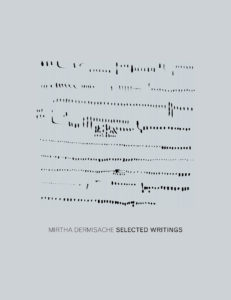 Perhaps the key to understanding Mirtha Dermisache’s work lies in the space (the interval; as in temporal, as in temperamental) between two of the more provocative remarks she made about her practice shortly before her death in 2012.

“Illegibility is a key aspect of my work.”

“There are no closed forms.”

That first statement might lead one to believe that Dermisache identified primarily as a poet, one for whom asemic writing was a bridge between early modern traditions that dared to smuggle esoteric knowledge in plain sight and Surrealist campaigns to raise the undisguised churn of the unconscious to the surface of everyday life. But the words “poem,” “poet” and “poetry” are conspicuous by their absence in this beautiful volume, a joint publication by Los Angeles’ Siglio Press and Brooklyn’s Ugly Duckling. Indeed, Dermisache, an Argentine who dedicated much of her career to arts education, shares more in common with graffiti artists than crafters of verse. It may read like an apothegm, but the second statement attests to how intensely this artist was concerned with movement and process, with signature ornamentations and the complications writing’s materiality undergoes as soon as it inscribes its value within the commons.

In fact, reading through the brief critical afterword to these Selected Writings, one gets the impression that Dermisache would have balked at the aristocratic connotations of the poetic — writing that, even at its most avant-garde, is perfectly legible yet frequently languishes unread. By all accounts, Dermisache instead wanted her unreadable writing to be seen and even interpreted widely. She largely eschewed traditional publishing, dedicating as much of her energy to exploring the ways in which textuality is encountered — and mediated — as to creating textual objects. When interacting with these Selected Writings, it’s vital to remember that, in their original state, they would have been presented in formats associated not with the enlightening obfuscations of literature but with the utility of communications and informational resources: newspapers, memoranda, books laid open as if in perpetual use, like those directories and encyclopedia volumes still thumbable within our public libraries.

However, to quote editors Daniel Owen and Lisa Pearson, this interest in the “democratic” is not to suggest that Dermisache emphasized discourse to the exclusion of linguistic play. Selected Writings reprints two important books — 1971’s Sin título (Libro) and 1972’s Libro No. 1 — in their entirety, pairing them with a selection of 16 individual works created between 1970 and 1979. The latter in particular show off Dermisache’s range, from the brittle and calligraphic to the densely “written over.” Sin título (Libro) takes up several of these modes and subjects them to a kind of molecular variation. Think of this “book” as a primer that instructs us in nothing other than how to brilliantly rearrange loops, humps, and strokes (the hand’s path from one letter to another) into a wholly othered coherence. In fashioning an architecture out of the familiar tracings of Latin script (or, still imagining the simultaneously gesturing and making hand, holography), Dermisache reveals herself to have been a sort of composer. After all, she need not have based her asemic writing on pre-existing signifiers. She could have taken inspiration from pure figuration: the swirled asphalt of street repairs, or the meanderings of snails, or the chance procedures that produced Duchamp’s standard stoppages. But a legibility still whispers and mumbles within Dermisache’s anti-documents. Viewed through the lens of musical scoring — which also proceeds from left to right and relies on lines and characters for its didactic import — her texts aren’t nearly as mute as they seem. Rather, they’re overrun by unpronounceable phonologies. Therein lies some of the greatest pleasures this work has to offer.

That same sense of barely suppressed vocality causes the shapes that populate the pages of Libro No. 1 to vibrate with unmistakable tension. Blocky they may be, and seemingly immovable, yet, as they repeat and vary themselves, they begin to resemble audio waveforms fulsome with possible formants. If there are utterances here, however, they can’t cover up all of the ambiguity unleashed by our attempts to decipher their encoding. Is one to read the dark characters or the light space surrounding them? Both simultaneously? Should one allow one’s eye to travel down the length of each mark, each one just stepped or ragged — a vestige of deliberately applied pressure and ink’s specific gravity — enough? If so, how does that verticality complicate the pull the right-hand margin has on the Western eye? Or is one to take in each page at once? With writing such as this, what counts as a unit of meaning?

For this habitué of books who still believes, at some level, that reading’s faith in transparency is not entirely misplaced, Libro No. 1 has the remarkable effect of stranding one’s attention between looking and reading. From that position, questioning whether reading is really looking at all starts to feel only natural. Indeed, having spent this much time with her Selected Writings, I’m convinced that their author truly cared about uncertainty. Dermisache does not treat uncertainty as a pretext, or transcendence in absentia. While her asemic writings may be self-evident, they aren’t resolved. There’s no Esperanto here, nor are there hieroglyphs or pictures in the conventional sense. Confusion is her point and her end, less in the sense that confusion is frequently a prelude to comprehension and more because confusion is typically possessed of indeterminate dimensions (confusion is a phenomenon; it can endure a long, long time). So one stares at Dermisache’s works, flipping pages that go nowhere, whether argumentatively, narratively or affectively. But the staring is anything but vacant and the motion isn’t wasted. In the continua opened up by these texts, staring is to perception as silence is to listening. The one excites the other.

Ultimately, Mirtha Dermisache asks us to reckon with a literature which proposes that an estranged reading might be the closest reading of all. What if a reading alienated from the social conditioning we’ve interiorized by accepting reading’s rules and default settings gives us back our private languages — perhaps even our first languages? What then? Call the result an inverse magical realism, or an attempt to salve the wounds that magical realism can often only diagnose. “See,” Dermisache’s work seems to say, “the world you now occupy is one you have constructed, and are reconstructing with each new passing moment.” Call that generosity, but a kind whose lavishness can be formidable, if not altogether fearsome.