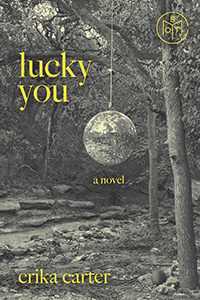 Girls are a conundrum. An excess. They simply mean too much. Lo-lee-ta: the tip of the tongue taking a trip of three steps down the palate and all that. Girls are accretions of desire, of expectation. They are material beings, a metaphor for modernity, a market demographic, a discrete cultural category, an idea. And also, they’re something else entirely: something ineffable, slippery, hard to understand, harder to look away from. Girls, girls, girls goes the flashing neon sign, the hair metal song, the whole world, if you’re paying attention.

Once we become women, many of us harbor nostalgia for our girlhoods, even as we recall running from them as if from a car fire. That’s because coming into sexual power as a girl is a potent contradiction, both a powerful gift and a weighty burden. For many, the looming question of surviving into some future fixity is quite a literal one. Some girls go wild. Some go fucking crazy. And some don’t make it at all.

Lucky You, Erika Carter’s debut novel, is about three girls — young women, really — living in Arkansas. They’re ostensibly friends, though ‘frenemies’ often feels more fitting. The year is 2008, and the financial crisis circulates diffusely but unignorably above the action of the novel like an unwelcome weather pattern. It can be felt in the generalized but pervasive hopelessness that is the book’s defining mood, and in the girls’ precarious employment. “What they’re saying on TV is a fact,” one girl tells another. “It’s really, really hard to find a job.” We learn early on that the University of Arkansas English degrees they’ve very recently earned are “worthless.”

The novel’s protagonists — Ellie, Chloe, and Rachel — orbit Viceroy, a Fayetteville dive that serves stiff drinks and thrice-reheated lobster bisque of unknown provenance. (After all, “this was Arkansas,” Ellie thinks.) As the novel opens, Ellie and Chloe are working at Viceroy as waitresses. Rachel has since moved with her boyfriend Autry to the nearby Ozarks to pursue health and a life off the grid, and she regularly tries to persuade Ellie and Chloe to join them.

The pacing of the novel is slow, syrupy as grenadine, though punctuated during working hours by the incessant bickering of Bruce and Lorraine, the couple who own the bar. Their characters serve little purpose, except to supply a steady stream of marital acrimony for our rudderless millennial heroines to puzzle over. (Also, Bruce’s fixation on Ellie is how the reader knows she’s the hot one.)

Ellie mostly pines for her boyfriend Jim, a touring musician whose parting words, “Don’t be sad,” are the perfect tagline for not-really-trying boyfriends the world over. She blots out her feelings by drinking heavily at work and at home — Fireball, Rumpelmintz, Jameson, vodka — and has frustrating, depressing, occasionally dangerous encounters with boys she finds insufferable.

Chloe, a vegan with tricotillomania, leads a lonely life in the apartment of a disappeared girl whose mail she opens. (“Why not? They were connected, she and this gone person.”) She lives beside a frat house, which lends her alienation a bit more credibility, and resents Ellie for being prettier, while also wanting to kiss her.

When Ellie tires of Viceroy and is ready to shape-shift, she moves from Fayetteville to Bentonville and takes a square office job at Wal-Mart corporate, where she embarks on a get-on-your-knees, Secretary-style tryst with her boss, who’s old enough (and married enough) to make her feel she’s naughtily transgressing. Still, as with much else, the relationship registers to her as “an enormous joke. Soon she would quit doing ridiculous stuff like this. When her real life started, she would quit humiliating herself with ridiculous behavior.”

Soon, Ellie and Chloe decide they’d be better off living with Rachel and Autry after all, and they move to the compound. There, they find Rachel happily composting, baking homemade bread, wearing Crystal deodorant, tending to a blooming garden, and nonspecifically detoxing to purge herself of “unhealth.” In the couple’s bedroom, “seedlings grew in black pots everywhere, so the room smelled like Earth.” Rachel finds satisfaction in being “just like one of those old fashioned married couples you hear about” and enjoys domestic labor: “Housework felt so feminine and throwback — so sexually retro. It was fun playing house […] Rachel realized that [Autry’s] grandmother had probably not felt so edgy and sexual doing housework, but the times they were a-changing.”

Once all together, the foursome flirt, eat fruits and vegetables, smoke pot out of apples, watch ASMR videos, and read aloud from books about with titles like Give It Up: My Year of Learning to Live Better with Less. They chant things like “We are one mind, one trance.” Autry, a toxic narcissist, spends his time planning the Project, a creepy cult loosely based on health and environmentalism, and trying to write a memoir about their experience. “It’s a way of life,” he tells the girls, ”if we can get others onto it, too—I mean, we could legit like, save the planet, I’m just saying.”

The group’s ethos is vague, to say the least, revolving around the nebulous promise of preternatural “wellness” that will feel familiar to most contemporary, beet-juice-drinking readers. It’s part 1960s back-to-the-land purism and part freedom fetish, but filtered through 21st century neoliberal ideas about self-reliance and the looming apocalypse that is climate change. And it is everywhere contrasted with its opposite, “unhealth,” a concept that includes alcohol, Lean Cuisine, and also grown-up pressures like “money. Clothes. A job. A car. An apartment. Keys. Taxes. Facebook. Credit Cards. Alarms and notifications.” Their “lifestyle” takes on an even more sinister cast, as Autry and Rachel begin to pressure the other girls to pursue well-being through asceticism, and Autry fails to take Chloe’s health problems seriously.

Over time, at Autry’s jealous, paranoid direction, the foursome grows increasingly cut off from the wider world. The water turns rust colored, the plants die, the granola grows stale. The girls, ever more prisoner-like, begin to fantasize about Coke and nail polish. Things begin to fall apart.

Lucky You is dominated by a kind of rock-kicking apathy and joylessness. Rachel, Ellie, and Chloe spend their waking hours in a sluggish state of distraction, but as women in their early twenties, they’re still always reverberating — often against their better judgment, sometimes seemingly against their own will — with a shimmering, restless energy. With sex. And it’s a particular sexual power they wield. Though Carter doesn’t offer much description of the girls’ appearances, the reader gets the sense that their appeal is similar to that of the Virgin Suicides sisters in their faded, frosting-colored dresses: stringy-haired, skinny, scabby, faintly androgynous, faintly infirm, white as the driven snow. The girls drift about listlessly in short shorts, an irritating but steadily compelling reminder that laziness is a privilege, and that prettiness, especially in wheat-colored form, still captivates us, perhaps above all else.

Carter succeeds in creating a lush but airless environment in which the anxieties of “adulting” — finding direction, meaning, maintaining a home — are amplified to crippling effect. As Rachel thinks, “they talked […] about changing their lives, the Real World. But the more they talked, the more they tried to pin the details, the more overwhelming and impossible it all seemed. What would they do?” The girls know they should care about things like the environment and politics but they just can’t summon the energy. They even lie to each other about voting for Obama (who they at least agree is “hot”) when they haven’t bothered to vote at all.

With her laconic prose, Carter enacts a sort of millennial laziness that sometimes feel deliberate and expertly controlled, and other times feels accidental or, worse, like actual laziness. In much the way a teenager answers questions in as few words as possible, the spare, withholding language of the novel can make for maddening reading. When Chloe first lays eyes on Ellie’s boyfriend Jim, for example, all the reader gets by way of description is that that’s “pretty much what she figured he’d look like.” Later, reflecting on Autry, Ellie “tried to remember what she herself had ever found cool about him. She couldn’t think of anything. All that surfaced was that Rachel had once found him cool, and so he had been cool, because Rachel was cool.” In its deference to youthful boredom and lethargy, the book often reads more like some YA fiction, or an actual, tormented-but-unintelligent young person’s journal.

This might be why life inside Lucky You feels the way life often can: perfectly pointless. The discovery that the book’s title comes not from a slot machine or fortune teller, but from the message stitched into the fly of Lucky Brand jeans does little to help: “Every time [Chloe] pulled the zipper and worked the button she wondered—was this supposed to be ironic, or sexy?” Who cares, I found myself thinking.

Still, the paradoxes of femininity in painful blossom are portrayed believably here, and they make for absorbing reading. The many girl-flavored miseries of the book are tempered with pleasure, from the perverse comfort of depression (“she could hide in it and no one could find her”) to the blunt satisfaction of a brutal affair (“the pain was as intense as pleasure”), to the sense of easy superiority that turns on a dime and becomes self-loathing (“she cringed at her stupidity”). And Carter’s gift is in drawing these contradictions wryly, wisely, and seemingly without effort.

Despite its simplicity and near affectlessness, Carter’s characters, particularly Ellie, linger in the reader’s mind. But Lucky You also registers as a bit of a trick. The novel hogties you in this rambling, rural no-place, suspends you in stoner time, and makes you wait, as though something will be revealed, some larger meaning eventually delivered. But the reward never comes. By the end of the novel, you realize that may be the entire point. It’s a bit like the sedate emptiness that sets in after leaving a strip club. You step back out into the world, a bit discombobulated, melancholy, not quite sure where the time went. Nothing has changed, nothing meant anything — you were just transported temporarily, by the glisten of skin, the promise, the spectacle of girls.

Autry’s Project ultimately fails, of course. And the girls go on to try to reinvent themselves, resuming various forms of “unhealth” in the process. (By the novel’s end, Rachel is watching TV and eating Taco Bell tacos in Dorito shells with a new, tennis-playing beau.) But they end up no better off. Two are back waiting tables at Viceroy. All are disoriented, alienated, their existence defined mostly by their boyfriends.

The note that closes Carter’s novel is the same one that has been ringing out for more than 200 pages: becoming an adult is sad. You thought you would’ve done something, become someone by now, but alas. Here you are. “This was life,” thinks Ellie in the book’s final pages. “This was a thing people did. This was how people lived.” It’s a sentiment she’s been repeating, a mantra meant to lull herself into acquiescence.

Maybe that’s what we all have to do in order to make peace with meaninglessness, Carter suggests. Maybe that’s just how it is. And that’s if you’re one of the lucky ones.