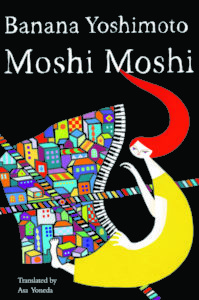 At the beginning of Banana Yoshimoto’s Moshi Moshi, Yoshie the narrator and her mother are recovering from the sudden death of Yoshie’s father, a professional musician in a British-influenced Japanese rock band named Sprout. Months after his death, the two women go to a French restaurant in the Tokyo neighborhood of Shimokitazawa to eat a shave ice, the first food either of them has craved since Yoshie’s father’s death. “I’d almost forgotten what it feels like to taste,” Yoshie’s mother says: “I guess the body lives, even if your heart’s dead.” But as the novel demonstrates, Yoshie’s mom has it wrong – or at least a little backwards: the body lives, and feels, the heart’s deaths and rebirths. Grief is a full-body experience, but so too is joy.

On one level, Moshi Moshi is a novel about recovering from a grief that seems inconsolable. But Moshi Moshi is also about the ways we make community, and the way we construct ourselves as persons, through what might seem on the surface to be basic bodily acts. During that first meal in Les Liens, Yoshie remembers a palpable sense of relief:

We didn’t cry then and there in the bistro, but the feeling of the cells in our bodies welcoming the sudden influx of nutrients was as refreshing as crying in a speeding car with the windows rolled down, letting tears fly. Like finally sitting yourself down at your destination at the end of an exhausting journey.

Like most journeys, grief (and Moshi Moshi) has very little plot structure: there’s no easily identifiable rising action, no obvious denouement; yet simple descriptions, recounted later, may evoke the truest empathy. Eating is described in loving detail on practically every other page throughout the novel. Each space — whether it is the gastropub by the station, Les Liens, the teashop where Yoshie’s mother gets a job, or even their apartment in the mornings — possesses its own quality, an atmosphere, almost a personality: “a living thing that was continually being replenished.” This replenishment, whether of spaces or people, is at the core of the novel.

In fact, though there is a loose mystery plot around Yoshie’s father’s death (a murder/suicide pact? A lover’s quarrel gone horribly wrong? A disturbed woman – possibly an evil spirit – taking advantage of a sympathetic relative?), that plotline is intentionally set aside in favor of Yoshie’s daily acts of survival: the methodical nature of her work at Les Liens, the pleasure she takes in watching people eat, her mother’s discovery of a new life outside the limitations and expectations of her previous status as a rock musician’s wife.

The slow development of Yoshie’s romance with Shintani-kun, the manager of a music venue where Sprout used to play, takes up the bulk of the novel, but even that relationship seems less intense than Yoshie’s connection to her mother, her neighborhood, and herself. Even Yoshie’s impressions of her dates with Shintani-kun revolve around Shimokitazawa and its local restaurants:

Stepping inside [the izakaya] was like going several decades back in time. The clientele was mostly a generation or two older than us, men and women glowing from drink and rounding off their evenings with dessert. It was another place that was living proof of the diversity in Shimokitazawa, how welcoming it was to so many people. . . . The old wooden beams, the glazed ceramic dishes, and the wrinkles on the reddened faces of the customers seemed to say: Everywhere else in this country seems to tell you Go faster. So just while you’re here, take your time; hesitate; lose your nerve; give up, sometimes. Everyone has troubles and weaknesses, and you can only try so hard. You’ll be who you are. We’re all of us different from one another.

Perhaps, divorced from its context, these lines seem like a twee kind of fatalism. Yet Moshi Moshi suggests that “[giving] up, sometimes” is no tragedy, no failure: that it can be, perhaps, a necessary pause on a journey. Grief doesn’t proceed by a specific schedule; depression might come in waves, but it can’t be easily measured or tracked. Life — in all its messy, biological basics — will go on, with or without you.

Previous reviews of Yoshimoto’s work have noted her tendency towards sparse, choppy language and even sparser plots: generous reviewers call this minimalism, while more critical readers use words like “banal,” “bewildering,” or “flat” (criticism that itself seems a bit lackluster, for an immensely popular novelist whose first two books sold more than six million copies in the first five or so years after their publication). Moshi-Moshi does contain supernatural elements, dream sequences, ghosts, hauntings, a possible thriller lurking in the background — but it almost feels, at times, as if those are beside the point. The language is everyday, the plot more of a slow road back from grief. Just because the ghost of your murdered father is calling you up in your dreams doesn’t mean you can put off changing the water in the flower vases, after all.