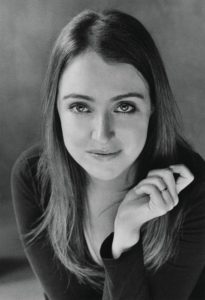 Already an insightful reader of Shakespeare in her young adulthood, and all too self-conscious about her spanking fetish, Jillian Keenan found “Shakespeare was the perfect way to circumvent cultural norms and talk about sex.” Fortunately for the reading public, Keenan has decided to continue the pattern. In her debut memoir Sex with Shakespeare, Keenan asks us to consider a variety of rich and entertaining interpretations of Shakespeare’s plays while interweaving stories about how she came to terms with her identity as a fetishist.

With the publication of Sex with Shakespeare, Keenan now serves as a very public role model of what it takes to be honest with yourself, and others, about your sexuality. As she tells me in our interview, “Sex with Shakespeare is the book I needed when I was fifteen–when I was obsessed with spanking and absolutely convinced that I was deeply, irreparably fucked up. It would have helped me a lot to discover earlier that I wasn’t alone, and that healthy, consensual relationships were still within my reach.”

Sex with Shakespeare is one of the most original books you’ll read all year. I submit that it may also be one of the bravest.

A.M. Davenport: Let’s say I’m on the fence about whether or not “Shakespeare” is William Shakespeare. How would you convince me that the Bard wasn’t, say, the Earl of Oxford?

Jillian Keenan: I wouldn’t try very hard to convince you. I’m a so-called “Stratfordian”—that is, I believe that William Shakespeare did indeed write the plays attributed to him. Many of the arguments against Shakespeare have some basis in snobbery (“he didn’t have enough schooling!” “he didn’t travel!”), which makes me bristle. And I believe in Occam’s Razor (“the simplest explanation tends to be the right one”) enough to put faith in what few facts we do have about Shakespeare’s life over conspiracy theories.

That being said, I don’t think it really matters. If it turns out the plays were written by the Earl of Oxford, I’d shrug and alert my editor that future copies of the book will have to be retitled Sex with De Vere.

That’s rather less alliterative. I imagine Sex with Shakespeare sells better than, say, Sex with De Vere would. Whoever Shakespeare was we know him to be well-acquainted with a rich bounty of puns. What are your favorite Shakespearean euphemisms for sex?

My favorite Shakespeare sex pun is the word “wit,” which was slang for genitals. Many people don’t know that, but the plays are so much more fun once you do: for example, “Ay, sir, I have a pretty wit.”

Now that you know that, read this exchange from As You Like It again:

Make the doors upon a woman’s wit, and it will out at the casement. Shut that, and ‘twill out at the keyhole. Stop that, ‘twill fly with the smoke out the chimney.

A man that had a wife with such a wit, he might say “Wit, wither wilt?”

Nay, you might keep that cheque for it, till you met your wife’s wit going to your neighbor’s bed.

Brilliant! I recall being taught that by my Shakespeare professor Adele Davidson at Kenyon. She seemed to be so unassuming and then, much as you just have for me, she’d enlighten us with these brilliant analyses of Shakespearean slang. I was the guy in class who laughed just a little too loud, but it all seemed so funny; the whole nature of the play changes when you read it with a new set of eyes! Which teachers or writers really helped you develop the readings of Shakespeare we find in Sex with Shakespeare?

While I can’t accuse any of my former teachers of peddling the relentlessly prurient readings of Shakespeare that I am so fond of, Pat Parker at Stanford University and Guy William Molnar at the Utah Shakespeare Festival are two of the teachers who influenced me the most. They both showed me that it’s okay to have fun with Shakespeare! Literature can be powerful and insightful, of course. But it can also be messy, challenging, personal, and, above all, joyful.

You and I both think that sex can often be hilarious, but your readers now know that it took years for you to truly accept yourself as a fetishist. Those were years of reflection when you truly doubted yourself. Your passion for Shakespeare helped you get through, but you also found a loving, trusting partner who’d eventually become your husband. Now that you’ve written this book (and have Dan Savage’s ringing endorsement!) how do you see yourself working for the rights of people who might feel marginalized by their sexuality?

Sex with Shakespeare is the book I needed when I was fifteen—when I was obsessed with spanking and absolutely convinced that I was deeply, irreparably fucked up. It would have helped me a lot to discover earlier that I wasn’t alone, and that healthy, consensual relationships were still within my reach. Sexuality—even non-normative sexuality—doesn’t just appear at age eighteen. And right now, there are young people out there, reading. I hope my book will give them the reassurance it would have given me at that age.

How do we have more public conversations about consent?

I don’t know! I have been saying for years that removing a child’s underwear to non-consensually access and assault their genital region is disgusting. Yet according to the most recent study I’ve seen, 70 percent of parents do exactly that. When will feminists, who often claim to care about consent, notice that childhood spankings are a seed and potent fertilizer of rape culture? Spankings teach children that it’s okay for someone with power—a parent—to do terrifying and non-consensual things to another person’s body. So we shouldn’t be surprised that many of these children grow up to become adults who still believe that it’s okay for a person with power to do terrifying and non-consensual things to another person’s body. The link is obvious to me.

How should we work to end spanking as a form of correction?

If you think about it, the idea of spanking children is odd. For centuries, children were just beaten, and parents didn’t euphemize those beatings by focusing them on a “special” body part. I understand that parents who believe in corporal punishment would counter that bottoms are “padded,” and therefore the “safest” target for physical violence. But bottoms are also extremely sexual, for cultural and biological reasons, and anyone who denies that is being willfully obtuse.

The truth is, I feel grim about the potential to solve this problem. As I wrote in the book, things change slowly, most of all minds. And children have no political or economic power to advocate for themselves. I’m doing my best to provoke cultural change (or at least conversation) about children’s rights. But I fear I may not live to see any meaningful steps forward.

Do you read comments about your book? How has it been received in online forums? While the internet gives blessings in droves, I imagine that it can be an especially cruel place, too, especially because of anonymous message boards and comment sections.

I try very hard to avoid comment sections, reviews, and blog posts about my book. But a few things do slip through. For example, just a few days ago a fetishist friend called me in tears because she had made the mistake of reading a comment section about me online. (And, of course, any attack on me is an attack on her, and our whole community.) She was devastated, and I was furious because I’m very protective of my friends.

I think it’s important to underline that it’s not just the explicit attacks that hurt us. There is a very smug, condescending undercurrent of certain people who have a passing interest in the novelty of kink and therefore feel entitled to belittle those of us who grew up suffering from the shame and stigma of an innate fetish. They say things like, “it’s not a big deal,” or “that’s not something a person needs to ‘come out,’ about.” Most fetishists find it hurtful and infuriating to be trivialized this way. There is no comparison between the experience of discovering a hobby, or even a strong preference, in adulthood, and the experience of growing up with an innate, unchosen, and lifelong paraphilia.

You’ll have to refresh my memory, but who are some of the most memorable children in Shakespeare’s plays? I can’t imagine kids had it very easy back then…

There are some very interesting kids in Shakespeare’s plays: Young Lucius in Titus Andronicus, Young Macduff in Macbeth, Lucius in Julius Caesar, Mamillius in Winter’s Tale, and others. These roles for young boys could be explained away as apprentice-like positions within the theater company—that is, roles that younger actors played before they were promoted to playing the female parts—but these child characters also share important themes. Many of them suffer extremely violent deaths! Shakespeare, it seems, did not see childhood as a time of bliss and innocence, but rather as a time of consistent and, in many cases, extreme suffering. Obviously, childhood suffering is an important political issue for me, too.

Speaking of politics, thanks to Ted Cruz, spanking has perhaps never been so much in the public light as it has been this year. What did you make of how he threatened to spank hecklers, or Hillary Clinton? And he so publicly announced that he spanks his own 12 year old daughter!

People who talk about spankings a lot are often sexually titillated by the idea–I should know. And that’s all I have to say about that.

It’s been 400 years since Shakespeare died, and we’ve seen a number of books published to commemorate the anniversary. Which of the recently published books about Shakespeare, besides your own, do you think are well worth a read?

I adored James Shapiro’s new book, The Year of Lear. Now I’m reading Andrea Mays’ The Millionaire and the Bard, which is fascinating so far.

What other books have you enjoyed reading recently?

The Oyster War, by Summer Brennan, is phenomenal. It’s a perfect example of how excellent reporting and storytelling can turn an issue that I wouldn’t normally think twice about into an absolutely riveting tale. And although it’s not out yet, I am on pins and needles for Welcome to the Goddamn Ice Cube, Blair Braverman’s memoir about moving to arctic Norway to drive sled dogs. It’s going to be huge.

A.M. Davenport is the Interviews Coeditor for Full Stop and an Editor at The Scofield.