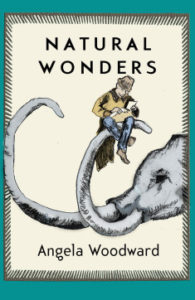 It would seem that many of the more adventurous younger women writers right now are tending toward a kind of undisguised fabulism as their chosen form of departure from conventional practice. Writers like Joanna Ruocco, Danielle Dutton, and Helen Oyeyemi create fanciful, dreamlike worlds that suggest fables and fairy tales as their apparent inspiration, although it is the ambience and mannerisms of allegorical fantasy that this fiction seeks to incorporate, not the underlying symbolic structure that allows an allegorical narrative to abstract a higher level of meaning (“the moral of the story”). In this sort of experimental fabulism, the main object of subversion is “realism” conceived as fidelity to reality in its familiar aspect, subject to the known laws of causation, and in the fiction of the neofabulists this reality is freely transformed through the unfettered exercise of imagination.

Angela Woodward belongs to this group. Her new novel, Natural Wonders, like her previous novel, End of the Fire Cult, ultimately tells a story about a rather familiar subject — the stresses, strains, and uncertainties of marriage — but does so obliquely, through sidelong suggestion, as the relationships between the characters are filtered by and mirrored in narratives not directly relating those relationships (although the narrator/editor of Natural Wonders does provide us with some specific details about the course of her marriage to the novel’s ostensible protagonist). End of The Fire Cult most purely executes this strategy, indirectly telling us the story of the decline of its twin characters’ marriage through an elaborate exchange of stories about imaginary countries each of them invents. The conflicts between the countries correspond to conflicts in the marriage, although of course this is something the reader must deduce after accepting the novel’s unorthodox conceit. In this case, it’s the possibility of allegorical content in a narrative that the author exploits, but it’s the reader who adds meaning by reading closely enough to note the parallels and underlying connections.

Natural Wonders is somewhat less allusive than End of the Fire Cult, although in it as well what the novel at first seems to be about is not finally its literal subject. We immediately encounter what seems to be an academic lecture:

Let me tell you about the age of the earth, he said. The English scientists worked together diligently and announced that the earth had been created on October 26, 4004 B.C. at nine in the morning. Out of formless mud, the sun rose and spread its light, the animals got to their feet and began wandering around the fields. Trees arched up, leaves unfolded out of their twigs and cast shadows on the meadow irises, purple flags wavering under the nostrils of curious gazelles.

In the second chapter, however, we learn that this is one of many lectures given by a professor (the narrator refers to him simply as “Jonathan”), now deceased, in his course on Earth and Prehistory. (We discover that the professor’s particular area of expertise is “jaw measurement.”) The professor’s widow, Jenny, has been asked by his department chair to put together a “definitive edition” of her husband’s lectures as a memorial. Ultimately, however, she cannot help embellishing the lectures with scenes dramatizing his classroom presentations, his students’ responses, and episodes from her late husband’s courtship of her and their subsequent marriage.

Jonathan taught primarily an undergraduate course focusing on early scientific efforts to understand the “natural wonders” of the earth. Frequently the lectures center around a prominent scientific figure such as Louis Aggasiz, at other times they focus on more obscure figures, such as the astrophysicist Milutin Milankovitch, who calculated “the exact amount of the sun’s heat that had reached the earth at any time in its long history.” The lectures are more often fairly colorful and involved stories rather than recitation of facts, as when a crew of shipwrecked Portuguese sailors are introduced to a vegetarian diet by a “tribe of wild, matted-haired men” they encounter on the coast of India. When the ship finally returns to Portugal, the crew eagerly return to eating meat, but “meat didn’t taste the same. It had about it the possibility of not eating it, its negative, like a ghost on the stairs. Regret was its horrible aftertaste.”

This lecture arises from Jonathan’s interest in eating practices (thus his specialization), but one can ask how exactly Jenny is able to reconstruct the story, along with Jonathan’s asides, his habitual manner, and the responses of his students (often puzzled, at times uncomprehending), especially when Jenny herself says “It’s not easy to be his editor” due to the lack of clarity in the notes with which she is working. Indeed, finally the novel becomes as much about Jenny’s effort to bring her husband to life through imagination (partly that manifested by Jonathan in his lectures, partly her own) than about either Jonathan himself or the subjects of his lectures. Whether the portrait that emerges has much fidelity to the “real” Jonathan — likely it doesn’t — is less important than what it tells us about Jenny’s need to give Jonathan, and perhaps their marriage, a dignity he — and it — might not have possessed. She may also be attempting to persuade herself that she had good reasons to marry him the first place (or realizing that she did not).

“We were both of us foolish, him for falling in love with me, me for not putting him off for his own good,” Jenny tells us early on, as she contemplates the attitude Jonathan’s colleagues take toward her following his death. In her own characterizations of the marriage Jenny confesses that whatever passion that might have existed at the beginning dissipated rather quickly:

. . . One morning as I left for work, he turned in to kiss my cheek, and I swerved sideways. As we both righted ourselves, our cheeks passed by each other, only a few inches apart, so that my refused intimacy nevertheless took me through the field of his heat, the smell of his scalp and shaving cream. A few months earlier, I might have inhaled with something like pleasure, or at least nostalgia for the early moments of our love affair. Now it was a relief to be just outside his orbit.

When Jenny immediately follows this fragment of memory that opens a chapter with Jonathan’s lecture on “geologic time” (“the scale of it all takes some imagination to comprehend,” she has him announce), it is evident that her mission to memorialize her husband’s work and her unavoidable reflections on a marriage that seems increasingly impalpable to her have merged into a narrative meditation on the inscrutable agency of time, the natural wonder of the ways human beings attempt to reckon with its force.

Ultimately Natural Wonders is less conceptually audacious in its formal conceit than End of the Fire Cult, and perhaps this is why eventually interest lags: the novel proves more readily assimilable to conventional expectations, even if it doesn’t really have a plot and the central relationship is “developed” only in the most implied and indirect manner. Readers who prefer fiction that is “about” something and invites emotional engagement would not be disappointed with Natural Wonders, although they must be willing to read more actively and imaginatively than a typically “immersive” novel might ask. This novel could without serious distortion be called a love story, albeit more about the natural wonder of its absence than its presence. Still, attentive readers sympathetic to inventive writers seeking fresh formal expression of the common human experiences to which fiction unavoidably returns should find it an uncommonly adept achievement.