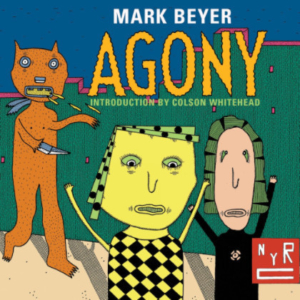 The exquisite color-washed pages of Alison Bechdel’s Fun Home are adapted on the stage and the dynamic stylized panels of Marvel’s comics now grace both the small and silver screen, but Mark Beyer’s comics stand apart as both deliberately strange and delightfully macabre. In the late ’70s, having gotten the attention of the great comics legend Art Spiegelman (author of Maus) Beyer began publishing art in underground and alternative comics anthologies like Arcade and Raw, which printed some of the strangest, most envelope-pushing comics created at that time(Spiegelman’s Maus was serialized in Raw in insert form). Beyer’s comics, with their nightmarish scenarios and bizarre figures, gathered a cult following and resulted in the publications of several books, including: A Disturbing Evening (1978), Dead Stories (1982), and Agony (1987), reissued in 2016 as the first selection of the New York Review of Comics, a new imprint of the New York Review of Books. This reissue introduces Beyer’s Agony to a new generation of readers, bringing its bleak worldview into the 21st Century — where, as it happens, it’s perfectly at home. Indeed, as I read Agony, I increasingly felt that it could’ve been written in the last years, in response to more recent problems like the housing crisis, (increased reports of) police brutality, and the Fukushima meltdown (Amy and Jordan, Agony‘s protagonists, are survivors of an unexplained explosion like a nuclear disaster that results in all Amy’s skin falling off, which then leads them to an apartment that they can’t afford because of their exorbitant medical expenses, which then lands them in jail, where a prison guard beats Amy half to death). Agony‘s seemingly far-fetched plotlines read even more like a critique of modern society now than they did when the book was first published.

Take for example page five of the comic, which depicts a scene from a fictional film, Killer. In it the titular killer stabs a woman wearing only a bra and underwear. This woman lays on the carpet of her home, her arms flung awkwardly outward, as her killer plunges a knife into her left breast. Given the woman’s attire, it’s possible that this killer was also a lover, or else someone who knew her intimately enough to lean over her like this with his figure cutting a sharp diagonal across the center of the panel. In turning the page, this diagonal superimposes onto a hideous ghoul creature that wraps its monstrous hands around Amy’s neck and tears off her head, which it then carries to an aquarium and places in a tank, where it’s eaten by a fish. Here I should say that Beyer uses the characters of Amy and Jordan like punching bags, putting them through the most horrific ordeals imaginable without regard to the laws of physics or anatomy (Amy’s head, upon being recovered, is reattached to her body without any difficulty — as are Jordan’s legs, which were bitten off when he attempted to save Amy). This brutal treatment would seem gratuitous were it not for this exact overlap between the killer in a film and the ghoul in “reality” as Beyer depicts it. By drawing this parallel between real-life monsters and the horrors seen in pop culture, Beyer suggests that our modern agony stems in some part from our fascination with and our fundamental dependence on media. News outlets in particular. When Amy and Jordan travel to Gotnak Island (the location of that unexplained explosion), it’s because of an article in a magazine. When they decide to keep living despite Amy’s lack of skin and their many troubles, it’s in response to (what seems to be) a front-page article about a deadly scramble Amy caused when she threw seven thousand dollars in cash out the window (she and Jordan had been awarded $50,000 in honor of their “humanitarian” efforts on Gotnak Island and Amy felt so bad about it that she got rid of the money — after paying off her medical bills, of course). Their impulsive reactions to outside stimuli characterize modern life as a series of agonies that we don’t overcome so much as survive.

Beyer’s mistreatment of his characters would be impossible if they were complicated, fleshed-out people with nuanced reactions or real psychological depth. When Jordan faces adversity, his only response is a persistent optimism typified in his use of platitudes such as, “We’ve just got to keep trying harder. It’s a struggle, but what else can we do?” In this worldview, life isn’t about choices, but is instead one long uphill battle where what keeps you going isn’t the hope of a better life, but rather the rolling energy of inertia. Death isn’t an option for him, which explains why, when Amy attempts to kill herself by stepping into a bathtub full of sulfuric acid, Jordan swiftly pulls her out despite her having already dissolved her leg (this after she’d lost all her skin in the explosion). To many readers, this dogged insistence on living will seem ridiculous and even absurd, but the utter lack of sagacity proves essential to their story: without pausing for reflection, the narrative is free to keep building up its momentum, driving itself into ever more unbelievable and insurmountable problems, until finally Beyer resorts to a deus ex machina salvation in the form of a giant winged creature — leader of a tribe of fantastical animals — that swoops out of the sky and drops Amy and Jordan into an apartment where the rent has been paid ahead in full for twelve months. In another comic, none of these events would be possible, because the principal characters would be bogged down in their feelings, processing their reactions to various stimuli in exacting, dramatic detail. 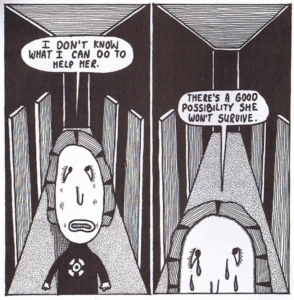 This complete lack of interiority paradoxically provides our best entryway into understanding the characters and thus the comic as a whole. Without thinking about it, Amy and Jordan become the symbols of trauma and persistence, respectively, and being symbols function like ciphers. Their struggles are our struggles, magnified for searing and comedic effect, so their knee-jerk reactions seem simultaneously like a way to highlight painful experiences and the only logical response to their circumstances. Devoid of any real faculties of perception, and susceptible to influence from the outside world, their lives then become wrapped up in the facts of their situation: their health, their location, even their first, foolish responses to stimuli. When anything happens, one of them summarizes the experience, so that every panel becomes a miniature story with its own plot and its own logic. “They’ve taken us to their village,” Amy explains when the natives of Gotnak Island capture them. “I’m turning into a human skeleton!” she cries when her flesh starts falling off. If you were to strip that panel of its word bubble, you would still be able to understand what was happening, and, indeed, if you were to do the same thing throughout the book there would only be a few instances where the plot was too obscure to be deciphered from the image alone (for example, when Amy boards a bus headed for her aunt’s house in the country while recuperating from her beating at the hands of that prison guard). It’s as if their characters have no background (no past) and now exist only in the agony of the present moment.

There’s a certain comfort to be found in this agony. In the introduction to the new NYRC reissue, Colson Whitehead writes of gifting a copy of Agony to a friend in the hospital, thinking that Amy and Jordon’s suffering would cheer him up by comparison. His friend unsurprisingly didn’t find it uplifting, given this extended hospital stay, but Whitehead continued to find solace in Agony, and went so far as to Xerox some of his favorite panels and tape them over his desk. “I’m turning into a human skeleton!” was particularly resonant and touches on what I think to be Agony‘s universal appeal: its sublimation of complex and painful moments into mere statements of fact, taking their pain and complexity and making them simple, digestible, like a pill that’s taken once then swiftly forgotten. Once the present moment has been acknowledged, Amy’s transformation into a human skeleton is complete. In the next panel, she’s in bed, having already accepted what’s she’s become and moved on to her next problem. This particular pain is only temporary, the comic implies, and if we sometimes feel, as Colson Whitehead does, like a human skeleton, then we can rest assured that this too shall pass and that the resonant pang we feel in reading certain panels stems from the memory and the recognition of a sentiment or situation one has experienced and survived and not from our permanent state of being. Life is impermanent, Beyer insists. It’s fleeting. Agony will of course persist, but in between panels, in those moments after pain has hit, there’s still some relief, and even, in some cases, joy. When I read Agony, I found the most poignant panel was the one in which Amy, meeting a sea creature, kindly offers it peanuts from the palm of her hand. In almost any other panel, this would be a disaster, but for once in this comic, something doesn’t go wrong, and though she may be feeding a monster Amy has a moment of innocent, innocuous pleasure. If we just wait a moment, we’re told, this pleasure will pass, and we’ll feel something new.

Ruth Joffre is a writer and a critic whose work has appeared or is forthcoming in Kenyon Review, Hayden’s Ferry Review, Mid-American Review, The New York Observer, and Full Stop, among others. She’s a graduate of the Iowa Writers’ Workshop and currently lives in Seattle, where she teaches at the Hugo House.

The Other History of the DC Universe – John Ridley

Adrenochrome Supplements for the Postmodern Condition