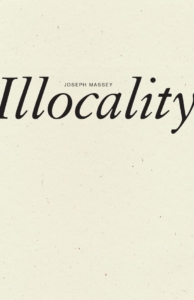 It’s difficult to make positive assertions about poetry or poets: interpretations are endless; meaning is encoded. But you could say this about the work of Massachusetts-based Joseph Massey: his poems are like distilled water, as pure as poems can be without being simplistic. Poetry is sometimes considered a member’s only club, but Massey’s poetry offers an open invitation to look at the landscape, to see what is seeable as well as the invisible “seams” connecting horizon to water, water to shore.

Julienne Isaacs: I find myself growing still when I read your work: there’s almost a dividing line between the moment just before I enter the poem, when I am caught in the jangle of my thoughts, and the moment I’ve entered the poem’s microcosm, its climate. Your poems remind me of mindfulness practice: they carry this heightened attention to the moment. A line from “Microclimate(s)” in To Keep Time reads “To stop looking / as if looking / were a way out.” Do you experience the same effect writing the poems as I do reading them — do they offer you a way of looking to stay, rather than looking to leave?

Joseph Massey: My poems begin in notebooks and most of their images are composed as I experience them directly. I take my notebooks out for walks, jotting down impressions as they appear, or, as is often the case, disappear. The idea is that what’s experienced with my senses will somehow translate into language that comes close (never close enough!) to creating — primarily through the sound of the words, each syllable as it accumulates — a reflection of whatever I’m witnessing. This doesn’t only apply to the natural world and concrete images, but also to the process — the kinetics — of thought itself. The rhythms of cognition interest me as much as any object or series of objects in space; the latter doesn’t exist without the former, and that interplay is where so much of the poetry happens for me. How do we apprehend a world; how does a world apprehend us.

I think the work, when it’s working, offers equal potential for both leaving and staying. There’s a vacillation. You can hold to the sound of the language while being picked up and carried into the visualization of a particular image — all at once. I want the range of experience to be dynamic.

In all three of the books written in or to Humboldt County, California, you repeatedly link the idea of “speaking” with the landscape. The landscape offers its own language (“names / unfold the field”, you write in To Keep Time’s “An Undisclosed Location in Northern California”; “Line by line / the landscape’s / defined / and revised”, you write in At the Point’s “Degrees”). Do you see your poems as a response to landscape, or as “given” from the landscape itself?

Both. When I’m writing within a particular landscape I like to think of it as a conversation, a correspondence, but I’m mostly just listening. The vocabulary is all right there — I think we live within language, not the other way around — and I use the poem as means to hone in, to hear what’s being given to me, with the hope that something of the original impulse remains after the poem has been worked over however many times. Maybe it’s an act of translation more than anything else.

The landscape in your books is not all water and sky, hills and tree lines — there’s a disciplined unsentimentality in how you also attend to strip-malls, rusted debris, litter and bird shit. What draws your eye to these “flaws” in the picture? Do you see them as flaws?

As far as the poem is concerned, those instances of man-made debris and other forms of animal waste are just as valuable, possess just as much weight, as anything that might be considered a conventionally beautiful thing. I don’t moralize in my work, at least I try not to.

Personally, the trash and the shit are simply just attractive to me. I’ve seen splotches of bird shit on the sidewalk that move me as much as any Robert Motherwell painting. I can’t help admiring a bright white splash against a darker background, how it defies figurativism. If there’s such a thing as pure abstraction, which I am sure there isn’t, the seams between the natural and unnatural are where it might be found.

In all of your work, but particularly in To Keep Time, there’s a phenomenological immediacy to your observations of the natural world. To come back to the first poem in the sequence “An Undisclosed Location in Northern California,” there is no barrier between the speaker and the first “thick / morning thinned to a / pitch of sun.” But even if meaning runs brightly between the observer and the landscape, not all is revealed or understood (“you’re either lost / or lost. A wordless- / ness written / into the dirt writes / itself around you”). To you, what is knowable about the landscapes you observe?

The only thing knowable about any landscape is its mutability. While there are always placeholders — tree, mountain, shrub, hill, house, dumpster, whatever — to locate you, the context — time of day, the weather, people or lack thereof — is always shifting and morphing into something else, and so even the assumed stability of those referents is essentially obliterated.

Many of your poems address the speaker’s inability to speak. In the first short poem in the sequence “From a Window” in At the Point, the speaker reaches past “the bone / of a stutter” for words “to somehow say / what wants to be said.” There seems to be this juxtaposition in your work of assertive, positive statements (“Low clouds shear the hills in half”) with articulated speechlessness (“What I want to say / I can’t see to say / I can’t see to say it”). Does this kind of wordlessness draw attention to itself or to the landscape that defies description? What makes you speechless?

Language itself is as mutable as any landscape. I’m in awe of that quality, the fluidity of “meaning.”

I love the feeling of having something to say, welling up with the possibility of an utterance, only to find myself dumbstruck; I often write from that condition.

And absence — the spaces between objects, the pauses between statements — is significant in these poems, too.

Those gaps are so generative for my poetry — “to sing the seams,” as I put it in a poem in Illocality.

Your books tend to progress through the seasons. Is this how you work? What I mean is, do you write winter poems in the winter, or later? Do you write your way through difficult “false springs” and into summer? Or can you access the particularities of the seasons from a distance?

I don’t pluck images from memory; I write down what I’m directly experiencing, usually. And I arrange the books more or less chronologically — since I write so much about the weather, etc., they inevitably track through the seasons.

You are extremely prolific — you’ve published three books and 13 chapbooks, with another full-length collection due this fall. Are your writing patterns fairly consistent? Have you had bouts of “speechlessness”?

I’ll rarely go more than a month without writing a poem. Poetry has been a daily part of my life since I was very young, as a way to see and to process my internal and external environment; I can’t imagine a life without it.

This fall’s collection — Illocality — will be the first of your books that isn’t “set” in Humboldt County. Are some of the poems in the collection set in Massachusetts, where you live now? Or are they — as the name suggests — dislocated from a particular setting?

All of the work in Illocality was written during my first year in Massachusetts. The book is a “graph of the mind moving” (I love that Philip Whalen quote) through a new landscape, climate, almost an entirely other world compared to the coast of Humboldt County, California, where I lived and wrote for twelve years prior to moving here.

My sense of “illocality” was strong as I attempted — and I’m still making the attempt — to adjust to this place, but it’s been a relatively painless process. The Pioneer Valley is beautiful and having four seasons again has been useful to the work.

By the way, I stumbled on the word “illocality” while sitting alone in Emily Dickinson’s bedroom (thanks to the Emily Dickinson Museum for the opportunity). I randomly opened a copy of her Complete Poems and landed on #963:

Julienne Isaacs is a writer, reviewer and editor based in Winnipeg, Manitoba. Her work has been published in The Winnipeg Free Press, The Winnipeg Review, The Globe & Mail, Contemporary Verse 2 (CV2) magazine, Whether magazine, The Rusty Toque, FreeFall magazine, Geez magazine, and other bastions of culture. She is a staff writer for the Town Crier, an arms-length appendage of The Puritanmagazine, and books editor for Rhubarb magazine.