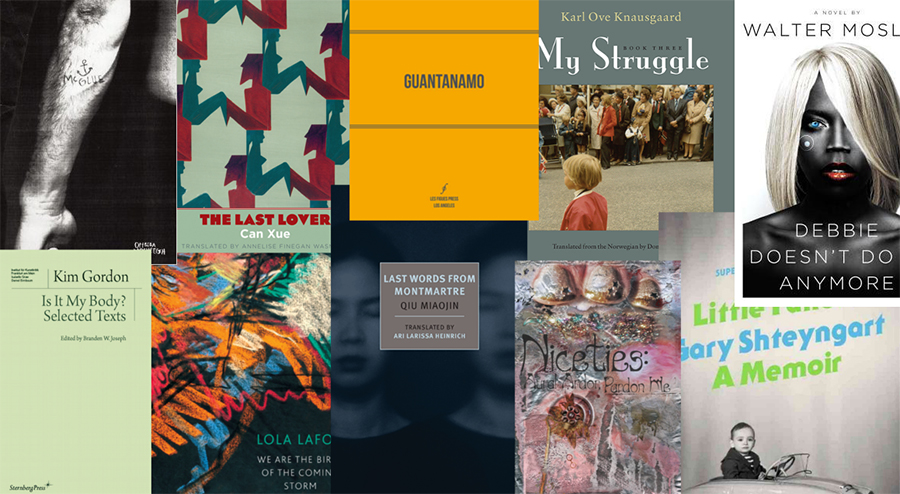 This year, stories hit us deep. Full Stop’s reviews section was packed with accounts of books imbibed on a severely personal level, the process of consuming, stewing, and analyzing going far beyond mere aesthetic detachment and instead rippling out in grand waves within the readers’ lives. From collections of essays to daring fiction, thinly-veiled romans à clef and confessional memoir, our reviewers didn’t just read. They experienced. Full Stop’s reviews strive to fully understand the mechanics of a book’s vital organs, whether they’re found wanting or winning, and in the process of excavating, intuiting, and examining, these reviewers lay themselves out on the operating table as well.

Reviewers cannot live on books alone. That so many smart, funny, talented writers are willing to contribute their time and effort to making Full Stop’s reviews section one of the few spaces on the web devoted to the sustained engagement with contemporary literature and its meaning in our world today — literature from accepted greats in need of renewed analysis, but especially from small presses, from young writers, from other languages — makes us incredibly lucky. But we would love to be able to compensate our reviewers with more than just love.

Years ago, we pledged to not pay ourselves until we’re able to pay for every piece on the site. We have kept that promise, even if we haven’t yet realized our goal. Now, for the first time in its four years in existence, Full Stop is asking its readers to help us get there. Below, we’ve compiled a selection of some of our favorite reviews published on Full Stop this year. If these accounts of readers reading feel important, exciting, even necessary, the kind of writing you’d like to continue to see, consider donating by following the link below.

The Last Lover — Can Xue

Hour one: I sit in a coffee shop with a paperback copy and a cup of ginger tea. The prose is dense, peculiar. The characters are given to sudden declarations.

Hour two: I am astonished to realize that I have only read less than fifty pages.

Hour three: My head hurts. I feel like I have been translating. I have stopped tweeting.

Hour four: I succumb to the book.

It may sound a little churlish on my part to blame Knausgaard for upstaging everyone in what is, by design, a one-man show, but I kept thinking of Proust, and if maybe Knausgaard didn’t draw the wrong lesson from him.

Ottessa Moshfegh’s debut novel seems to use a classic plot driver: Johnson’s dead, McGlue stands accused. Does McGlue set about straightening the record? What record? Locked in the hole, McGlue is very hazy about what’s happened to him recently — only Johnson and McGlue go back much further than that. His shipmates insist: he killed his best friend. McGlue takes some of the air out of the Kafkaesqueness by appearing not to care either way. McGlue wants to be brought one thing, and that’s booze: will you go get him some?

We Are the Birds of the Coming Storm — Lola Lafon

I had a hard time figuring out, as a man, how to write about the experiences of the women in this book in the traditionally detached, authoritarian tenor of the book reviewer. What is the best way to write about a text that implicates its reader — particularly, in this case, the cis-gender male reader — in the problems that it presents? How to write about a book that opposes so deeply, clearly, and convincingly the dominant vocabulary that I have used in the past to think and write about sexualized violence, a vocabulary that is so tied to my subject position and privilege as a cis-gender male?

These were the thoughts that pushed and pulled at me as I tried and tried to write this review.

Lists fall into meter: flat-butted, spank-skinned, little-hipped, pimpled. It is this kind of move that might make someone classify the work as prose poetry, if such distinctions still mattered. My friend and I read the title out loud to each other many times, checking to see if it is in iambic pentameter. Niceties: AURal ARdor PARdon ME. We’re not sure how to scan Niceties, if it is dactylic or pyrrhic. NIceties (Stressed, unstressed, unstressed). NIceTIES (Stressed, unstressed, stressed).

It it My Body? — Kim Gordon

With Gordon’s well-known context as Riot Grrl heroine eschewed by this collection in favour of the history of conceptual art, and no word from her on the collection itself, Sternberg Press’s publication inadvertently strands Gordon in the more conservative mainstream position her fame has placed her in. Enshrined here in art’s institutional canon she is divorced from her DIY and No Wave subcultural roots and her texts suffer as a result.

As one pores over Guantanamo’s transcripts, what makes them so heart-hollowing is the way they show how in a sea of linguistic uncertainty, the locus of meaning, that original word, is more often than not established solely through force. To call a detainee an “enemy combatant” is a project loaded with bottomless ontological implications. But when the CSRT invokes their source for indisputable and infallible evidence, they appeal to a list, a non-descript handbook authored by a faceless, bureaucratic unmoved mover.

The obsessive speculation that often surrounds a young artist’s death at their own hand can often function to obscure the work left behind with romanticizing hagiography. In Qiu’s case, however, it’s necessary to attempt to understand the web of intention that binds what she wrote with the way she died.

Though he has several other experimental works to his credit, the hardboiled inflection defines the prison walls Mosley chooses to inhabit for this attempt. Or do the economics of the book industry, the contract on this particular project, prohibit him from saying more? We can only infer the excess indignation curbed by the author’s sensible ear. “The hardboiled condition is when a man or a woman, or an entire nation of women and men,” says Mosley, “is pressed to physical, emotional, economic, or intellectual limits — past, present and for the foreseeable future.” Debbie’s rut is Mosley’s trough. And their language of shared frustrations holds a world that is all too familiar to the rest of us.

The 100 Best Books of the Decade