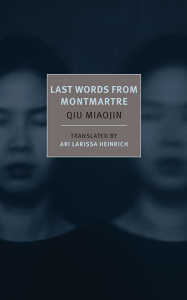 Towards the end of Taiwanese author Qiu Miaojin’s Last Words from Montmartre, the unraveling narrator of this emotionally overflowing epistolary novel writes, “I still haven’t given you a home! I’ve been working so, so hard on it, did you know that?”

The “you” she addresses is ambiguous; it is her lover who has left her, it is herself as her consciousness fractures into pieces. Her inability to construct a home reflects the instability of the narrative at this late stage in the novel. After pages and pages of letters exploring the possibility of loving purely and permanently, the nature of desire and sex, the complex experience of gender between genders, the capacity of art to encompass and heighten human experience, the narrative comes unpegged, spiraling out of coherence, the “I’s” and “you’s” all mixed up. The narrator addresses an ambiguous figure, Zoe, who gains shape as Qiu loses track of herself. The novel takes on such a pitch of intensity that it seems to propel itself towards its terrible conclusion with an energy and inevitability all its own, culminating in Qiu’s actual suicide at the age of 26, soon after completing the book.

An icon for lesbian and queer culture in Taiwan since the publication of her first novel, Notes of a Crocodile, in 1994, Qiu Miaojin gained legendary status beyond these circles after her death in 1995, her work now widely beloved, taught in schools in Taiwan and the subject of many university theses.

Her suicide is, of course, a subject of great collective interest. The obsessive speculation that often surrounds a young artist’s death at their own hand can often function to obscure the work left behind with romanticizing hagiography. In Qiu’s case, however, it’s necessary to attempt to understand the web of intention that binds what she wrote with the way she died. Last Words from Montmartre, composed of letters mostly addressed to a lost love in the immediate aftermath of a relationship’s dissolution, but also occasionally to other friends and lovers of the narrator, is inextricably intertwined with Qiu’s suicide. The New York Review of Books edition, which presents Last Words from Montmartre for the first time in English, includes a helpful afterword by translator Ari Larissa Heinrich, in which Heinrich situates Qiu’s work culturally and historically, emphasizing the particularity of suicide’s associated cultural meanings in East Asia. Heinrich writes, “In the end we should try to understand Qiu’s death as she wanted it to be understood: as a kind of speech act, as the ultimate means of sealing the connection between art and life.”

While Last Words from Montmartre can at times read as an outpouring of undirected and incoherent desire, so powerful as to become all consuming and blinding, it would be wrong to take it as the document of an emotional breakdown. The careful artistic intention at the heart of the novel is apparent on every page. She presents her goals with deceptive modesty, writing, “It won’t be a great work of art, but it could be a book of true purity; the detailed, thorough excavation of one very small field of a young person’s life.” And indeed the novel becomes a mechanism for fusing life and art together, in no way a small undertaking.

“In this life what I really want to become is an artist like Angelopoulos — to become a ‘shaman,’” she writes, referring to her favorite film director Theodoros Angelopoulos. She wants, in other words, to harness the animating power of fiction. The novel is then a performance of all consuming passion given shape by the artifice of fiction but remaining very real in the life of the author. Qiu writes, “One can talk endlessly about the sorrows of life, but only art can express it precisely . . .” And this is Qiu’s ambition: to access pure emotion and pure love. Writing is the means through which it becomes possible to do this.

Although predicated on exchange, epistolary novels are often one-sided, an outpouring of feeling and thought directed towards an imagined or non-responsive recipient. In The Color Purple, Celie writes to an unanswering God, in I Love Dick, the titular Dick has no response for the volume and fervor of Chris Kraus’ letters to him. From The Sorrows of Young Werther, to Jacques Derrida’s fever dream of wandering pronouns The Postcard, to C.S. Lewis’ demonic philosophical fantasy The Screwtape Letters, one-sided epistolary works abound, and it becomes clear that a narrative structure that inherently implies give and take actually operates to facilitate something very different. While “you” might not respond, the fact of choosing some “you,” and directing thoughts towards that chosen recipient opens the gates for emotional and narrative experimentation, as well as for a complicated and evolving relationship between the author and the “I” of a novel.

For Qiu, what is being explored is not so much these positions of “you,” and “I,” but the potential to turn the novel into a vessel for pure emotion. The dyadic space opens up a channel for that feeling. As she writes, the letters outgrow their purpose as means of communication to a specific individual: “It now expresses more than what I’d wanted to convey to you; it has grown denser, more beautiful, and you won’t be able to appreciate its whole value until I’ve finished writing it.” The result is the eventual destruction of Qiu’s narrating consciousness, her construction of self, and then of her actual, bodily self.

Qiu writes, “I could only imagine living for her because only her existence truly needed me, needed my existence to live,” and then later, “. . . the instant our journey overlapped and influenced the other, my fragile personality exploded and my individual self, caught between heaven and earth, was soundlessly, breathlessly sacrificed. This is merely called Nature.” In Last Words from Montmartre, selves and emotions hurtle through time and space with terrifying force — both destructive and productive — and ecstasy and pain exist in very close proximity.