A Girl is a Half-Formed Thing – Eimear McBride 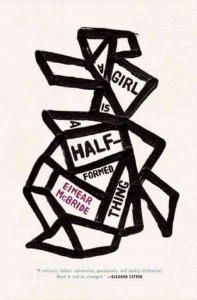 Contemporary fiction has so thoroughly returned to observing convention in prose style and storytelling that a novel imitating less conventional strategies used by writers a hundred years ago is hailed as “radical.” This is the only explanation I can understand for the rapturous reception accorded Eimear McBride’s A Girl is a Half-Formed Thing when it was published in Ireland and the U.K. In many ways this is a perfectly good novel that to a degree does challenge complacent reading habits, but it hardly seems necessary in order to acknowledge its achievement to declare it a daring experiment (“experimental” was a word used frequently by reviewers), nor to assert it is “a book that is not like any other,” as one reviewer put it. Such hyperbole does the book a disservice, setting up exalted expectations it can’t meet and ultimately obscuring the very influences the reader should be familiar with to really appreciate what McBride has attempted.

To judge by the kind of fiction that receives serious attention in the most prominent review spaces, it would seem that the era in contemporary fiction in which formally and stylistically adventurous writers genuinely challenged the preeminence of social and psychological realism not only has passed, but that it was some kind of aberration with little lasting influence, as writers get back to “normal” fiction. Although a few surviving writers associated with this era such as Thomas Pynchon and Don DeLillo still receive considerable attention, this comes at a time when arguably their work has itself become more conventional, even repetitive, and thus easier to accommodate to a change in critical taste that otherwise can regard their earlier work as “classic” postmodernism belonging safely to the past. Younger writers who might be considered experimental or innovative — that is, truly experimental, not simply retooling previous innovative strategies to make them more reader-friendly — are routinely ignored in mainstream book reviews except when their books might have cautionary value as freakish exercises of a kind real writers would do best to avoid.

Certainly upon beginning A Girl is a Half-Formed Thing, readers will not find the usual sort of expository prose recent literary fiction has conditioned us to expect. However, only readers unfamiliar with the work of Joyce, Woolf, or Proust could conclude that these initial pages introduce an unprecedented, revelatory technique:

Walking up corridors up the stairs. Are you alright? Will you sit, he says. No. I want, she says. I want to see my son. Smell of dettol through her skin. Mops diamond floor tiles all as strong. All the burn your eyes out if you had some. Her heart going pat. Going dum dum dum.

This is, of course, a variant of the “stream-of-consciousness” strategy as practiced by such writers as Joyce and Dorothy Richardson, itself the most radical development of the modernist pursuit of psychological realism. The move toward probing interior states found in the fiction of Woolf or Henry James is what initially makes modernist fiction seem “difficult,” although later versions of modernism did go beyond what is now called “free indirect discourse” in exploring alternatives to conventional storytelling.

Storytelling in A Girl is a Half-Formed Thing is done entirely through the use of the stream-of consciousness method as we are plunged “deep” into the mind of its protagonist, who is depicted from her childhood to college, a period bracketed by the trauma of her brother’s early brain cancer and the trauma of its return and his subsequent death. In between, the protagonist undergoes other traumas, most horribly sexual abuse by her uncle. While the protagonist’s experiences are not related to us in a typically dramatic way through conventional prose, nevertheless the novel’s unorthodox narrative strategy gets the story told rather efficiently, as the reader becomes accustomed soon enough to the psychological shorthand that is the essence of stream-of-consciousness style.

That McBride skillfully uses this style to relate her disturbing but ultimately somewhat familiar story of the maturation and sexual experiences of a young girl, albeit in this case inflected by the depiction of familial abuse, is the best measure of the novel’s success, but this hardly makes McBride’s use of the style in the first place an act of originality or daring. Perhaps we can say she uses it skillfully enough that it produces effects that would not have been possible with a more conventional style of narration, including a more conventional mode of free indirect discourse. Perhaps we can say that the use of stream-of-consciousness in this novel does create a kind of intimacy with the young protagonist, whose reactions to her often harrowing experiences are recorded with a particularly affecting immediacy. In this way, it is a novel whose “content” can be realized only through this particular narrative strategy, and the kind of language the strategy requires. But does it really diminish the novel’s actual accomplishment to characterize it as an adroit adaptation of an already existing technique to create an aesthetically satisfying work of fiction rather than exaggerate or mislead by describing it as an innovation?

If the prose style we encounter in A Girl is a Half-Formed Thing is initially resistant to our usual expectations, it acquires its own kind of clarity in advancing the narrative:

The beginning of teens us. Thirteen me fifteen sixteen you. Wave and wave of it hormone over. Like hot flush cold splash down my neck. Spilt with new thoughts, troublesome that is and things that always must be said. Spill it out. Spill it down.

Where’s that father? Mine? Who belonged to was part of me? I think of. Where is he? Imagination of fathers sitting by me on the bed. Stroking my hair you’re my girl, belong to me pet. I have heard of seen those things somewhere on the telly. And I say will you ever tell me what he said about daughters before I was born?

The purpose of these paragraphs in marking the passage of time is fully clear, as is the description of the travails of adolescence. If “hot flush cold splash” seems motivated more for the effect of verbal modulation (hot/cold, flush/splash) than for its accurate rendering of a young girl’s consciousness, nonetheless the effect of this passage is to create an alternative cadence that carries the reader along as effectively as ordinary expository prose, and works to build an empathy with the character that goes beyond either straightforward 3rd- or 1st-person narration in its evocation of her longing for her absent father. Only a reader who refuses to consider alternatives at all to the usual expectations could continue to find McBride’s approach difficult or confusing.

The “you” addressed by the girl throughout the novel is her brother, which on the one hand brings additional unity to the narrative mode McBride has chosen, but also introduces a complicating factor in considering the conceptual integrity of A Girl is a Half-Formed Thing. The suggestion that she is in some sense talking to her dead brother raises the possibility that what often seems like an extemporaneous, fragmentary account of the girl’s immediate experience is actually her own retrospective narration of her past, an act of memory. But if she is indeed recalling her past, then the stream-of-consciousness effect is muted, if not negated altogether. What we have instead is a transmogrified 1st-person narrative that seems to mimic the stream-of-consciousness technique, but whose rationale remains unclear. It is implausible that she would be in the process of remembering her entire life story, and even if she were, would she really be doing so in this kind of broken discourse, which is ultimately just as artificial, just as “literary,” as any other stylistic device? From this perspective, the narrative is not related through stream-of-consciousness at all but directly by the protagonist, in a fashion that finally could seem improbably contrived.

No doubt most readers will simply accept McBride’s narrative strategy as giving us access to the narrator/protagonist’s way of internally processing events, even if that strategy is logically incoherent. Indeed, if A Girl is a Half-Formed Thing ultimately provides a compelling reading experience and the impression of authenticity in its portrayal of its main character’s difficult young life, do the technical features of its storytelling really even matter? Perhaps not, but neither should a novel that simply recasts what was at one time a truly radical departure from the literary norm as a variation on a familiar practice be regarded as an artistic breakthrough. This is an adept enough novel on its own terms that it shouldn’t be represented in other, unsuitable terms that distort both the novel and the literary history to which it properly belongs.