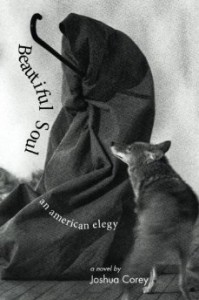 If we would expect a novel written by an accomplished poet to exhibit a gift for language beyond what we find in most fiction, then Joshua Corey’s Beautiful Soul certainly meets our expectations. Indeed, this gift is apparent literally from the novel’s beginning:

Black screen. A flicker. The letter:

In the heart of the night the new reader lies awake with the lights turned off listening to the rain tapping on the skylight. If she opened her eyes she would see the darkness above her, a rectangle gradually reorganizing itself into a gray filmy gleam, glassy surface blistered by streetlamps, and the little shudders of water whose shadows she can feel moving across the bedspread, her husband’s sleeping body, her own face, Like hieroglyphs or Hebrew letters they form and squiggle and dissolve almost tangibly before her closed eyes. The letters are falling on her roof and the roofs of her neighbors: they fall invisibly into Lake Michigan, that vast unplacid text, and coat metal and glass and asphalt from Waukegan down to the Indiana border. Others too are awake reading the weather, establishing degrees of correspondence between internal and external states of being, between the past and the present, what they expect from the day and what they are capable of anticipating.

This passage is precise and evocative without being overtly “poetic.” The figurative language is concise rather than elaborate (“blistered by streetlamps,” “vast unplacid text”), and does not obviously solicit the reader to respond to it as “fine writing.” In fact, Corey’s prose style throughout the novel does not employ its linguistic transformations and other syntactical devices as a kind of aesthetic ornamentation, of the sort we find too often in much “literary fiction.” Instead, language as transformation and illumination is inherent to the conception of prose at work in Beautiful Soul. There is narrative in this novel, but its verbal resources are not primarily dedicated to “telling the story” in the functional way most novels do, even those that seem more character than plot-driven or that are noted for their stylistic flourishes. (Which is not to say that Beautiful Soul is lacking in storytelling — the account of events relating to the Paris student riots in 1968, for example, is especially compelling.) Corey’s prose registers the sensations, perceptions, and experiences of the novel’s characters — primarily the protagonist — in truly the only way such characters actually come to life: they live in language, and to that end the writing in Beautiful Soul, in its scrupulous attention to phrase and image in almost every sentence, could be called an attempt to bring the characters and their milieu to life through the vigor of the words on the page.

If this kind of commitment to the generative power of language is part of what might lead us to consider Beautiful Soul a “poet’s novel,” we also find a keen attentiveness not just to the discrete phrase and the isolated trope but to the shape and rhythm of sentences, as well as the use of these sentences to form paragraphs that both provide narrative continuity and work as stylistic elements on their own. Corey’s sentences can be quite long, but they should be entirely accessible to readers who don’t always expect the “shapely” sentence, in which every part of the sentence (especially in longer sentences) is duly subordinated to a unifying, underlying thought, by which in turn the sentence is judged as a felicitous expression. Rather, Corey’s sentences seem to unspool or expand, through successive clauses and phrases much more loosely connected:

Our man Lamb leans forward with an appearance of desultory curiosity and speaks again in his flat American accent, the newscaster’s accent of imperial nowhere, clear and intelligible enough to bind us to him incrementally further, to further our investment in him, a narrow middle question mark of a man whose subjectivity, we understand, is to be viewed transparently by us and for us, as we might see a stranger approach the window of a café where we sit writing or talking and step across the invisible barrier to press his forehead against the window, shading his eyes, searching as if for us, and we stop our fingers on the keyboard, we stop the cup from reaching our lips, we half stop our breathing waiting for him to move toward the door, to become a destiny, a man in a long coat and a colorless expression, or else to drift past, to rejoin the long crazy stream of humanity past the intelligible, the acceptable, the corporate comfort of numbers in the darkened theater.

The internal rhythm manifest in sentences such as this is reinforced by their frequent modulation into much shorter sentences. All of Corey’s sentences work to move us “incrementally further” in apprehending the fictional world they are in the process of creating, as well as the characters in their own process of negotiating it. These sentences also incrementally develop often equally long paragraphs, whose length is determined not by the amount of information they contain or their role as links in a narrative chain (which usually require shorter rather than longer paragraphs) but by their capacity to accumulate the sentences in such a way that they are allowed their discursive freedom, the paragraphs also incorporating them into a larger structure that creates its own rhetorical and aesthetic effects, requiring us to read more deliberately, to appreciate the paragraphs as a formal element with aesthetic appeal, not just as the components used to construct a narrative in prose.

If Corey’s ability as poet is evident enough in the way he organizes language at the point where “writing” most fundamentally occurs, in the composition of sentences and paragraphs, one might still ask whether Corey shows equal concern for the broader formal design of his novel, in relation to the existing formal conventions of fiction. Certainly Beautiful Soul is not an entirely conventional narrative, although the novel could be described as primarily a character study using a central consciousness mode of narration (what is currently most commonly called “free indirect discourse”) that focuses our attention on the inner turmoil the protagonist, Ruth, is experiencing as she takes on the responsibilities of motherhood and seems to lose her professional identity (lawyer by training) in the process. At this vulnerable stage in her life, Ruth finds herself preoccupied with her own (deceased) mother, with whom Ruth had a troublesome relationship and about whom she really knows very little (including the identity of the man who fathered Ruth). This preoccupation gives rise to what turns out to be a secondary narrative, a noir-ish account of a detective who is charged with providing Ruth with information by traveling through Europe, where the mother (referred to simply as “M”), spent much of her life, her final years in the Mediterranean city of Trieste.

This secondary narrative is developed in great detail, but we are never certain that the story it relates is actually “real.” It emerges from the dream state into which Ruth falls shortly after we have opened on her listening to the rain. “Sleepwalking,” we are told, “she might rise and dress and drive in the dark to a wedge-shaped building in the heart of the city,” a building that holds the office of Lamb, the private detective. Thus the story of Lamb’s investigation of mysterious letters Ruth has received, letters apparently from M sent three years after her death, could be interpreted as a projection of Ruth’s inner struggle with her mother’s legacy and influence as she contemplates her future responsibilities, to herself and to her family. That the novel is finally to be taken as the story of Ruth becoming reconciled to her past and prepared for her future is confirmed by the novel’s conclusion. Ruth has herself traveled to Trieste, where she is depicted actually encountering Lamb in the Duino Castle, but upon her return flight we are told that “[t]he castle is behind her and the man she made.” Moreover, she begins to visualize the faces of “the daughter who needs her. The husband who waits for her.” She “opens the new book, the blank book, the book of home. . . .”

Duino Castle is, of course, the setting of Rilke’s Duino Elegies, and we could certainly regard Beautiful Soul as also an elegy of sorts for M, as well as for the historical experience she represents as the child of Holocaust survivors. In this context, the story of Ruth’s rediscovery of mental and emotional balance is both persuasive and affecting, but finally it is still a rather familiar type of story. Even though the novel avoids narrating the story in a straightforwardly linear way, it finally does cohere as a recognizable story of transformation or discovery. Other devices that might seem departures from what is otherwise a variant of psychological realism, while they might provide some variety, are less successfully integrated into the novel’s aesthetic strategy. At times the narrative of Lamb’s activity is presented as if it were a movie, one that presumably both we and Ruth are “watching.” The parallel with classic detective films is relevant enough, but since Ruth throughout the novel is identified as “the new reader,” the cinema-style passages seem somewhat gratuitous, not really reflective of the way Ruth would be thinking about Lamb’s efforts (unless “new reader” is meant ironically). Similarly, the occasional metafictional interjections by the author of Beautiful Soul aren’t so much formally adventurous (such gestures have by now become almost commonplace) as they are formally (and thematically) superfluous.

In my view, a possible future for fiction, at least in its more forward-looking modes, might prominently include its partial merger with poetry (whence, paradoxically, it came), reconfirming fiction’s status as a literary genre, a form of verbal art. However, this would have to involve making the novel more “poetic” not just in its stylistic qualities, but in its extension of form beyond an exclusive dependence on narrative, however fractured or transfigured. Joshua Corey’s transfigurations in Beautiful Soul are compelling, and his skills as a prose stylist are well beyond those of most writers, but the novel doesn’t quite transcend the limitations of an approach still rooted in the recognized conventions of narrative-centered fiction.