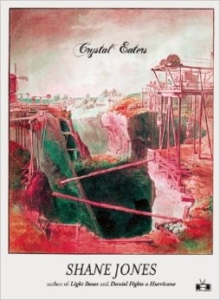 Dear Reader: consider this your first and last warning: Crystal Eaters is not psychological realism; it is not epic fantasy, though there are myths and a quest of sorts; it is not YA, though its ostensible protagonist is a young girl; nor is it precisely a coming of age novel, though perhaps it is closer to that than any of the others. Shane Jones’ writing does not fit into any of those easy — though perhaps mistaken — genres by which we categorize books and sort them on our shelves. That is, unless you have a bookshelf specifically for “Weird, Delightful, and Sometimes Painful,” where this book might just fit in next to The Orange Eats Creeps and The Soft Machine.

Crystal Eaters is the story of a strange and wondrous village near a city (called “the village” and “the city”) — and the city, it appears, is growing closer every day, encroaching on the villagers via tourists, surveillance, and the literal and uncanny growth of buildings. The villagers’ economy and culture centers on a crystal mine, which produces red, green, yellow, blue, and perhaps even the mythical black crystals. Everyone is born with 100 crystals inside them; throughout your life accidents, traumas, and the mere accumulation of years gradually deplete your crystal count until you die. Animals have fewer crystals than humans; the sun has enormously more, though these, too, might be running out.

At the outset of the novel — chapter 40, the crystal count of a dog — Remy McDonovan’s dog Harvak is dying. Remy’s brother is imprisoned by the city in what is billed as a “humane” prison, where inmates are supposedly treated with compassion and respect. The reality proves to be quite different. Partly in response to this, but mostly because of their leader’s own desire to be remembered, the cult of remembrance in the village — the Brothers Feast — is planning a “jailbreak in reverse,” which they will carry out as soon as they can define it. Every character in the novel, except those who have given up, is seeking a way to live forever — even Remy. Remy’s mother is sick, her crystal count rapidly decreasing with the red liquid she coughs into tissues. As the chapters, pages, days, and Mom’s crystals count down, Remy tries to convince her father to do something, anything, to prevent her mother’s death, even as she and her new dog Hundred search for the fabled black crystals which are believed to do the impossible — increase one’s crystal count.

“The idea of choosing something — a value system — and believing in it is very beautiful,” says Shane Jones in a recent interview with Paris Review, “even if it’s absurd in the face of death. . . . Writing is a way to dig at this wall.” For the characters of Crystal Eaters, belief is the only thing with which they can confront the chaos of the world around them. The city dwellers believe in progress and the rightness of the city, even as they discover that the city is expanding without their knowledge or effort; the villagers and those who live near the mine believe in the crystals, and that mortality can be quantified — even as their loved ones fall sick around them. Crystal Eaters is not precisely a story about the power of belief, because the systems in the novel prove to be founded on lies. It is a novel about the people who believe, and how belief might shape desire and action both.

It’s difficult to imagine a book this strange, this sharp and glittering, being published by anyone other than Two Dollar Radio. Based in Columbus, Ohio, Two Dollar Radio is a small, family-run indie publisher founded in 2005, and has published such works as Grace Krilanovich’s The Orange Eats Creeps, Karolina Waclawiak’s How To Get Into the Twin Palms, Francis Levy’s Erotomania, Scott McClanahan’s Crapalachia, and over two dozen other novels that fall under what TDR calls “books too loud to ignore.” These books may tend toward the small, but they are ambitious, far-reaching, and even visionary. Crystal Eaters is a twisty, sharp fable of adolescence, of grief, of growing. There is magic here, but it is wrapped up in the death of loved ones, in the pain of growing up, and in the looming threat of total environmental destruction.