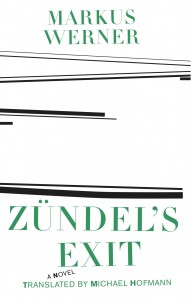 In Michael Hofmann’s introduction to his translation of Markus Werner’s Zündel’s Exit, he places the book in a literary tradition in which “one learns that life is impossible.” That can be narrowed down further, for in that swath of literature, there is a subset, where protagonists endeavor to give up in the face of the impossible world, and find just how hard it is to succeed at giving up. Zündel’s Exit fits into this sub-genre, the give-up novel. Opening the book for the first time, hoping it would turn out to be a true give-up novel, I have to admit that I had a bias: I seek out such books and they are easy for me to love; they look at the world in a way that puts glee and despair into the same dish, and it is an immensely satisfying one. So I started, biased to favor the book, ready to adjust expectation and interpretation if it turned out to be something else.

The first paragraph, opening Zündel’s worldview, let me laugh, cringe, and breathe. Zündel watches as a terrified lost child searches for his mother, finds her, rushes to her for safety, and is rewarded suddenly with smacks and scolding. This is the world as Zündel sees it, cruel, disappointing, and lacking compassion. When the child vomits, he tries to help, and yet sees his efforts as a failure, too late, cruelty already witnessed. Soon after, Zündel stakes his claim as to what it means to be of the world: “See, I’m not unworldly after all that. I can lie. I am competent.”

Zündel does not want to be worldly, though, does not want to be competent, only to lie enough to skip by and give up. Why would one want to continue playing alongside or fighting against a world when it leads him to this: “That’s life, my life anyway, chains, falls, scrapes, and I’m afraid I pissed myself as well. I need to get out of these trousers.” This is our hero, Zündel, resigned to a life of practical and bodily failure, with a mocking sense of false dignity showing through in the polite phrasing, “I’m afraid.” In tone, it almost isn’t even a complaint, rather an observation.

Zündel’s Exit is framed by a narrator, Viktor, a pastor and friend of Zündel, who is in possession of Zündel’s notebooks and close enough to be familiar with his voice. Zündel and his wife have planned a vacation apart, and during it, Zündel, almost as if cued by a tooth falling from his mouth, begins to come apart at the seams. That he abandons his trip almost immediately, to return home to an argument with his wife, only to flee again, is a mark of the indecision that plagues him throughout. He cannot maintain conviction, a sense of self-confidence, even when he is trying to quit the world, an action that demands conviction. One moment he stands tall, ending a paragraph with “Verily I say unto you: Something sensitive will make its way through this life sooner than anything brutish will get into Heaven,” only to have the second sentence of the next paragraph fall back, “Neither will anything sensitive get through life, nor will anything brutish fail to make it to heaven.” Acknowledging this “divided nature,” as Zündel later describes it, is key to understanding him and his difficulties.

The separation of the narrating I, Viktor, distinct from the third person consciousness that fills the novel, is as key to the success of the book as the closeness they share. Though Zündel sees no allies in his world, it is clear that they are there and that Viktor was one: “I am writing for myself and for the silenced Konrad, not for a world that has forgotten benevolence, not for a world that is critical of certain turns of phrase, but continues to allow suffering.” This alliance lets the book take on new dimensions it could not were Zündel the narrator, or if the narrator were not a close friend. The balance is a sign of the control and craft that Werner is able to deploy. Though there are times he notes that he is quoting directly from Zündel’s notebooks, most of the time dialogue and thought are a blend of his intimate recreating of Zündel and those notes.

This thin, crossable line between the narrator and Zündel allows the humor to come alive. If Zündel was the narrator, his endless put-upon suffering might become unbearable, while if the narrator didn’t care for him, we might not share in the sense of an impossible world where sometimes all you can do is laugh. Zündel himself isn’t funny, but barely detached from his thoughts, they are often hysterical. The matter-of-fact tone that sets up the absurd manages the laughs perfectly:

Armed with his note, Zündel stalked through the flat. No little platter put out for him anywhere. Just the lime green plastic dish on the kitchen floor had a few lumps of catfood in it. — A year ago, I would have felt sorry for myself in this situation, but I’ve toughened up now, he thought, fighting back tears.

He ate a pear.

Humor is a driving force of Zündel’s Exit, with most of it coming from the narrator’s layer of caring distance and the creative, lively voice that Werner gives him. This liveliness, plus his understanding of Zündel’s knowingly petty attempts to fight against the world, leads to moments that capture the heart of the novel: “[he] suddenly couldn’t remember if a human being had four, five, six or seven senses, thought that was a disgrace, but perfectly symptomatic of this cerebral culture, thought this, thought that, jumped up and widdled spitefully into the sea.” This hints at the cliché “pissing into the wind,” and has the same sense of pointlessness but you can feel Zündel’s glee and even satisfaction in the retaliation so without effect. Pissing into the wind is a failed act that backfires, but widdling into the sea is a completed act that no soul could ever notice. Since he’s given up, the tiniest spite of it all is enough.

Zündel himself is in on the laughter at times, as when he begins to create a new dictionary to reflect how the mediocre world uses language to excuse itself: “Egoism is now self-actualization. Consideration for others is loss of self. Brutality is truthfulness. Faithlessness is spontaneity. Lack of principle is openness to fresh experience.” This is immediately preceded, however, by a darker side of Zündel, his hurt that turns to rage, most hurtfully directed against his wife. Mistakenly believing that she was unfaithful to him, Zündel begins to analyze what makes humans as vile as he sees them, and ends with the lies that a language of complacency leads into: “So we all lie and cheat our way from one falsehood to the next, from self-deception to self-deception, and in the end every death bed contains nothing but a stinking, slimy, loathsome bunch of deceit.”

The way his hurt, his denial by the world, leads to thoughtless anger is one of the great flaws of our hero. The self-centered blindness is at its most prominent when it comes to women. He notices and mocks the sexism he sees, because there it is a part of the culturally-defined mundanity that he feels crushing him, but when it comes to his personal relationship, that shifts. Ground down, given up, Zündel is unable to see that the way he treats his wife is with a frustration and meanness that the world has beaten into him, and that he is treating her with the same baseness and impossibility he is trying to escape by giving up.

Within all of this, through the narrator, Werner shows care for how people relate to each other. We see Zündel and his wife argue, each of them simply looking to be cared for by the other, and in a simple heartbreaking paragraph, Werner lays out two acts of kindness that lead only to suffering, albeit minor. In their early days, Zündel and his wife share two pillows, one hard, one soft, and suppressing their own comfort, they offer the pillow they would prefer, imagining their partner would also prefer it. That image, two people sleeping beside each other, uncomfortable, believing they are sacrificing their comfort for the other, is the type of failure to connect, to beat this world, that underlies Zündel’s breakdown. The attempts to surpass this, to connect with other outsiders, other people who are against the world, continue throughout Zündel’s Exit.

Unfortunately for Zündel, or fortunately, if you are rooting for the success of a pure give-up, he fails to notice how many allies he has, how many people share his worldview, but who would rather find someone to fight side-by-side with. His wife and mother, worried about the missing husband and son, talk about him, with his mother defending him and herself, “I refuse to raise a child, said Johanna, in conformity with something I have identified as bad, just so he has an easier time of it. That’s not in my gift. I’d rather take the blame for having inadequately prepared him for so-called life.” Add to this his friend Viktor, people he meets on his trip, and his wife, his patient, faithful wife whose complaints are little more than the normal frustrations of a relationship, and it is enough to suppose that it isn’t that Zündel is blind to his allies, but that they are actually a greater disappointment, for they see the mundane impossibility of the world and the complacency of people, but cannot bring themselves to try giving up.

By not giving up, they are participating, validating the world, and Zündel has lost all tolerance for that. Hope resides in it, and that hope is foolishness. The impossible world wants us to have hope so that we remain complacent. Engaging in a rage against it is as much participation as is grinning happily through life, and in the end both get humanity nowhere: “Meanwhile, humanity, sunk in ever deeper gruntlement, worships at the alter of positivism, adores the doddering politicians who steer our destinies and stride around and shout and rattle their sabers only because they want to displace death.” Werner rejects both routes and Zündel’s Exit bursts, then fades at the end, refusing to become complete, to reach firm grounding by its end, and this itself keeps with the heart of the novel. All of the relationships are incomplete, fractured, most especially Zündel’s with his father, a lack that may be key to his whole perspective. By remaining incomplete, gesturing off into the rest of the world that hasn’t given up, Werner hands the give-up hope, and maybe lets Zündel fulfill his desire to “be able to sit on a park bench and say: You know, I really couldn’t care less.”

P.T. Smith is a writer and critic living in Vermont. He has written for Three Percent, Bookslut, Quarterly Conversation, and most recently Music and Literature.