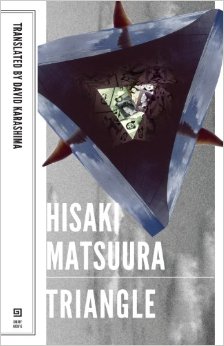 Not being able to read Japanese makes it twice as hard to review Triangle, a stark and disturbing novel by Hisaki Matsuura and translated into English by David Karashima. The problem with reviewing any work of translation is that they’re books twice-written, and I don’t have any idea of what the original Japanese text was like. I take it on faith that there’s a good portion of parallel meaning between the two books, but the details of the relationship are invisible to me. As an example of what I’m talking about, take this excerpt from TRIANGLE’S shady narrator, Otsuki:

Wasn’t that the most terrifying thing that could happen to this world? Since my morning glories were ripped from their vines, that fear — the stifling fear that had plagued my junk withdrawal had come back to stay twenty-four hours a day. It was a constant reminder that something that was not me could invade my body anytime anywhere. Suddenly, the wall I’d built between myself and the world was punctured with holes, battered so thin, until it no longer served any real purpose, allowing evil spirits to come and go as they please, eating away at my insides.

It’s a wonderful passage. The words tiptoe around some surreal vortex of self-loathing, flirting with annihilation. It’s interesting writing even out of context. But like Jonathan Blitzer wrote recently in Words Without Borders, “There is a certain paradox to reviewing the work in translation. The translation is both utterly immediate (its effects totalizing) and at the same time impossibly elusive.” That powerful ambiguity makes translating as difficult as it is necessary. The hidden relationship between writer and translator charge the best translated works with a strange energy, the origins of which should remain a little occult if done well. In fact, the better the translation, the more paranoid it should make the reader: ‘how much of the original author am I actually reading in any given passage? Who is in charge here?’ The best translations are a perfect conspiracy.

One imagines (or hopes) that Triangle is suffused with a similar sense of paranoia-inducing conspiracy even in its original Japanese. The protagonist, Otsuki, is a jaded, crusty, ex-junky drifter who works at random jobs while mostly living off of the various women that come in and out of his life. He was a Romantic once, but “. . . now that I was a jaded thirty-something, the best moments with a women were not when she arrived at your door, or when you were undressing her, but when you watched her face in the window of a taxi disappear as it drove off.” He’s a character we’ve met before in a hundred other noir and mystery narratives. And like in Chinatown or any Philip Marlowe story, Otsuki must mimic an Orphic descent into a contemporary Underworld — a place where natural order is upturned and the stoicism, or callousness, of the protagonist is put to the test.

The invitation to set off on the journey is extended by Sugimoto, a shady criminal associate from Otsuki’s past. Sugimoto explains that a great Sensei and Calligrapher named Koyama wants to meet with Otsuki about a tantalizingly vague job offer. Reluctantly meeting with him, Otsuki is shown a film composed of images of insects spliced with graphic sex scenes. He’s initially as repulsed by the project as fascinated, and this melange of disgust and desire sets the the gears of the narrative into motion. Otsuki is eventually asked to begin filming his own portion of the project, an erotic study of the lead actress’s hair. He obsess over the task. The affair he’s been having with a married woman skids out of control, his job ends, his fascination with the very young (but how old exactly?) lead actress nudges him to the frayed end of his own consciousness.

Like every noir hero, Otsuki’s callousness, his junky stoicism, is tested when the coordinates of his reality shift to reveal hints of a parallel and hidden world. From this new perspective, everyday objects resonate with alien energy. These objects are heralds of the new reality that the noir hero finds himself inhabiting.

I rolled onto my side and saw, on the floor by the window, a dented 350-milliliter can of Sapporo Black Beer. Was it there when I laid out the futon? Did I not notice it? I didn’t like the way my thumb seemed to fit the dent perfectly. The tab had been pulled and left standing up, the can was half-full, and there was a trace of saliva on the edge. Were there fingerprints too? Of course if there were, how would I know whether they were mine or not?

The objects possess a Lynchian resonance, in which they act as reverse-mandalas — leading not to higher states of consciousness, but instead frenzying the ego into delusional fixations and hauntingly vague intimations of paranoia.

In the 2006 film The Pervert’s Guide to Cinema, Slavoj Zizek says that to really figure out what a horror film is about we should ignore the horror aspect and just pay attention to what else is going on parallel to the hauntings and possessions. While that isn’t so easily done in a novel like Triangle, a novel continually smoldering with low levels of horror, it becomes quickly obvious that a lot of this book’s psychic energy is dedicated to a fear of women.

Otsuki is neurotic and paranoid about the agency of women, about men being left behind financially and socially in a new social order. Hiroko, the married woman that he has an affair with, is a constant threat to Otsuki with her money and ability to leave whenever she wants (read: her freedom), “In her skirt and stockings and only a bra on top, she ignored my last comment and concentrated on putting on her makeup, which made me feel lonely, like I wasn’t important to her, and it made me go quiet.” Otsuki’s pain and violence is a worthless currency in a new world inhabited by sexually and financially free women. This misogynistic fear overtakes Otsuki’s mind by invading his senses. The female image devastates him. Smells disorient him. Even, maybe even especially, the female voice confounds him:

I’m confused, not sure I’m hearing correctly. But are those screams like the screams in the film — the cries of ecstasy? They would never be like Hiroko’s screams — the screams of a woman at the peak of her femininity, screams with richness, a range of high and low tones, and a sweet persistence and thickness. How many women who died in this very location 150 years ago died with cries like that?

Otsuki can’t locate Hiroko’s scream in either agony or pleasure. Her voice blends the past with the future, confusing cause with effect, and undermining Otsuki’s sense of reality.

A wonderfully complete paranoia saturates Triangle. The heavy misogyny and reverse-mandalas collude to weight the plot with an existential unease that we can be critical of even as we empathize with Otsuki suffering through it. It’s a useful paranoia. Drugs can cause this. Conspiracy can cause this. By extension, translation can cause this, with paranoiac attention hanging on each word, and each word resonating with as much occult energy as the objects in Triangle. As T.E. Hulme said, nothing suggests itself. Paranoia is the attention paid to the possibility of a new reality.