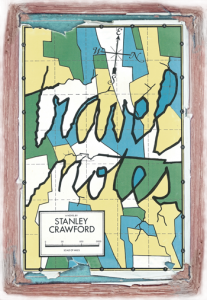 Most people, Stanley Crawford included, would say that 1972’s Log of the S. S. the Mrs. Unguentine is Stanley Crawford’s best book. A surreal novella about a gigantic barge wandering the ocean and the unraveling marriage of the couple who pilot it, Unguentine is stylistically revelatory, funny, inventive, and sad, a novel that reorients us in the best ways to what fiction, and the sentence, can do.

Part of Unguentine’s continued visibility can be attributed to Gordon Lish, who championed the novel when it first appeared; these days the Lish imprimatur goes a long way toward ensuring a book maintains a healthy readership. Crawford’s other work, though it has its vocal devotees — Ben Marcus and Deb Olin Unferth among them — has tended to reach fewer readers, even to the point of falling out of print.

Travel Notes (From here — to there), Crawford’s second novel, went through only one printing when Simon and Schuster published it in 1967. Luckily, Calamari Press is reissuing it this spring, doing the great service of reviving a lesser-known work by one of America’s singular contemporary prose stylists. Perhaps more importantly, though, the reemergence of Travel Notes is notable because it’s the novel Crawford wrote right before Unguentine, and in it we see hints of the masterpiece that would arrive five years later.

Travel Notes has three parts, each one ostensibly a record of a nameless narrator’s journey through a different foreign territory. And normally, at this point in a review, I’d offer a quick synopsis of the central action of these trips. But Travel Notes is so shaggy doggish, its action so insistently non-causal, that any attempt to translate the narrator’s disparate jaunts into something with a discernible narrative drive quickly falls apart. In just the first thirty pages, he hires a driver to take him to a tourist attraction called The Famôus Lake, but their car breaks down in the middle of the road. The men discover a “herd of longhorn hairy cows,” shoot one, and roast it over a fire. Then a bus arrives; it’s full of soldiers. They stop to eat longhorn hairy cow, then take turns copulating with someone the narrator calls The Païnted Wōman.

The next morning, the group decides to dismantle the bus, transport it piecemeal around the broken-down car, and put it back together; this process begins but soon stalls. Then the narrator meets an aviator who happens to have a small biplane stored under a tarp on the bus’ roof. The two men leave the group, and when the aviator, who’s now fully undressed (it’s a “perfect day to fly in the nude”) tries to start the plane, it won’t work. Then the narrator leaves, walking to a city where he meets a “young linguist” who brings him to a museum that has “only one exhibit: a large golden coach.” The narrator purchases it. Then they encounter a man who’s trying to get rid of an acne-ridden white elephant. Then they buy it, harness it to the coach (now laden with an heiress’s luggage that the narrator has also acquired somehow) and head off.

The entire novel is like this, making for a reading experience that goes many places without seeming to get anywhere at all. Every object remains playfully balanced on an uncanny edge. The narrator’s experiences are almost recognizable, though always shrouded in the impenetrable vagaries of dreamscape. His descriptions are so non-committal — he mentions “recent domestic turmoil” or customs that are “the product of some local peculiarity which I might never understand” — they could apply anywhere. When detailing a chic capital city, he’s doubly elusive; it’s “filled with notable monuments, buildings, exhibits, affairs, activities, trade, cultures, which you can find adequately described and illustrated in the handy reference works at your local public library which indeed should be your companion to this volume.” “Indeed” indeed.

These strategies, of course, are designed to capture the disorientation of all foreign travel, the destabilizing, often hilarious, experience of being in a place where language, simple customs, politics, even love, operate according to laws you’re not privy to. For Crawford’s narrator, travel’s one consistent law is that the tourist must constantly play catch up. Foreign objects stay so alien to him they’re literally protean, capable even of shapeshifting mid-sentence:

Then I discovered a telephone behind the desk (cemetery, rather) and was going to call for — help, I suppose, in spite of the language difficulty — when the telephone receiver began to melt in my hand, melt, I repeat — for it was made out of a very flavorful chocolate.

Many of these images, such as one scene where the narrator finds himself in a totally silent city waiting in a line that leads to the front of a firing squad, resonate with a signature haunting energy. But if the fluctuating landscapes and hallucinatory palpitations were meant solely to show us that traveling is weird, Travel Notes would be a fairly simple book. And it’s not. In Crawford’s seemingly haywire progression, we stumble across hints of tiny patterns, recurrent images — doubles, objects taken apart and reassembled, bureaucrats seated at isolated desks, The Païnted Wōman. Just enough to tempt us to connect them, though it’s impossible to know how. We also catch glimpses of possible historical references — an uprising in the first section plays out like an absurdist account (complete with a cherry pie assassination) of the 1967 military coup in Greece, which occurred while Crawford was living on Crete.

The narrator’s strange journeys speak as well, though, to more pressing questions about disintegration and entropy. Crawford’s fiction, from the P.I. spoof Gascoyne to his savage take on Bush-era plutocracy, Petroleum Man, has been primarily concerned with characters (all men) who invent hyperbolic systems of control and order, then stand by as those systems give way in front of them. Unguentine’s glass-domed barge with its endless, impossible upkeep, or Leon Tuggs’ Thingie®, a supposedly perfect tool designed to “keep track of the proliferating things of this world” but that can’t forestall his family’s dissolution — it’s the crackup and rust that fascinate Crawford; how achievable total dominance seems and how readily the drive for control renders us disoriented, abusive, and ridiculous. When the narrator of Some Instructions speaks to his son about vegetable preservation, his orders actually voice a more cosmic difficulty, the absurd challenge of staying on top of a reality where a fundamental law states that entropy is always rising: “The trick comes in hanging on.”

The organizing system churning through Travel Notes can be found in the novel’s ostensible purpose as a guidebook. The sporadic tips the narrator offers the potential traveler — how to negotiate prices, a note about the tasteful decorations of a particular villa — fall hilariously impotent in the face of the other transformations and non-sequitur violence surrounding him. The logic here is Kafka’s, one emphasizing powerlessness, comedy, and terror. And like Kafka’s, it’s a logic Crawford often locates in the formal structures of speech, the way language can seem to contain crucial information even when it’s actually just bunches of barks and wind. When the narrator relates a local’s perplexing answer about a train route, we get a rhetorical shell with nothing inside:

My interpreter waved his hands, shouted everyone into silence with a verbal torrent, now went on towards a softly worded conclusion. That is, there seemed to be words in here, though when you listen to a foreign language you can never be certain. And when the gathering broke up, he turned to me and explained something to the effect that his country was thus.

These much deeper issues surrounding language reside at the core of the narrator’s experiences of material disintegration and instability: reality’s connection to words, and the threads that bind fictional narrative and real life. We see this in Crawford’s metafictional nods — the narrator’s recording all his experiences in a notebook he regularly describes — as well as in the conversations the narrator has with the linguist, which focus on the tenuous connection between words and things:

. . . back at home he had embarked on the project of inventing just one new word, which had led him into inventing a whole world — and he had almost botched it up. I was not surprised. I asked him for what new thing he had invented the word to describe, and he replied that he had invented the word first, so as to invent the thing next. That was how he got started. And, of course, once you started — if you could — what was to be believed thereafter? Or worse, who would believe you?

In Travel Notes, we can see clear hints of Log of the S. S. the Mrs. Unguentine, Crawford’s next destination: the time the narrator spends adrift on a raft in the middle of a shallow ocean, the abusive hotel janitor he encounters who’s “always outside fiddling around with his things.” But it’s Crawford’s exacting attention to the mechanics of language that really connects these seemingly disparate books. Language, after all, is our most basic means of control; to name is to dominate. And the narrator’s screwball travels, framed by Crawford’s sentence-level precision, forces us to confront the precariousness even of that control. In Travel Notes, even the words are giving way. When the narrator comes across “seven masonite panels” containing antique writing, language itself turns ephemeral; the panels contain “archaic words referring to things which no longer exist; or words found in every brain but now obsolete and useless, like the appendix, tonsils, body hair and toenails.” Words fall subject to the same entropic forces ravaging the body; the only certainty is where both of them will inescapably end up.