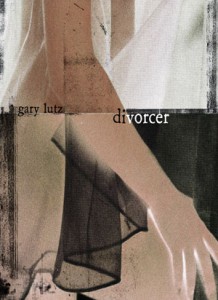 Divorcer may be the best opportunity yet for readers who have shied away from the fiction of Gary Lutz because of its reputation for being dense and “difficult” both to discover that Lutz’s work is accessible after all and to understand why his admirers are so fervent in their praise. The stories included in this book are just as remarkable in their accumulation of singular, surprising, and painstakingly constructed sentences as those gathered in Lutz’s previous books, but Divorcer has a thematic coherence that puts Lutz’s wordplay into a context that helps us more readily appreciate the role such innovative sentences play in giving rise to the larger discursive and aesthetic order of which they are a part.

Lutz has himself described the method by which he builds his sentences in some detail, most notably in the essay “The Sentence is a Lonely Place,” but also in numerous interviews he has given over the years since his first book, Stories in the Worst Way, was published in 1996.  Most of Lutz’s stories, he explains, are conceived as sentences, or a gradual accumulation of sentences, without relation to character or a plot. He describes his interest as being almost exclusively in placing these sentences together in the most resonant way he can devise, resonant literally in how words reinforce and echo one another and how the sonic and grammatical relationship between those sentences maintains and magnifies such echoes. Assonance, consonance, and alliteration play an important role in this process,  as does manipulations of grammar, odd juxtapositions, unusual word choice, word combinations and neologisms. We don’t have to get very far into the first story in Divorcer, the title story, to find a passage that immediately illustrates many of the typical features of Lutz’s prose:

The afternoon welcomed me into its swelters.  An hour went by, then cleared the way for another. I had found a bench near the store and stood in quiet beside it. Others came and sat: unfinished-looking men, a pair of proudly ungabby girls I took for lovers done for now with their love, a woman graphically sad in ambitious pinpoints of jewelry. Then a man so moodless, I could see all the different grades and genres of zilch behind his eyes. The city flattered these people who in the country would have been flattened fast for all to see all the same.

The reader is immediately invited to pause and consider the first sentence as a self-contained linguistic unit. Why this unorthodox figure—“welcomed me into its swelters”—with its verb made into a noun? The second sentence also draws attention to itself, this time through the strange and arresting use of personification, reinforcing the conclusion that Lutz wants us focused in at the sentence level. To cling to conventional expectations that such sentences will finally become vehicles for the forward movement of plot or character development will lead only to frustration. In fact, it seems to me that the assumption that Lutz aspires for his prose to act as a transparent medium for storytelling often results in the dissatisfaction that some readers and reviewers experience in his stories.

For readers willing to accept Lutz’s redirection of our aesthetic interest, it is perhaps tempting to conclude that Lutz’s art is an art of the sentence, considered in isolation from the elements of narrative, character, or setting. Thus almost all reviewers and interviewers who express admiration for his fiction concentrate their attention on Lutz as a unique stylist, ignoring the way his stories retain these elements. The formal patterns that emerge are both a result of and a natural aesthetic complement to the singular sentences that constitute his work. If individual sentences in a sense leave us suspended in their word twists and serpentine syntax, the stories in which they appear do something similar, accumulating these sentences to create a kind of layering effect that gradually expands our sense of character and situation without making them secondary, mere vehicles for advancing a conventionally developed plot. The stories work by linking sentences to paragraphs to episodes, establishing a relationship of mutual resonance and reinforcement, building up from character and situation an impression of depth or breadth that can seem static, but could also be accepted as an aesthetically coherent alternative to the notion that “story” entails movement forward.

“Divorcer” not only introduces us to this alternative strategy, but also to the theme that pervades the work and allows Lutz to expand his technique beyond the bounds of what would be possible in an individual story. Like all of the other pieces in Divorcer, it is composed of marked fragments, each one adding a layer to the narrator’s account of his short-lived marriage. The sections move freely around the narrator’s recollections of the marriage, each of them capturing a moment or arriving at an insight that illuminates the circumstances of the marriage and its ultimate failure, but by no means suggesting that human relationships can be explained by representing them in a “story.” As one would suspect, the reality of failed marriage is most memorably evoked in the most bracing sentences:

Marriage had not worked out to be a doubling of each other’s life, though there were duplicate juicers and      sources of music.

My penis might have had reach, maybe, but it never increased itself for her.

My wife: she was the active one in the marriage, mixing other men into it.

Both through sentences like these and through a formal arrangement that reproduces the poetic suspension in which such sentences are designed to hold the reader for the story as a whole, “Divorcer” allows us, in effect, to inhabit the experience of divorce rather than simply read about it.

The other stories in the book expand and enhance this effect, approaching the experience from different angles, augmenting it through depth of treatment, their characters compelling precisely because they seem to blend into each other, their shared predicament conveying a powerful sense of pain, confusion, and loss, as well as, frequently enough, self-hatred. In “The Driving Dress,” the narrator loses weight in order to begin wearing the clothes left behind by his ex-wife, coming to terms with his (second) divorce by fleeing his own identity. In “Fathering” and “Middleton,” no actual divorce is involved, but each introduces us to a marriage at a point when its failure is implicit. In the former, a father focuses his attention on helping his daughter through school, after which his job as a father will be mostly done. Meanwhile, he arranges trysts with other men for his wife, as if acknowledging that the marriage itself is now past its usefulness. In the latter, a husband’s wife has died, and as the husband briefly relates to us the events of the funeral, it becomes clear the marriage had become perfunctory: “There had in fact been talk of divorce, but we talked about it the way other people talked about getting a pool or maybe just a pool table, even just the miniature kind that rests atop a regular table, even a card table.” That the marriage was inadequate to the husband’s needs is confirmed when shortly after the funeral he begins a sexual relationship with a man.

Two additional stories, “To Whom Might I Have Concerned?” and “I Have to Be Halved,” widen the focus to include same-sex relationships as well, although they are portrayed as just as subject to disillusionment and dysfunction as their heterosexual counterparts. Thus sexuality in Divorcer is not shown to make a significant difference in tempering the fragility of intimate human relationships. All human beings are prone to the same blindness, indifference, and casual cruelty, all human love accompanied by an expiration date. As the narrator of “Womanesque” explains his failures, “It’s just that I was born, grew some, started differing, didn’t stop.”

These are certainly not original insights. What is original in Gary Lutz’s fiction is the especially powerful way in which these insights are expressed, emotionally affecting without resorting to traditional narrative devices. He does not narrow the possibilities of “literary” language to the usual sort of figurative flourishes that too often serve mostly as linguistic decoration, nor does he rely on typical notions of “plot” or of “well-rounded” characters or any of the other established elements of fiction that draw attention away from language. If much “experimental” fiction is primarily experiment with form, Lutz’s innovation is in paring back form in order to reconceive the purpose of the sentence as the truly essential element of prose fiction. In the way they reinvigorate the English sentence, Lutz’s stories in Divorce ought to inspire other writers to consider how close attention to the shapes and sonorities of sentences can in turn bring a satisfyingly new kind of organization to fiction.