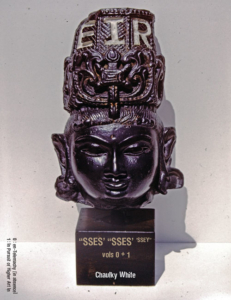 Chaulky White is Derek White is the publisher at Calamari Archive and “gatherer” of this book, entitled ‘SSES” ‘SSES” “SSEY’, vols 0 + 1, with a vol 2 quickly on its heels.

Their father has been gone a long while. Suicide. 1982. Kevin, Chaulky, brother ½, once went on something of a search for him. Well, maybe him. Maybe also love. Or not-aloneness. As Kevin traveled across Asia and Europe, running out of yuan, running out of francs, running out, he scribbled down his reckless narrative. Trying to make friends with other white foreigners in hostels. Scrimping to buy food. Feeling guilty about the food, and the scrimping. Hoping he might feel something, anything, besides this relentless guilt and anxiety.

These notebooks eventually become the majority of his graduate art thesis.

Now, here, Derek compiles his brother’s notes, this thesis, sketches and diagrams, emails from their mother, original fiction, and passages from Joyce’s Ulysses as well as the Odysseus myth to create a hectic, dense, ‘zine-like object of utter catharsis. The result is nearly impenetrable, with “fuck anyone who reads this” a literal take away from attempts to navigate the text. But, between reflexive rants on semantic externalism and modernist literature, the Heart cannot help but burble to the surface.

That is why I pressed forward.

Without this glimpse of genuine Heart in a book that’s not necessarily entirely preoccupied with being read by or readable to others, it would have been cast aside as merely “masturbatory,” “solipsistic,” “who could care?” There are long stretches of pages that seem purely aesthetic. An impression of turmoil. The dexterity of presentation, the use of childhood photos, original teleplays and scanned papers from Joyce’s archives used as textured backgrounds, set a frenzied pace, the eye shifting manically, making split decisions about what thread to follow, maybe the wrong decisions.

“Sees seas to the power of sea” makes you work for its Heart. It borrows from House of Leaves in some of its textual experimentation, though it complicates the form several steps further with infinitely more ways to stumble into a deep pitch — “was this the right choice? Abandoning this excerpt of Ulysses to wrench the book upside down and squint upon a faded, sprawling triangle of text, starting from scratch to uncover intention? Is this the correct path as White would have intended?” White’s structural maze is in this way perhaps even more treacherous than Danielewski’s physical one.

There too is an enveloping theme of brotherly remembrance and parent-ly loss as in A Heartbreaking Work of Staggering Genius, yet it doesn’t reach the same level of sentimentality. The footnotes upon footnotes of tangents both deprecating and academic are a clear echo of Foster Wallace. There’s also the aesthetic adherence to rough ‘zine form which seems nostalgic for anarchic, punk teendom — faded text, errant highlighter marks, some errors notated with [sic] and others inexplicably left alone. Here, wait, let me show you just a snippet: 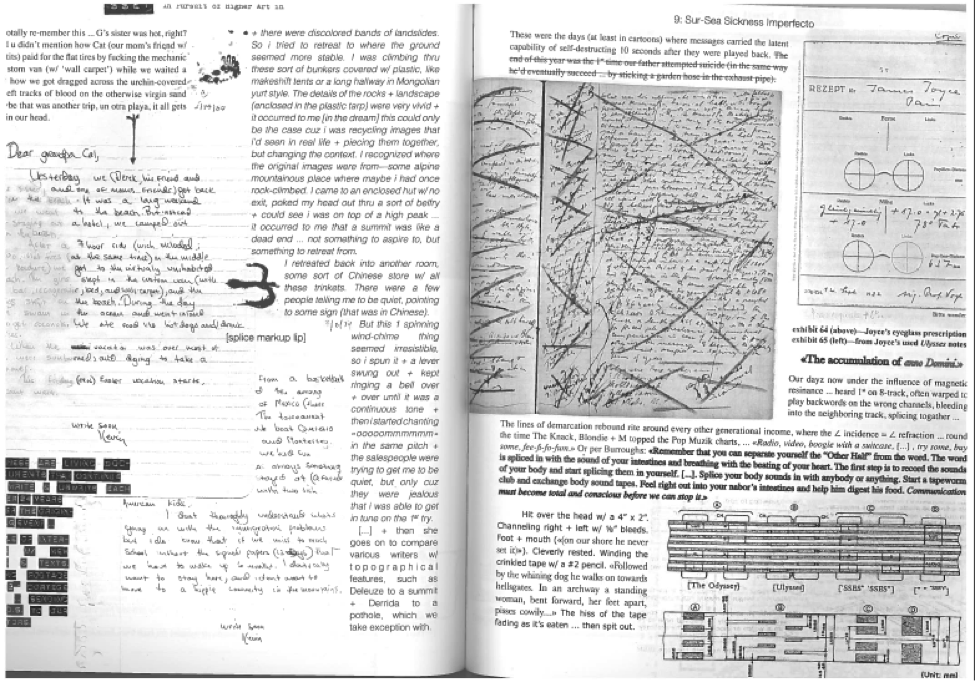 Derek at one point strives to lay out his plan in a series of strategic graphs and tables (“Here’s the continued plan . . . at least thru this middle Odyssey section . . . ”) but even he recognizes that this is in vain. He ‘fesses up thusly:

Now, compare the inorganic attempts at adherence to Odyssean myth (which even Joyce doesn’t adhere to in the strictest sense) to these entirely organic bursts of aforementioned Heart in the following excerpts from brother-½ Kevin’s journals:

Isolated from comment, kept bare. This is where ‘SSES” is at its most navigable, and thus most effective — reading not unlike Ben Lerner, the son & heir to DFW perhaps in his overthinking and just-charming-enough self-deprecation. These moments are rare, but that makes them all the more devourable — a Pavlovian response to the rewards of decipherability, relatability, humanity, pecked out from between the overwhelming academia. These Heartfelt easter eggs, as in Pavlov’s test, are not consistent, or else they would not pack that same woeful wallop. The trick is to scavenge.

Derek White promises a second part TK that offers another layer of reflexion — an internal one. Part II is to be titled “The Homecoming,” most likely plumbing the depths of prodigal Kevin/Telemachus’s return and the years that led to his overdose, seen through a younger brother’s blued lens. With a voyeur’s curiosity into the mangled saga of a real family, with real history, that will end we-know-not-where, I admit, I await it.

Lauren Friedlander is a reviews editor for Full Stop and works in marketing at Simon & Schuster.