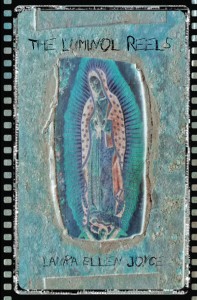 You can afford to read Laura Ellen Joyce’s The Luminol Reels, which runs a slender ninety-seven pages, multiple times. Plan on doing so. This novella cum how-to-manual — replete with pronouns demanding considerable detective work to identify the referent; page-length sections of vexing connectivity and often dim internal legibility; and objects with some function in the world Joyce constructs but which could arguably use a clarificatory glossary entry — acknowledges its difficulty: a section labeled “Reading” notes, “The first time will be grueling. You will be in handstand position, paper fed roughly down your gullet until you are blue. If you lose height, poise, or grace repeat the task.”

A passable summation seems to be that The Luminol Reels adumbrates a dystopia in which women’s bodies and interiors are violenced in the same ways they are outside Joyce’s novel — including rape, murder, compromised reproductive freedom, coerced display — and in which the manifestations of these brutalities are presented at and beyond the semblance of Hollywood horror script: there is a factory where young girls are drained of blood and hung on hooks to cure, after which they will be cannibalized; there are pageants of, it seems, dead bodies. Simultaneously the work forms an instruction manual for how the protagonist might be able to journey to “bring the girls back to life and make their bodies whole.” This protagonist appears to be a mother whose daughter has been stolen from her, and is addressed throughout as “You.”

The novella employs the conceit of luminol, a forensic substance used to detect blood at crime scenes, and through this conceit it investigates violence against women. While this violence is recognizable in the fiction generally, the novella’s specific investigations of misogyny and violence within the Catholic Church and in Ciudad Juarez demands that the reader bring their own background knowledge. These locations of violence are gestured at throughout The Luminol Reels — the novella’s factory evokes the maquiladoras in which many girls and women come to Ciudad Juarez to work, and the recurring mention of saints and martyrs invoke the Church, as do section titles such as “Black Mass.” But Joyce chooses not to write journalism, which could provide for the reader an expository informing or analysis of what is occurring in these locations. As far as insight to these specific sites of misogyny goes, for a reader to take from The Luminol Reels more than the very apprehension that it concerns itself with these sites via allusion and allegory, the reader will need to have (or acquire) knowledge of these sites from a source other than Joyce’s novella.

The novella’s structure, too, can be opaque, and is admirably inventive. It’s chapters — titled “Agonies,” “Martyrs,” “Murderers,” “Porno,” “Rituals,” “Bodies,” “Virgins,” “Sacrificial Laws,” “Saints,” “Luminol,” and “The Dead Return” — are broken into sections. Some of these sections are described as reels. One such section, titled “Holy Water,” is subtitled, “This reel should be handled with care. Once dried out it has no further effect.” Other sections refer to objects within the world of The Luminol Reels. For example, “Stars” refers to some psychotrope, and is subtitled “When you eat the stars there will be a psychosis,” with further instruction that “Stars are to be used with the following reels: Big Dipper, Oracle.” It is as if the sections, while constituting a narrative and manual for how to rescue the protagonist’s daughter and resurrect the dead girls, simultaneously constitute post-its tacked onto objects in the toolkit for this journey.

Joyce’s deployment of reels helps construct, and reflects, the novel’s cinematic mode of presentation. The contents of the reel are sometimes displayed to the reader for viewing, as in “This one comes next. A close-up of her clean dollflesh. It is sewn up but there is a special effect — it blazes. . . . Cut back to her treacly hair scraped back. The braids you twisted in have been displaced. Blood on her lips.” For other reels, though, only a summary of the reel’s content is provided, as in, “This is imported footage of a multiple cadaver show”; alternatively, only instructions for the reel’s use is provided, as in “This reel must be played only at dawn and twilight. It may accompany the deaths of children; vigils and funerals if there has been no sexual contact (forced or natural). Or at any séance where two or more gods are invoked. It may never be used pornographically or for vaginal pleasure.”

This refusal to display the contents of many of the reels seems to be motivated in part by a concern that the novella’s gruesome details not blur, in some way, into entertainment, and that readers not take their gaze for granted. Announcing that “This is imported footage of a multiple cadaver show,” while withholding the actual footage, renders the reader self-conscious of having watched a presentation of the footage displayed in other sections.

Some sections, though, seem to label neither a reel nor a material object. The section “Fur,” for instance, begins, “This is the season for hunting. There are foxes, squirrels, deer and baby beers.” On one reading, “Fur” might be the name, within the world of The Luminol Reels, for a season of the year. (Perhaps replacing “Summer.”) In an alternate reading, it could simply be the case that this section is titled in the same manner as the section of a traditional work of fiction — i.e., thematically in some way — and this section’s title happens to be “Fur.”

This ambiguity has divergent implications for the interpretation — and experience — of reading The Luminol Reels. Consider that the section “Factory” is subtitled, “This reel is educational and must be broadcast during the entirety of Fur.” If we read “Fur” as a season in the world of The Luminol Reels (i.e., the first reading in the paragraph above), then the interaction of the sections “Factory” and “Fur” seems simple enough: the novella’s protagonist — whose identity the reader is encouraged to try on through Joyce’s use of “you,” producing an effect that is constructive insofar as it assumes a female role for the many readers who are male, but, if abstracted analytically from its gendered context, simply produces the fairly well-worn effect that this archetypal form of second-person narration is known to produce — must play the Factory reel during the season of Fur, on her journey to rescue the girls.

If, though, we read “Fur” as simply the title of a section in the novella The Luminol Reels, then it is as though readers simultaneously embody the “you” — the mother — presented in the novella, and also separately embody themselves, the readers. This multiplicity results from the facts that the Factory reel is presented to the mother (and the reader-as-mother), but the instructions for this reel apply, in at least one way, to the reader considered simply as the reader. (This reader-as-reader address results because the instruction that Factory “must be broadcast during the entirety of Fur” can be read as instruction to the reader to read the section [not reel] “Factory” alongside the section [not during the season of] “Fur” [and, in all likelihood, based on this reviewer’s experience, then wrack their brain wondering what the purpose or effect of reading these two sections alongside should be or, even, is.])

Insofar as the section “Fur” is engaged with in this latter manner, a destabilization of identity is achieved: the reader is simultaneously the mother within The Luminol Reels and the reader reading about this mother. This out-of-body effect — this encouraged alienation from one’s body — may be experienced and regarded in any of a number of ways within a novella so focused on violenced bodies. And through this narratorial construction Joyce again makes the reader self-conscious of their gaze.

It should be clear by now that The Luminol Reels is both difficult and smart. It is also brutal. While most readers will share with this reviewer the sense that they failed to grasp so much of the novella, it should nevertheless succeed as a whip to attention, an invitation to learn more about various crime scenes of misogyny, and an expression of hope for resistance.