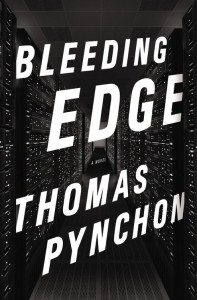 Surely if 9/11 conspiracy theories had not already arisen, like the dust plumes from the Twin Towers, Thomas Pynchon would have invented some. As it is, those existing theories seem to have been propounded by readers of The Crying of Lot 49 or V, novels whose plots imply endlessly ramifying connections, always complex, if ultimately mystifying, alternatives to simpler explanations, and leave the impression that if no final explanation is really satisfying, that’s because the actions to be explained are so puzzling, the conspiracies so potentially vast. Certainly the world evoked by 9/11 conspiracy theories seems very much a Pynchonian kind of world.

The same thing could be said about the Internet. With its origins in the U.S. Defense department, the “world-wide-web” is in some ways a predictable phenomenon emerging from the corporate-military structure whose power and potential reach are depicted in Gravity’s Rainbow. Given the pervasive “connectivity” made possible by the Internet, the mischief such connectivity enables, and the existence of the “Deep Web,” lurking beyond the “surface” web accessible to ordinary searches, it would probably seem odd if Pynchon never did address the development of the web as an all-encompassing presence in American life. Although much of Pynchon’s fiction employs a historical setting, works such as Crying of Lot 49, Vineland, and parts of V examine the present circumstances (at the time) of American society. Even the historical novels are not really concerned with history per se but with the ongoing continuities between past and present, the portents in the past of what in the present has become only more ominous.

Thus Pynchon’s new novel, Bleeding Edge, comes to us so instantly recognizable as a work by Thomas Pynchon that after we have read even the jacket copy (or any of the publicity materials), we might feel we have read this novel already. It does indeed tell a story set in New York City immediately prior to the 9/11 attack on the World Trade Center, and the story does traverse some of the darker regions of the Internet, which in 2001 was a more mysterious, if less enormous, place than it is today. And, as we likely suspect, the attack is surrounded by its share of possible shadowy participants, making it even more nefarious and frightening than the official version would have it. The Internet, particularly in the environs of the Deep Web, is a zone of unreality whose best and worst qualities are that it reinforces the unreality of the “real” world. The cyber reality in which Pynchon’s protagonist, Maxine Tarnow (a “fraud investigator”), finds herself enmeshed focuses her attention on the sheer lunacy of the reality we Americans have created for ourselves at the same time it promises to intensify that lunacy.

Maxine handles the paranoia-inducing discoveries she makes about the lengthening tentacles of oligarchical control and an underworld of secretive cyberspace with rather more equanimity than do most of Pynchon’s previous protagonists, who of course inhabit similarly paranoia-soaked worlds. As with many of these characters, following Maxine through such a world reveals why paranoia is a justified response to modern experience, and through her Pynchon works to give shape to the paranoid outlook. Considering that she is also struggling with professional setbacks (her Certified Fraud Examiner license has been revoked and she is now working freelance) and family problems (she is separated from her husband and raising two children on her own), Maxine steadfastly maintains her purpose in investigating the affairs of Gabriel Ice, a financial wheeler-dealer whose activities lead Maxine to websites involved in abetting his fraudulent financial transactions but that also lead her to other denizens of the Web, some clearly sinister in their intentions, others more benign, technogeeks motivated by the sort of idealism that seemed to accompany the early days of the Internet. In part, Bleeding Edge shows how that idealism was inevitably going to be submerged by the overwhelming force of American profit-making, destined to be the handmaiden of oligarchs like Gabriel Ice. The initial dot com boom and bust, the immediate precursor to the events in Bleeding Edge, was just the presage to the complete commodification of the Web.

Not only is Maxine Tarnow impressively reliable as our guide through this cyber underworld, as well as pre- and post-9/11 New York, she is probably the most compelling, fully-developed female character in all of Pynchon’s fiction. She plays the same role as P.I. Doc Sportello in Inherent Vice — both novels could be seen as variations on the detective novel — and she is at least as tenacious as he is, her efforts as effectual in “getting to the bottom” of the situation she confronts — although finally in neither novel is there really a “bottom” to the possible depths of contingency and corruption they otherwise do make visible. Certainly both of these characters are more effectual than Pynchon’s schlemiel characters such as Benny Profane and Tyrone Slothrop, although in some ways it is the latter two’s slacker-like qualities that make them as appealing as they are. Maxine Tarnow has her undignified moments (especially where sex is concerned), treated with the usual Pynchonian slapstick comedy, but finally she seems perhaps the most self-possessed adult character Pynchon has created.

Still, it may be Maxine’s strengths as a character that make the familiarity of Bleeding Edge’s narrative less a sign of the continuity in Pynchon’s work than of lagging inspiration, a willingness to go with the expected plot devices. If Maxine is a more rounded character than we have come to expect from a Thomas Pynchon novel (to say that for the most part he has relied on caricature and other forms of comic flattening is not a criticism), the story for which she provides the focus seems curiously less interesting than she is. Pynchon has given us this different kind of character only to involve her in the same kind of paranoia narrative experienced by Oedipa Maas or Tyrone Slothrop, but since Maxine has a different relationship to this narrative, the effect is to make it almost perfunctory, simply the sort of thing a Pynchon character must undergo.

Oedipa and Slothrop are subjected to the forces prompting the paranoid response in a much more threatening way (especially Slothrop, who at the end of Gravity’s Rainbow almost literally falls apart), threatening both physically and psychologically. Both are profoundly affected by what they discover and by the events unfolding around them. It could be said their whole way of being in the world is altered, as is, potentially, the reader’s as well as a result of witnessing these events (or at least their impact on the characters). Maxine is certainly affected by what she discovers, but she seems to find her experiences less personally unsettling, less likely to force an existential crisis, however extreme they may be. Often Maxine acts more as an observer of the spooky world she encounters than as someone irredeemably spooked by it. The ultimate effect is that, on the one hand, Maxine consistently proves a steady navigator through this world, but, on the other, her stability of perception also makes the novel something closer to straight satire or even a kind of journalistic expose than one would expect from the author of Gravity’s Rainbow.

475 pages worth of cultural satire can come to seem a bit excessive, although not in the sense that the novel goes too far but in the sense that it attempts too little beyond drawing our attention to cultural folly. Portraying the deeper dangers of such folly while also suggesting it is quite likely to persist has always given Pynchon’s more satirical impulses an extra edge, taking his fiction beyond conventional satire into what in the 1960s was called “black humor” but in Pynchon’s case encompassed a more distinctive kind of comic vision that combined low-brow, farcical humor and existential dread. In Bleeding Edge the danger seems muted because it doesn’t fully extend to Maxine herself, who is too intrepid to succumb to terminal angst. The humor is still here, but it is more diffuse and sporadic, manifested in wiseacre dialogue and the narrator’s sarcastic asides (usually reflecting Maxine’s sarcastic attitude) rather than through such extended set pieces as, for example, the “Byron the Bulb” episode in Gravity’s Rainbow.

Bleeding Edge is in general a much more dialogue-dependent novel than Gravity’s Rainbow or V. Indeed, much of the novel’s “action” is related not through its direct depiction but by reports conveyed through the dialogue, to the point that this can seem less a novel concerning the events to which it mostly alludes (including the 9/11 attacks) than talk about these events. Some of the talk is mordant and witty in the usual Pynchon fashion, but much of it is surprisingly routine, an impression left only more insistently by the novel’s formal arrangement as essentially a series of scenes organized around verbal exchanges between the characters. Those of us who admire the stylistic audacity and rhetorical power of Pynchon’s prose in previous novels get very little of either in Bleeding Edge, simply because it relies so heavily on dialogue.

Bleeding Edge is a book worth reading simply because it’s by Thomas Pynchon, although anyone contemplating it as an introduction to Pynchon’s work should instead go immediately to V or Gravity’s Rainbow or even The Crying of Lot 49, which, although now apparently somewhat disdained by Pynchon, has long served as a more accessibly condensed example of Pynchon’s literary strategies and worldview. Ultimately, however, Bleeding Edge is not so much “minor” Pynchon as it is a kind of synthetic replica of a Thomas Pynchon novel, all the more disappointing because it was written by Pynchon himself.