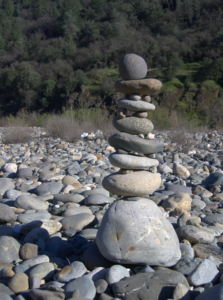 Something happened to me this morning. I was driving to the dogpark in my mother’s Toyota Corolla, which I had borrowed for the day because my 1993 pickup has begun to show signs of decay, when I saw one of those small piles of rocks that people often make out of boredom while stranded on deserted beaches or hiking desolate trails. What, I wondered, are those small piles of rocks called!? I knew those piles must have a name, I just couldn’t remember it.
When I got home, I googled “What is the name for those small piles of rocks that people make,” and the first search result, out of some 15,000,000 found in 0.40 seconds, was the wikipedia page for “Cairn.” Of course, I thought, the answer to my question is a Cairn.You, reader, do not need to know this. You do not need to know any of this. My whole story about this morning, the dogpark, the mysterious pile of rocks that I didn’t know the name of — all of these trivial things that happened to me that I then took the time to write down, it’s all, in a sense, useless writing. And while Wilde remarks that “The only excuse for making a useless thing is that one admires it intensely,” it is my opinion that, in the case of my story about Cairns, there’s little to admire. In other words, I’ve wasted your time.

But, on the Internet, I’ve noticed, people waste each others’ time all the time. It’s like some kind of weird favor that we do for one another the way that dogs every now and then will behave in a way that, if we were to anthropomorphize their behavior, might sound metaphorically like they were wasting each other’s time. On the Internet I often read bad, useless writing, and then keep reading and sometimes even keep reading after that, beyond the point when my frontal lobe, if functioning properly, should have stopped me. The fact that such useless reading of useless writing feels OK with me is, I guess, evidence that both reading and writing are sometimes much like building and looking at Cairns.

Sometimes, while reading something rambling and bad, I’ll wonder to myself: what’s all this even about? It turns out that a lot of writing is mostly written to satisfy the writer, who, for whatever reason, wants to write. The upshot of this is that, in addition to lots of strange and, for lack of a better word, bad writing, there’s also a lot of really interesting, intensely satisfying writing, all of which hangs out in sometimes unexpected places around the Internet, especially in the comments sections of websites like Amazon. So here are three of my favorite well-written reviews. One is a review of a review. Who knows, maybe someday someone will excerpt my review of review of reviews…

“My first foray into the No Show Socks market had been a generic brand from my local department store. Drunk on the success of that purchase, I figured any product that had “No Show Socks” in the title would be similarly transformative. And when this 6-pack of Adidas Men’s No Show Athletic Socks arrived in my mailbox, I tore the box open like a kid on Christmas. I ripped off the ankle-high socks I was wearing around the house (don’t currently have enough No Shows to waste on sleeping) and put on a pair of my new Adidas socks. I was in such a hurry that I put my sneakers on as I was opening and shutting the door behind me.”

Brian D. gives the Frick Art collection 2/5 Yelp stars, in part because “in the middle of the gallery there’s a table with some decorative statuettes on it, so if you try to look at the opposite Turner there is a centaur abducting a woman and blocking your view.” I give Brian’s review 5/5 stars, and the same score to his brief write-up of going to see performance art at the Williamsburg restaraunt Isa…

Right here at Full Stop we’ve had our own case of reviewer Ouroboros.

A while back, a commenter named Jack Read dropped a bomb, 12-paragraph write-up at the end of one of the site’s book reviews. Read’s comment, IMO, was at least as interesting as the review he reviewed, and I mean that with all due respect to the writer — I’d be honored if someone took the time to give me graf by graf feedback on my product… what is the internet becoming, a free MFA program?! Maybe Jack Read (a suspicious enough sounding name) is actually someone like Thomas Pynchon or Annie Dillard, procrastinating or for whatever reason donating some thoughts to the plebs like us. Thanks Read, for shining your light on all of us! I’ll take reading your comments any day over watching a small, useless stack of igneous rocks!