Swim for the Little One First – Noy Holland 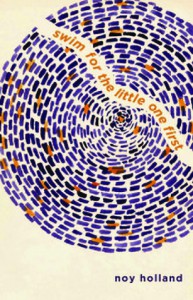 The influence of Gordon Lish as teacher and editor on numerous American writers is well known (more so than his own fiction). Although this influence has extended to a wide range of writers, from Raymond Carver to Harold Brodkey, one group of currently notable writers seems to be especially sensitive to Lish’s influence. Writers such as Gary Lutz, Diane Williams, Christine Schutt, and Noy Holland palpably employ, in somewhat different but observable ways, the strategy Lish calls “consecution,” the focus on constructing and linking sentences by considering sound and rhythm as well as sense. Indeed, these writers no doubt take the strategy farther than Lish himself ever intended, resulting in short stories (all but Schutt work almost exclusively in the short story, but her best work may also be her short fiction) using a mode of composition that produces an alternate principle of structure and form through which “character” and “story” are not abandoned but emerge as the afterthought of the movement of language, the characters and plots subordinated to the autonomy of that movement.

From this shared commitment to more fully exploring the linguistic resources of the sentence as a literary device, each of these writers draws on those resources in their own way, with different stylistic signatures that also create divergent larger-scale formal effects. Although all four writers work in narrative fragments, Williams’s stories are both the most highly compressed and the most elliptical. Her brief fictions especially require very close attention to the materiality of their sentences (including their sound), each one of which might be an episode in itself, the interval between them a leap in time or place. The same is true of Lutz’s early work, although more recently his stories have gotten longer, even if Lutz’s own sentences are more notable for their utterly singular wordplay than for advancing clearly discernible plots. Lutz is perhaps the writer among this group who has most intensively developed the strategy of consecution taken from Lish and, in fact, has developed it well beyond what Lish could have had in mind, while Christine Schutt might be described as the most “lyrical” prose stylist (although her prose is ultimately not so conventional in its carefully cadenced lyricism, which in its way is as sensitive to the intricacies of sound and syntax as Lutz’s more unpredictable sentences). Schutt’s novels in particular come closest to fulfilling traditional expectations of plot and character, but the reader who approaches her fiction simply for its narrative interest and who fails to appreciate what Lutz, in his essay “The Sentence is a Lonely Place,” calls the “page hugging” appeal of Schutt’s writing will surely miss out on a significant element of its achievement and appeal.

The stories in Noy Holland’s new book, Swim for the Little One First, are not as brief as Williams’s pieces, although they do have something of their enigmatic quality; they are not as verbally adventurous as Lutz’s stories, which does not mean they are less scrupulous in their attention to language; they do not develop plot and character as transparently as Schutt’s fiction does, but Holland incorporates linear narrative more than either Williams or Lutz. While such short pieces as “Blood Country” and “The Last Doll Never Opens” could be described as closer to surreal fables (or even prose poems), the most evocative and most compelling of the stories in Swim for the Little One First are the longer ones, generally both more extended in time and more specific to place. In these stories, a cogent narrative generally does emerge, unfolding as well in a recognizable setting, often the American West. However, because they are developed through extremely truncated fragments (sometimes only a single sentence), containing little in the way of direct exposition, the stories can seem impressionistic and elusive. With some, it is only after coming to the end of the story that one realizes Holland’s individually arresting sentences have told us a story after all.

The book’s first story, “Pachysandra,” works in this way. We track the narrator as she returns to her girlhood desert home to care for Rose (presumably her sister, although the relationship remains somewhat oblique). While there, she begins a sexual relationship with Rudy—“the help”—by whom she becomes pregnant, but subsequently she terminates the pregnancy (“I went to the hospital and had them scrape what Rudy gave me out”), even though at the beginning of the story she had been trying to become pregnant with her boyfriend, Tonto. We are not likely to forget this introductory episode, since the narrator’s activity is presented to us in an especially memorable formulation:

I was lying on my back with my legs in the air trying to make a baby with my mister. I had his seed in there. My poor egg had stepped out to meet it.

By the end, the narrator has changed her mind about this effort:

I would not have been much of a mother. I went for shitbags. I liked to sleep late. I liked people who could work their own spoon.

While sentences like these do not exhibit the breaks in logic or continuity that frequently make Williams’s sentences so startling, or lead to the linguistic transformations that make us stop and linger over Lutz’s, they are surely not submerged into the ordinary flow of expository discourse characterizing most conventional narratives. They indeed ask us to pause and appreciate the way they avoid familiar phrasing and routine idioms in favor of a directness of expression both trenchant (“I liked people who could work their own spoon”) and almost ingenuous (“I had his seed in there”) but that also encompass unorthodox but quite satisfying figurative turns (“My poor egg had stepped out to meet it”). Because it does seem the expected sort of invisible prose has been deliberately avoided, passages such as these can seem odd or eccentric, but upon reflection we can only conclude they are in fact quite precise and evocative, fully coherent, if self-enclosed, in their fidelity to the isolated moments they attempt to invoke.

Since they provide us with more such moments, the longer stories afford us more opportunity to appreciate what such passages are up to, as well as the way Holland assembles them into narratives in which much of the story occurs in the gaps between these articulated moments but are if anything more powerful because of that. “Luckies Like Us” ultimately relates the story of a family that has suffered devastating misfortune, focusing on the aftermath of an automobile accident that has left a son in a vegetative state. The story alternates between moments centered on the perspectives of the mother (who feels responsible for the accident), the father, and a daughter. The overlapping of perspectives allows us to integrate the characters’ ongoing attempt to cope with their situation with the “backstory” that has produced it, a strategy that, along with Holland’s stark and pointed language, makes what could be a potentially sentimentalized, emotionally facile story resonate through an emotional restraint that is ultimately all the more effective in conveying the family’s desperate plight. Indeed, Holland’s stories do not indulge in easy emotions, even if the bleak emotional atmosphere in many of them can be chilling. The characters face difficult circumstances and often suffer grim fates, but they neither struggle heroically to overcome their difficulties and thus inspire our admiration nor merely succumb to them passively and provoke simple pity. They do what they can, which more than anything else also makes them seem intensely human.

“Merengue” presents a decidedly non-sentimental portrait of a senior citizen community in Florida whose residents once led vital lives, but

Now they went about on tricycles and wheelchairs, the want to drift still in them. The old women played bridge and bickered by day and by nightfall slept with the louvers pinched shut. The old toms howled on the beach at night. The old men fished with kittens.

The area itself has seen better days as well. Once “starlets arrived in gold lame with their hair heaped up on their heads,” but then “the young went elsewhere. The sea ate the beach. Hotels were looted, emptied out but for squatters with their shopping carts and rags.” Two wandering lovers, Jack and Mary, arrive “from the land of head-high corn.” Mary is pregnant, about which Jack is, to say the least, ambivalent. Jack eventually becomes impatient with his new surroundings as well, which seem to him “like a nursing home without nurses,” but Mary is taken up by the old men, on whom she does seem to have a softening effect. Mary is subsequently gang-raped by local teenagers, and not only loses her baby but is told she will no longer be able to have children (her fate inviting a contrast with that of the narrator of “Pachysandra”). The story is the longest in the book, and it shows how Holland’s sentence-based fragments can very effectively expand over a larger canvas, creating an ultimate depth of character and situation that, in this case, makes the story’s somber conclusion affecting without descending into melodrama. “Merengue” has the length of a short story, but some of the scope and density of a novel.

The best story in the book, the title story, has a similar scope and density, although it is about half as long. It is also the most formally interesting work in this collection. At first we are tempted to think the narrator is addressing us in the story’s first few lines:

How nice you could come to visit. See our home, how we live, how the leaves sweep down. The fields green still.

We turned out clocks back. I brought squash in, tossed a sheet across the withering vines. We’re to expect a frost once the wind quits, wind from the north, flurries. A chance.

We’ll move the rabbits in the morning, light the stove. Chicory in your coffee, honey how you like. On the radio the news.

It becomes apparent, however, that the narrator is addressing her father, who has come to live with her. The story continues to be told as a direct address to the father, during which his frayed relations with his family are revealed to us, including a troubled relationship with his only son, the narrator’s brother, which culminated in the son’s suicide. In the compressed time of its telling, as the father is moving in, we nevertheless learn much about the family history and especially about the brother’s suicide, the details of which seem irrepressibly to emerge as the narrator speaks on, showing the father around the house. The family’s life is nicely captured in the story’s final lines:

It there is anything you want — someone will get it for you.

My daughter will. Your wife will, or I will. Somebody always has.

Even as the narrator summons up the past and evokes the present, her words come to us shaped by Holland’s attention to the rhythms her sentences set up both within and among themselves (and to which she clearly pays great attention), as well as to such auditory qualities as alliteration (“Chicory in you coffee, honey how you’d like”) and to rhetorical devices such as repetition. Swim for the Little One First confirms Noy Holland to be a writer who can start with this sensitivity to language and use it to build formally intricate fictions that are also a great pleasure to read.