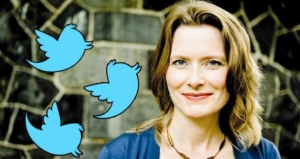 Egan is not the first writer to have a story published on Twitter.  Other high profile examples of Twitter fiction include Rick Moody’s “Some Contemporary Characters,” published by Electric Literature’s Twitter feed, @ElectricLit.  Also, arguably, the whole @MayorEmanuel Twitter was an ongoing exercise in long form fiction, the novel or novella-length counterpart to Egan and Moody’s short stories.

@MayorEmanuel, structured as a Twitter feed (and probably conceived of as one before diving completely into a fictional universe), had the most potential for interaction.  Despite the quality of Egan’s work, she gets comparatively few favorites and retweets — and most of the retweets are truisms that work out of the context of the story, for example, “Kindness feels good, even when it’s based on a false notion of your identity and purpose.”  (That piece, if transliterated into all caps, is a Jenny Holzer tweet,) — and almost no “@” replies.  It’s no matter, because her use of the second person completely and utterly captures the spirit of Twitter.

The story, called “Black Box,” follows a character from Goon Squad named Lulu into her and our future.  She is some kind of spy, doing some kind of work.  Lulu has a number of sub-epidural implants that aid her spy work and allow her to record little messages just by thinking them.  Egan wrote the story as a series of these short (140 characters or under!) recordings, or missives, or lessons, or directives, or messages. It’s unclear how the messages are being transmitted or who they are being transmitted to.  The only thing that is very clear is Egan’s fantastic use of the second person.

Usually, I hate the second person.  I avoid stories and novels and authors that employ it.  It bugs me viscerally, for reasons I don’t understand.  But it took me almost half a night’s worth of tweets to realize that Egan was using it, because it fit so naturally in with the medium of the story’s dispersal.
Twitter is a medium of conversation, yes, but it’s also a medium of brief exclamations, thoughts and moments. It has little ideas pushed forth towards a (hopefully) receptive audience.  Egan makes the second person feel like the only way to write a Twitter short story (my apologies to Moody), reaching outward to everyone following on their Dashboard, speaking towards them, pushing outward to a (very) receptive audience.