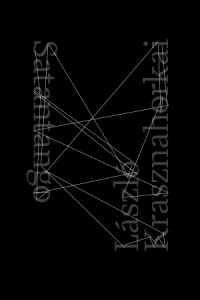 Trans. from the Hungarian by George Szirtes

My life, my life, now I speak of it as of something over, now as of a joke which still goes on, and it is neither, for at the same time it is over and it goes on, and is there any tense for that? Watch wound and buried by the watchmaker, before he died, whose ruined works will one day speak of God, to the worms.

The comparisons have been made by all the right people. W.G. Sebald set him alongside Nikolai Gogol. Susan Sontag placed him with Herman Melville. Yet it was James Wood’s New Yorker piece last summer that more accurately located the Hungarian author László Krasznahorkai as being most akin to Samuel Beckett.

They certainly occupy the same failing house of language, squalid in disrepair, hinting at something slightly beyond itself. Which is to say that Krasznahorkai is avant-garde. His prose is formed like a fractal: self-similar patterns where every sentence exceeds its topological dimensions to become a microcosm of the entire work. We definitely hear Beckett in him.

In Molloy, Beckett had to create a new tense to describe events that are already over, and yet go on. Krasznahorkai uses similar techniques to describe events that are happening, and yet haven’t begun. His stylistic idiosyncrasies may explain why Krasznahorkai is, for now at least, more popular in Central Europe and Germany than America. Hungarian filmmaker Béla Tarr seems to be on a mission to adapt each of his books into film. Allen Ginsberg was an American admirer; Krasznahorkai lived for a while in Ginsberg’s apartment, enlisting his help to finish the novel War and War. At fifty-eight, Krasznahorkai has won some awards, is nearly always shortlisted for others, and may still be in his prime. All this and only very recently are we getting translations of his work over here. He’s been publishing since 1985.

In his third novel to be translated to English by New Directions, Santantango, we find an unnamed Hungarian collective farm descending into a despondent uncertainty after the fall of the Soviet Union. It’s an estate full of the worst sort of people. There are cheating spouses and self-righteous religious fanatics. There are hermits, thieves, liars, and violent brutes. There is vanity, pettiness, delusion, and callousness. It’s a bestiary of pathetic individuals worthy of Chaucer, Dickens, or some of the more involved Bob Dylan songs.

And the thing all these characters have in common isn’t the salvation they hope for from the false-Christ-of-a-traveling-con-man Irimias. Some doubt him. It isn’t station in life – they all come from different backgrounds. It isn’t even a sense of hope, because some people have moved beyond hope to a resigned acceptance of doom. What binds all these people together is mortality. And like the title and structure of the book suggest, the dance that everyone is trapped in is the dance of death.

The novel is divided into 12 chapters, each one representing a step in the dance, moving forward and backward in time, but all of the action taking place in the same pathetic gloom. As the elements move in, and the wind and rain ruin people or leave them stranded, the novel’s language accumulates strength. Each chapter being a breathless paragraph, Krasznahorkai compounds action on top of action, never reaching anything like a crescendo but always conveying a sense of foreboding. As the landlord thinks to himself in the book:

“Something might have happened.” But what, precisely happened, that could only be determined by a maximum, joint effort, by hearing ever newer and newer versions of the story, so that there was never anything to do but wait, wait for the truth to assemble itself, as it might at any moment, at which point further details of the event might become clear, though that entailed a superhuman effort recalling in what order the individual incidents comprising the story actually appeared.

Krasznahorkai’s effort really is superhuman. And although the details of what unfolds on the estate over the course of a few days do become clear, the action is dreamy and touched by the unreal. The weather mirrors this in its thick white fog, torrential rain, and violent thunder. The elements of life itself trap everyone where they are, keeping them from believing deeply in any sort of escape. But surely they have to believe in order to live. And so you see the dance performed by the strangest pairing of all: not just drunken villagers with their own wasted and futile ambitions, but between life and death, both as inescapable possibilities.

A text in translation that retains its ability to disturb and provoke you without losing any subtlety or beauty also has to be the work of an exceptional translator. Take this sentence from Satantango, for instance:

Grumbling and ever more embittered, they roamed through the deserted halls of the moribund building, exploring in somber chaotic fashion the dismantled parts of rusted machinery and in the funereal silence the suspicion grew in them that they had been lured into a trap, that they were, all of them, naive victims of a low plot to dump them there, homeless, deceived, robbed, and humiliated.

His eyes wanted to seize the Eternity at once, but in his excitement he could only concentrate on the ‘maddening sequence’ of the Details.

Krasznahorkai’s translator, the poet George Szirtes, is wonderfully gifted. I wish that I knew Hungarian so that I would be able to say this with absolute authority, but what I do know is that the English translation conveys that Satantango is literature of the highest order. Both sentences quoted above are well-crafted and pleasing to read, but there’s something more than that. I have to return to the image of the fractal: these two passages simultaneously convey information about themselves and speak to the nature of the work as a whole.

Satantango is a novel in which every sentence is a thesis. Its scope is huge, more than we’re used to reading in the latest American high-brow diversions that we mistake for literature. In all his work Krasznahorkai tries, and fails, to resolve the essential problems that we have the good taste nowadays to mostly ignore. And like Beckett, he keeps failing better.