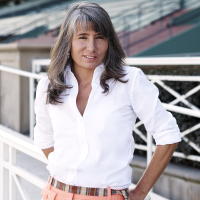 Yannick Murphy is the author of a number of novels, including The Call and Signed. She has also published two collections of short stories and a number of children’s books, including AHWOOOOOOOO!

Literature shouldn’t have to respond to anything, but it should be about upheaval, whether it’s popular or not. All good stories should have a character or characters who are fighting against something or coming into conflict with something, whether the conflict is with themselves or with others. Literature’s main responsibility is to reveal something in a way that has never been revealed before, in the most accurate way possible.

Writers should write for themselves, if it doesn’t engage the writer, then the writer has no hope of engaging anyone else. I don’t know about audiences for serious writing. I know that people I know are still interested in good writing, and the more people I meet, the more I learn they have the same desire to read quality work.

It’s always fascinating to know that people are reading and thinking about my work, especially when I’m not thinking about others while I’m writing it. The writing seems to take on a different life when it’s seen through the eyes of others, but a critic’s opinion of my work never seems to factor into how I write my next book. Literary criticism does seem like it’s in the hands of more lay people now, but I like that, it tells me readers care enough about writing to voice their opinion about it.

You don’t become a writer to pay the rent. If you do make money at writing, then you’re not only a writer, you gain an extra word in your title, and you become a  “lucky writer.”

My writing is an expression of myself that I hope resonates with others.

I’m not sure I’m the best person to ask about that. I don’t read enough contemporary fiction to know the current political tendency of American writing. I re-read War and Peace recently, and the political climate then was just as fascinating as it is now.