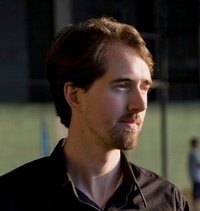 James Boice is the author of three novels: MVP, NoVA, and, most recently, The Good and the Ghastly, which we reviewed last year.

Literature has no responsibilities except to CAUSE popular upheaval.

More and more I have a better idea of who I am writing for, or more so who I am not writing for. It’s very freeing to write with a specific type of reader in mind and not for everybody. Books are like music — not everybody likes the same types. Just because someone likes music doesn’t mean they will like everything. It’s weird how if you like books, you’re thrown into this weird mass bin of others whose tastes are 100% different from yours, for no reason other than they also like books, and you’re expected to get along.

It’s very homogenous. All fiction is only broken into a few big categories — popular fiction, mainstream literary fiction, and indie fiction — when people’s tastes are so fragmented and particular. There should be 1,000 subcategories for fiction, just as there is for music.

And that’s happening more and more every day. It’s great. Having just six publishers, a few booksellers, and just one or two sources for people to find out about new novels — NPR, New York Times — made no sense. And so it’s changing, because we the people are willing it to.

I like when people say nice things about my books because I spend so much time on them and have no idea if anyone will get them. But I take both positive and negative criticism with a very large grain of salt. It’s one guy’s opinion, no matter if that guy is James Wood or someone on Amazon. It’s one guy. If someone’s critical comment really bothers me, then I wonder if maybe he/she is correct. Otherwise I try not to let anyone’s comments — good or bad — affect how I feel about my work or myself. I skim the reviews I get, but don’t read them very closely and quickly forget about them as I move on to a new project. Books last forever — reviews don’t. Writers live forever — critics don’t.

Haven’t made a living at it yet, but I will. There is a place for it if you’re good enough at it.

It is the expression of myself as an individual staggering through life, feeble and foolish but trying to be honest and prudent and good and to learn and keep my head above water and maintain my integrity. I try to share my experience of life. All of what I write is very close to home for me. It is the prism through which I experience the world.

Hyperbolic. Everybody’s got an opinion. As far as journalism, there are far too many outlets and too many people trying to make a name for themselves as journalists — and too little actual news. It’s a dungheap. So 98% of it is manufactured fake news of no consequence, even though it seems otherwise.

As for literary fiction, that world has always been dominated by people who lean left and probably always will. I don’t think that has changed since 2001 or ever will. So there have been no changes in its political tendencies.

From our perspective, the War on Terror represents man’s eternal battle against Death. And Evil. It wants to come out of the blue and lay waste to our peace and happiness. And it has — and partly because we have opened the door for it by being international thugs. So we are complicit in our own troubles. Because man is flawed and fallen. So this is nothing new. It’s all something that could have been written about in the Bible or Shakespeare or Stephen King. It’s classic literature.

From the perspective of the religious lunatics trying to kill us, of course, it’s classic too: David and Goliath. It’s Rocky.

A writer has no responsibilities in unending war except trying to end it with his words. Social upheaval — in a good way.